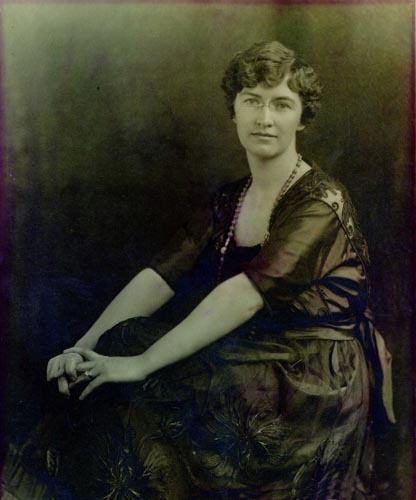 Gertrude Dills McKee, homemaker, clubwoman, and state legislator, was the first woman to serve in the North Carolina Senate. She was the second of three daughters of William Allen and Alice M. Enloe Dills. Her father, a businessman and politician, founded the town of Dillsboro on a portion of his farm that overlooked the Tuckasegee River in Jackson County; in 1889 he represented Jackson County in the state house of representatives.

After attending the local public school, Gertrude Dills was graduated from Peace Institute in Raleigh in 1905 as president of her class. Later she was awarded an honorary doctor of laws degree by the Woman's College of The University of North Carolina. On 13 Aug. 1913 she married Ernest Lyndon McKee, a widower of Sylva and the father of a son. They became the parents of two sons, William Dills and Ernest Lyndon, Jr. The elder McKee, a businessman, was president of the Sylva Tanning Company and the Dillsboro and Sylva Electric Company; he also was a director of a building supply and lumber company and vice-president of a bank. In 1922 the McKees purchased High Hampton Inn, a leading resort hotel in western North Carolina.

Between 1926 and 1928 she was president of the Southern Council of Federated Club Women, and between 1927 and 1929 she served a term on the County Government Commission. During the latter period she also was president of the Southeastern Council of Federated Club Women, composed of thousands of members from eight southeastern states. In 1931 she became a member of the Commission for Consolidation of The University of North Carolina. Between 1933 and 1935 Gertrude McKee was chairman of the Jackson County Board of Education, for a time was a member of the State Board of Public Welfare, and at different times was a trustee of Western Carolina Teachers College, Peace College, The University of North Carolina, and Brevard College. Active though she was in these areas, Mrs. McKee was involved in the Sylva Methodist Church, where she played the piano and sang in the choir. She also was noted locally for her skill as a housekeeper and as the baker of excellent cakes.

In 1930 the Democratic party nominated Gertrude McKee for the state senate. After campaigning through the three counties of the district, she was elected by the largest majority of any candidate on the ticket. She not only served this first term (1931–33) but also was elected to two other terms (1937–39 and 1943–45). She resigned on 8 Apr. 1943 following the end of that year's session. She was reelected in 1948 but died a few days after the election.

In the legislature Mrs. McKee sat on a number of committees, including Appropriations; Education; Election Laws; Finance; Internal Improvements; Manufacturing, Labor, and Commerce; Institutions for the Deaf; Mental Institutions; Pensions and Soldiers' Home; Public Health; Conservation and Development; Library; and Printing. As chairman of the Public Welfare Committee during each of her three terms, she pioneered welfare programs that served as models for other states. As a vocal proponent of education, she constantly fought to equalize educational opportunities for children throughout North Carolina. Outspoken in her belief that all pupils should complete school at least through the sixth grade, she secured passage of a bill towards that end despite opposition from several of her male colleagues. She was buried in the Keener Cemetery, Jackson County.