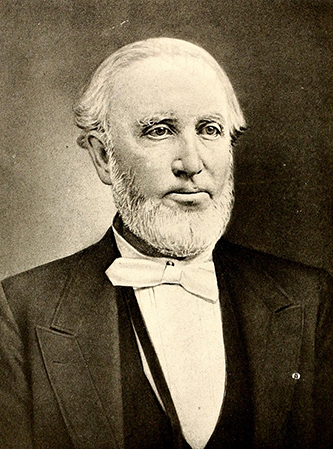 Neill McKay, Presbyterian minister, was born at Flint Hill on the Upper Cape Fear River in Cumberland (now Harnett) County. His mother, Flora McNeill (1785–1868), was the great-grand-daughter of Neill McNeill (called "Black Neill" to distinguish him from the redheaded Neill), who from Argyllshire, Scotland, led 350 highlanders to Wilmington, landing in September 1739 and going up the Cape Fear to Cross Creek, Bluff, and Little River. Neill McKay's maternal ancestors also included John Smith, who lived in the Cape Fear section by 1736 with his celebrated daughter Jennet (Jennie Bahn); Archibald McNeill, an early leader of the Fayetteville Presbytery; and Colonel Alexander McAlister, a church leader and Patriot. Neill's father, Neill McKay (1776–1830), was one of the founders and first two elders of Tirza Presbyterian Church (1811–12); his paternal great-grandfather was Alexander McKay who came from Scotland in the 1730s and from whose home Longstreet Church on the Yadkin Road in Cumberland County was founded in 1758. The Reverend Neill McKay was one of ten children, most living to adulthood; one sibling, Dr. John Wilson McKay, was a South Carolina physician and a business partner of Neill in the successful turpentine and naval stores industries.

Following the Scottish tradition of rigorous education for its ministers, Neill McKay was educated at Donaldson Academy (chartered in 1833), in Fayetteville, where he was tutored by Dr. Simeon Colton, an outstanding educator and minister from Massachusetts. From Donaldson, McKay entered the sophomore class at Princeton in 1835, joined the Whig Society, and during his junior year was "suspended for fighting" with another student over the issue of slavery. On 7 Mar. 1837 he was "restored to College" but withdrew and entered the senior class at Union College in Schenectady, N.Y., graduating in 1838. He enrolled in Columbia Seminary, S.C., that fall and was graduated in 1841. Licensed to preach on 27 Mar. 1841, he was ordained by the Fayetteville Presbytery on 13 November.

Described after his death as "a staunch Calvinist, a theologian of the old school type," McKay was associated with some of the historic churches in the Cape Fear Valley. He was the sixth minister of Buffalo (1845–70), the eighth minister of the Longstreet Church (until 1856), the first minister of Flat Branch (founded 1873), and the first minister of Dunn Presbyterian Church (founded 1889). He also served the churches of Salem, Mount Pisgah, Sardis, and Sandy Grove; he was intermittently the minister of the Summerville Church after its reestablishment in 1848 (formerly Tirza), especially during the late 1870s and 1880s. Throughout his half-century ministry, he was a leader in the synod and especially in the Fayetteville Presbytery as moderator and preacher. Of his extant sermons, A Centenary Sermon, delivered at Bluff Church on 18 Oct. 1858, was published by the Fayetteville Presbytery (1858). Eleven other sermons in manuscript include "Slavery and the Obligation of Masters," "Depravity," and "The Errors, Absurdities and Impositions of the Romish Church." He was one of the founders of the North Carolina Presbyterian (established in 1858), first edited by the Reverend George McNeill and Bartholomew Fuller. This periodical became the Presbyterian Standard.

Again following the Scottish Presbyterian tradition, Neill McKay was committed to Christian education. Largely through his efforts the Cumberland Academy (later the Summerville Academy for Boys) was organized in the early 1840s with the Reverend James Johnson as the first principal. From 1848 to 1853 the second principal, Dr. Simeon Colton, McKay's old tutor at Donaldson, brought it into prominence. The Reverend J. C. McNair, the third principal, added a strong science department to the curriculum. The Summerville Academy was the site of the selection of the first Harnett County officials, and court was often held there.

McKay's interest in education was not limited to parochial schools. In 1862 he was elected to the board of trustees of The University of North Carolina, serving until 1868; under the constitution of 1868, he was one of the five members from the old board elected to the new. In 1869, during some of its darkest days, the university conferred on this "prominent and influential Presbyterian minister of Harnett County" a doctor of divinity degree. In 1870 he was made an honorary member of the North Carolina Historical Society and elected a member of the executive committee of the university board of trustees, being one of two members reelected to the board that year. According to Kemp Battle, McKay was active in seeking the university's restoration during the four years after it closed in February 1871. In July 1873 at the State Educational Convention (convened at the request of the State Board of Education), he introduced a resolution stating that the "revival of the University at the earliest practicable moment is essential to the thorough improvement of the education of the people." At that convention, he was appointed to the Committee on the University; in.1874 he was elected a member of the board of trustees, and in 1875 he became a member of the Visiting Committee to evaluate teaching and curriculum. According to one contemporary source, he was considered for the presidency of the university but declined in favor of his calling as a minister. He served on the board of trustees until his death.

In 1845 McKay built a home called Summer Villa in the village where he was an extensive landowner and, by the 1860 census, the largest slaveholder in the county. He was a life member of the American Colonization Society (1851); at the time of the Civil War, he gave land or equivalent sums of money to his former slaves. Most remained nearby, and he helped them build churches and often preached there when they were without ministers. When Harnett County was formed in 1855, Neill and his brother John built a courthouse at Toomer (now Summerville), hoping to assure that location as the county seat, but by vote in 1859, Lillington was chosen.

Neill McKay died in his home in Summerville after a two-year illness and was buried in the Summerville Church cemetery. The chronicles of the Whig Society at Princeton described him as "unmistakably Scotch-Irish in every fibre of his body; genial, bright, companionable, attractive, muscular; of clear and strong opinions, held tenaciously, which he was always ready to argue for or even to fight for." In articles published in the North Carolina Presbyterian after his death, he was remembered as a man of decided convictions, magnetic personality, excellent health, vivacious disposition, and warm hospitality; he was called "an intense North Carolinian."