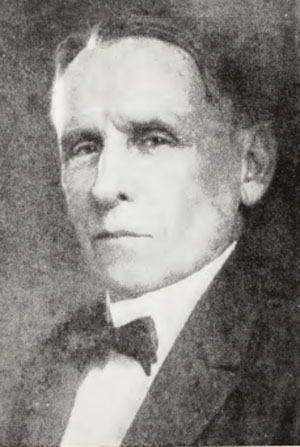 Alexander Worth McAlister, insurance executive and longtime member of the state welfare board, was born in Asheboro, the son of Alexander Carey and Adelaide Worth McAlister. On his father's side, he was a descendant of Scottish settlers; his grandfather, Colonel Alexander McAlister, had served in the American Revolution. On his maternal side, the Worths were Quakers who had descended from John Havland, a Nantucket whaler; his great-grandfather was the brother of Governor Jonathan Worth.

McAlister attended local schools in Asheboro, Bingham Military School in Mebane, and The University of North Carolina where he obtained a bachelor's degree in 1882. He then taught for four years at Bingham School before returning to Chapel Hill to study law for one year. Although he was licensed to practice in 1887, he entered the lumber business in Asheboro with his father rather than pursue a career in law. He soon consolidated the lumber firm with one in Greensboro and moved to that city.

In 1890 he became associated with his uncle, Thomas C. Worth, and with Edward P. Wharton in a new firm, the Worth Wharton Real Estate and Investment Company. The charter for that company became the building block for the later Pilot Life Insurance Company. Following his uncle's death in 1891, McAlister became a partner in the firm and in 1895 he and Edward Wharton established the Southern Stock Mutual Fire Insurance Company of Greensboro. This was the first insurance company established in Greensboro after the Civil War. McAlister brought to the venture his experience as an agent for other insurance companies in the Worth-Wharton company. Because sufficient capital could not be raised, the company began without capital; instead, it had guarantees of $5,000 each from twenty prominent men. Every year the firm's profits were set aside to establish the original capital that had been guaranteed. When sufficient capital had been accumulated, the name of the company was changed in 1899 to the Pilot Fire Insurance Company. Meanwhile, McAlister was instrumental in the founding of three other fire insurance companies in Greensboro: Greensboro Fire Insurance Company, George Washington Fire Insurance Company, and McAlister Underwriters; these, together with Pilot, were often referred to as the McAlister companies. Through these firms he attempted to provide lower rates and better service than out-of-state companies had offered.

In 1903 the Pilot company entered the life insurance field as the Pilot Life Insurance Company. In the meantime, given the success of McAlister and Worth's ventures, other insurance companies moved to Greensboro or were established there, making the city an insurance center for the state and the region. Among these firms were the Dixie Fire Insurance Company and the Jefferson Standard Insurance Company, which moved from Raleigh and eventually subsumed Pilot and many others.

McAlister, who had been vice-president of the Pilot company, became president of Pilot Life in 1908 and remained so until 1931, when he became chairman of the board. He served in the latter position until his death.

The real estate functions of the parent company were assigned to the Southern Real Estate Company in 1904. Under McAlister's direction, that company developed Irving Park in North Greensboro and Sedgefield between Greensboro and High Point. In 1903 McAlister had directed the construction of the tallest skyscraper in North Carolina, the five-story Southern Trust Building in Greensboro. Later, with the development of Sedgefield, he pioneered in creating a suburban home office of Pilot Life in Sedgefield. Modeled after the Tryon Palace in New Bern, this facility offered beautiful grounds and many recreational facilities for employees whose activities were paternalistically overseen by McAlister.

Jefferson Standard purchased a controlling interest in Pilot Life while McAlister was still president. Although that interest was briefly repurchased, Jefferson Standard gained permanent control of the company after McAlister's death and eventually brought it and other companies under the Jefferson-Pilot holding company.

McAlister learned to play golf in 1908 and became such a devotee of the game that he helped establish the Greensboro Country Club and the Sedgefield Country Club, serving as first president of both. In 1910 he published Eternal Verities of Golf.

While his business leadership was highly important, McAlister is as well known for his service to welfare administration in North Carolina. In 1915–16 he was president of the state's Social Service Conference, and in December 1916 he succeeded his father as a member of the State Board of Charities, which in 1917 was renamed the North Carolina State Board of Charities and Public Welfare. By 1919 he had pioneered on the board the concept of the county-unit plan whereby each of the state's one hundred counties had a separate welfare board. He showed constant and detailed interest in the activities of the state board, where he repeatedly served as vicechairman under William A. Blair. He especially opposed the action in 1931 of transferring supervision of county jails from the welfare board to the State Highway Commission. Often referred to as the "father of the county welfare system," McAlister was forced by ill health to retire from the state board in 1944. His memory was honored by a portrait presented to the board in 1946 by the North Carolina Association of County Welfare Superintendents.

During World War I McAlister served for one year as fuel administrator for the state. He was active in religious affairs and, while nominally a Presbyterian, preferred to ignore denominational distinctions. He organized the Church-by-the-Side-of-the-Road, Greensboro, which eventually became the nondenominational Community Church known for its community service programs. He also organized and was first president of the Greensboro Council of Catholics, Jews, and Protestants. Constantly attentive to many civic affairs, McAlister was forthright and articulate in his defense of causes in which he believed.

Although in declining health, McAlister died unexpectedly while he was designing his 1946 Christmas cards, an annual custom prior to each holiday season. He was buried in Green Hill Cemetery after a funeral at the family home.

Andrew Dobelstein, "The Effects of the Reform Movement on Relief Administration in North Carolina: The Contributions of Alexander Worth McAlister," South Atlantic Quarterly 75 (Spring 1976).