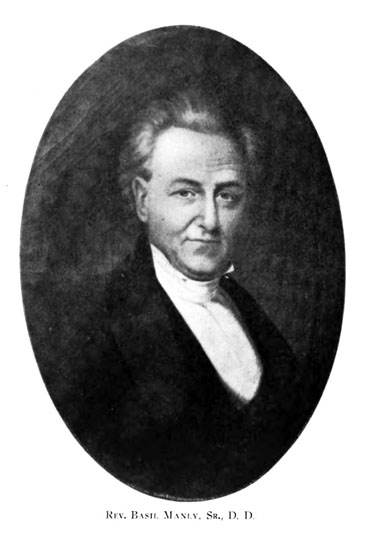 Basil Manly, Baptist minister and educator, was born near Pittsboro, the second of six children of Basil and Elizabeth Maultsby Manly, who had moved to Chatham County from Bladen. His father, originally from St. Marys County, Md., became a captain of militia during the American Revolution. Members of his mother's family were among the early Quaker settlers of Bladen; her paternal grandmother, Ann Carver Maultsby, was the daughter of James Carver, the namesake of Carvers Creek and the Quaker meeting-house of the same name and a benefactor of the latter. Elizabeth Maultsby, however, had become a Baptist in young womanhood, while Captain Manly was a Roman Catholic. This disparate doctrinal heritage was reflected in the denominational divisions among their three oldest children: Charles, who later was governor of the state, was an Episcopalian; Basil was a Baptist; and Matthias Evans, later a distinguished jurist, was a Catholic. The two oldest children were legitimated by an act of the General Assembly in 1799.

Basil received his early education at the Bingham School in Orange County. Soon after his baptism on 26 Aug. 1816, he announced his desire to study for the Baptist ministry. Despite his father's opposition and refusal to assist him, he obtained the necessary instruction and was licensed to preach by the Rocky Spring Church, Chatham County, on 26 Apr. 1818. Shortly afterwards, his natural gifts impressed the Reverend W. T. Brantly, who was visiting the area. Brantly persuaded him to enter the small college in Beaufort, S.C., of which Brantly was president, where Manly could secure financial assistance. 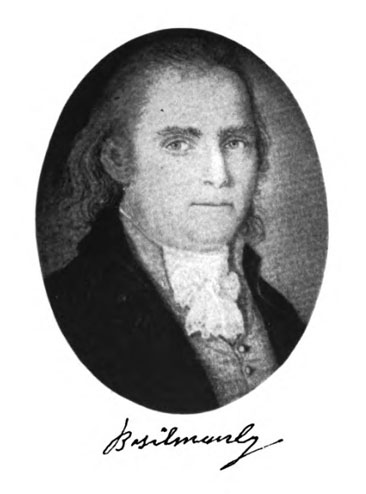 In December 1819, after eighteen months of study at Beaufort, he entered the junior class of South Carolina College, from which he was graduated on 3 Dec. 1821 as valedictorian and honor man of his class. Encouraged by Jonathan Maxcy, president of the college, he began to preach in nearby churches, where his abilities were recognized and his services were much in demand. In January 1822 he moved to Edgefield, S.C., becoming pastor there and at Stevens Creek, a neighboring country church. He joined the latter church, where he was ordained on 10 Mar. 1822 by John Landrum and Enoch Breazeale.

Soon afterwards Manly was elected secretary of the Baptist State Convention and in 1823 was named to the five-man committee charged with selecting a site and completing all necessary arrangements connected with the founding of Furman Academy and Theological Institution, the forerunner of Furman University.

In February 1826 he accepted a call to the First Baptist Church of Charleston, S.C., the oldest and, at that time, the wealthiest church of his denomination in the South. After nearly twelve happy and prosperous years there, having meanwhile declined the presidency of South Carolina College in 1835, he accepted in September 1837 the presidency of the University of Alabama, where he served until 1855. Manly played a leading role in founding the Alabama Historical Society and Judson, Howard, and Central colleges, and he was a promoter of the Insane Hospital at Tuscaloosa. In 1853 he declined the presidency of Furman College, but two years later he returned to South Carolina as pastor of the Wentworth Street Church, Charleston. As an ardent promoter of the Southern Baptist Theological Seminary, he was president of the three conventions (1856, 1857, and 1858) that established it. In 1859 he returned to Alabama as state evangelist, then became pastor in Montgomery.

Manly supported the secession movement whole-heartedly. In 1844 he was the author of the resolutions that led to formation of the Southern Baptist Convention at Augusta, Ga., in 1845, a denominational cleavage occurring fifteen years before the political rupture. On 22 Feb. 1861 he was chaplain at Jefferson Davis's inauguration as president of the Confederacy, riding with the presidential party and delivering the prayer.

In 1863 Manly returned to South Carolina, where he became partially paralyzed in 1864 and died four years later at the home of his son, Basil, Jr., in Greenville. He was buried in the town's Greenwood Cemetery. A portrait of Manly hangs in the Amelia Gayle Gorgas Library at the University of Alabama, and another belongs to his great-grandson, Dr. Basil Manly IV of Greenville.