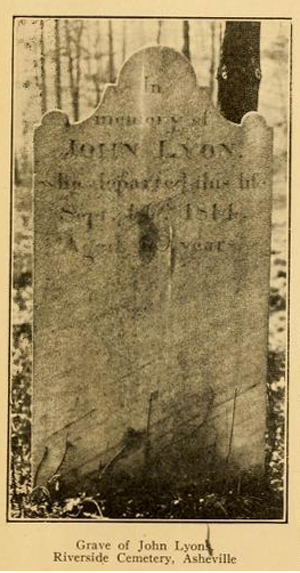 John Lyon, botanist and plant collector, was born in Gillogie in Forfarshire, a center of flax production in Scotland. Little is known about his early life or the circumstances that brought him to America. In 1796 he was working as a gardener in Philadelphia, where he met William Hamilton, a wealthy landed gentleman and art collector. Hamilton hired Lyon to manage the three-hundred-acre garden on his Woodlands estate on the Schuylkill River just outside Philadelphia. Under Lyon's care, the garden soon contained over ten thousand native and exotic plants, re-portedly "the finest collection in America in variety and beauty."

In 1799 Lyon went on a plant-collecting trip to the Allegheny Mountains of western Pennsylvania, the first of ten such trips he made throughout the Southeast over the next fifteen years. Though these excursions took him as far south as Florida and as far west as Nashville, Tenn., most of his traveling was centered in the southern Appalachians. Seven of his ten trips included exploration in western North Carolina, where he followed in the footsteps of earlier botanical explorers André Michaux and John Bartram. A journal he kept of his travels indicates that he collected plants on Roan, Grandfather, and Pilot mountains, among others, and that he stayed on several occasions with acquaintances in Asheville, Morganton, Lincolnton, and Salem. Lyon's journal is preserved in the library of the American Philosophical Society in Philadelphia; it was published in the society's journal, Transactions, in 1963. The only published works of Lyon himself were two catalogues circulated during trips he made to England in 1806 and 1812 which listed the American plants he brought with him to sell through both private transactions and public auctions.

A fellow botanist described Lyon as "a gentleman through whose industry and skill more new and rare American plants have lately been introduced into Europe than through any other channel whatever." He introduced thirty-one new varieties of plant life into horticulture, including one genus and at least three species that bear his name.

Late in the summer of 1814, Lyon contracted a "bilious fever" en route from Tennessee into North Carolina. He traveled as far as Asheville, where he spent his last weeks in bed at the Eagle Hotel under the care of a young friend, Silas McDowell, later a prominent Macon County leader who wrote a moving account of Lyon's death. He was buried in Asheville, though the site of his grave was disputed until the early 1960s, when it was found in the Riverside Cemetery. His gravestone, thought to be the oldest inscribed gravestone in western North Carolina, was sent from friends in Scotland. Now growing around his grave are plants named for or discovered by Lyon.

Joseph Ewan and Nesta Ewan, "John Lyon, Nurseryman and Plant Hunter, and His Journal, 1799–1814," Transactions of the American Philosophical Society (May 1963).