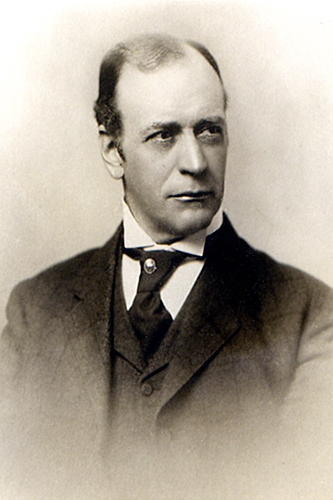 Forster Alexander Sondley, attorney and scholar, was born at Montrealla, his maternal grandfather's home in Alexander, a community ten miles north of Asheville. As an adult he most often referred to himself as F. A. Sondley; others, however, generally used Foster, as did Wofford College in Spartanburg, S.C., which he entered as a sophomore in 1873. He was the only child of Richard Sondley, of a prominent family of Columbia, S.C. His mother, Harriet Alexander Ray, had borne five children by a previous marriage before being widowed; Forster/Foster was her last child. Members of her family were pioneers in the region around Asheville where Sondley grew up. Educated in the various schools in and around Asheville, he was graduated from Wofford in 1876 and returned to Asheville to spend the rest of his life. He studied law and was admitted to the bar by the North Carolina Supreme Court in 1879; he also was licensed to practice before the U.S. Supreme Court.

His knowledge of North Carolina law, history, and geography, coupled with a characteristic courtesy in court towards legal opponents, earned him a reputation as the ablest civil lawyer in the western part of the state. In 1905, at the peak of his career, he went into semiretirement in order to devote more time to his varied interests, especially the study of history. By 1911 he had moved into Finis Viae, a palatial home on Haw Creek near Asheville, which he had built earlier. A collector of wide and varied tastes, he accumulated firearms, Indian relics, minerals, gemstones, antique furniture, porcelains, Confederate mementos, and other items. He is chiefly remembered for his personal library of approximately 30,000 volumes containing hundreds of rare works on southern and state history and on natural history. The city of Asheville acquired the library by bequest at his death, and parts of it still form the nucleus of the Sondley Reference Library in Asheville's Pack Memorial Library.

Deeply interested in the state's history, he was a member of the first North Carolina Historical Commission, established in 1903, and he fostered the organization of the Buncombe County Historical Society. His writings on state and local history were vigorous and accurate, and at his death he was a recognized authority on North Carolina history.

Sondley was an individual of retiring habits and a curious combination of characteristics. His writings betray a provincialism unusual in such a widely read man. An ardent Carolinian, a defender of the Confederacy, he yet showed a great tolerance towards controversial subjects and possessed a wide knowledge of the world. Strong of will and opinionated, he would also listen patiently in discussion or debate. Although reclusive by nature, he still had many friends, and his hospitality and generosity were well known in the region.

In appearance he was tall and erect, with a direct, piercing gaze. Portraits are located in the Buncombe County Courthouse and the Pack Memorial Library in Asheville. Never married, he died in his home near Asheville and was buried near his boyhood home in Alexander.

Among his more important published works are Asheville and Buncombe County (1922), History of Buncombe County, North Carolina, 2 vols., (1930), and My Ancestry (1930 [portrait]). Many of the rare books in his collection at the Pack Memorial Library were listed and described in Leaves from the Sondley, vols. 1–2 (1945–52).

Vertical files and Sondley Papers in the Asheville-Buncombe Library System.