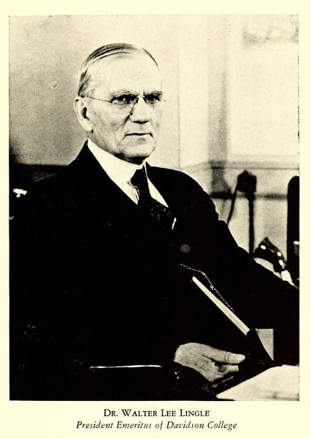 Walter Lee Lingle, Presbyterian clergyman and educator, was born in the Thyatira community of Rowan County, the son of Wilson Alexander and Martha Jane Lynch Lingle. He was graduated from Davidson College (A. B., 1892; M. A., 1893) and from Union Theological Seminary, then at Hampden-Sydney, Va., in 1896. At the seminary he was assistant instructor in Hebrew and Greek during his senior year and while pursuing graduate studies the following year. In the summer of 1896 he attended the University of Chicago.

Lingle was closely associated with four of the major institutions of the Presbyterian Church in the United States. In addition to his earlier teaching at Union Seminary, he was McCormick Professor of Hebrew in that school (1911–14) and occupied its chair of church history (1914–24). He served as president of the General Assembly's Training School (now the Presbyterian School of Christian Education) in Richmond from 1924 until 1929, when he became president of Davidson College. Here he remained until his retirement in 1941, at which time he was made president emeritus. He had previously officiated as president of the board of trustees of the college from 1906 until his assumption of the presidency. For fifteen years (1910–24), he was program chairman of the Montreat Summer Conference.

From 1913 to 1922 Lingle was editor in chief of the Union Seminary Review, and from 1923 to 1931 he was contributing editor of the Presbyterian of the South. In the latter year he began a series of popular articles for the Christian Observer, under the title of "Talks on Timely Topics," which ran for more than twenty-five years. He was the author of Presbyterians: Their History and Beliefs; The Bible and Social Problems, a volume incorporating the Sprunt Lectures that he had delivered at Union Seminary in 1929; Thyatira Presbyterian Church; and Memories of Davidson College.

On 2 Jan. 1900 he married Alice Merle Dupuy of Davidson, and they became the parents of four children: Louise Denton, Nan Russell, Walter Lee, Jr., and Caroline Dudley. Lingle died at Mooresville and was buried in the town cemetery at Davidson. There are portraits of him at the Presbyterian School of Christian Education in Richmond and at Davidson College. His personal papers are in the Historical Foundation at Montreat.