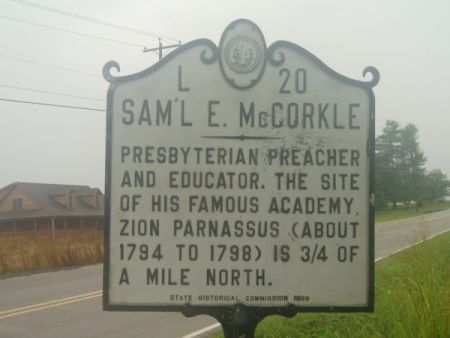 The Thyatira Presbyterian Church, located ten miles west of Salisbury, is believed to have been in existence since 1753 under various names, including Lower Meeting House and Cathey's Meeting House. The surrounding community in its early days was composed mainly of Scotch-Irish immigrants who settled first in Pennsylvania and then moved down to North Carolina. The community also had a small population of Pennsylvania Germans. Thyatira sided with the "old school" Presbyterians during the Great Awakening, disapproving of the exuberant actions exhibited by many during the worship services of the movement. This could be attributed to the community's staunch Scotch-Irish and German roots.

One of the church's most influential ministers, Samuel McCorkle, assumed his duties on 2 Aug. 1777. McCorkle, a native of the Thyatira community, believed that religion and education should be joined. To this end, he established Zion-Parnassus Academy, a classical school believed to have been the first normal school in America. This school became one of the finest in the state and produced many students who went on to be early graduates of the University of North Carolina in Chapel Hill-the establishment of which was championed by McCorkle, who became one of the school's original trustees.

This commitment to education can also be seen in how McCorkle ran Thyatira Church. McCorkle broke the church, both white and black communicants, into small groups, a rough equivalent to modern Sunday school programs, where the scriptures and catechism were taught. Thyatira served as a leader in education throughout the early days of North Carolina. Its effects can been seen not only in its support of the University of North Carolina, but in its role in the 1837 founding of Davidson College, a Presbyterian liberal arts school, as well.