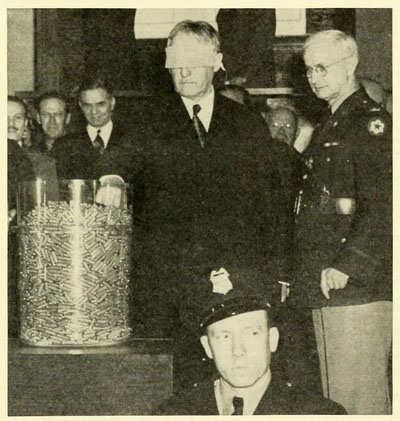 John Dallas Langston, lawyer, army officer, and federal administrator, was born in Beaufort County about three miles from Aurora. His father, George Mifflin Dallas Langston, was a Methodist minister who ran unsuccessfully for Congress on the Prohibition ticket in 1888. His mother, Sarah Anne Gibbs Langston, was a teacher before her marriage. John, who was originally named Jonathon but changed his name, was the youngest of seven children. He was graduated from Trinity College in Durham in 1903. While teaching school for two years after his graduation, he studied law under the direction of attorneys. During the summer of 1904 he attended The University of North Carolina Law School and was admitted to the bar the following year. He practiced law in Mount Olive from 1905 to 1910, when he joined Matt H. Allen, an attorney in Goldsboro, to form the partnership of Langston and Allen. In 1914 W. Frank Taylor joined the firm and it became Langston, Allen and Taylor; in time, when Langston retired, he and his son formed the firm Langston and Langston but the elder partner practiced little.

During World War I, Langston was commissioned major in the infantry and he served as a special aide to the governor in administering selective service in the state. Later he was transferred to Washington, D.C., where he served on the staff of Major General Enoch H. Crowder and became chief of the Classification Division of the provost marshal general's office. Eventually, he was assigned to the judge advocate general's office as chief of the Clemency Division. In 1919 he was promoted to lieutenant colonel.

After the war Langston returned to his law firm but remained active in the U.S. Army Reserve. For several years he also was president and publisher of the Goldsboro News.

Langston was an active Methodist and a Democrat. A member of the American Legion, he also belonged to a number of fraternal and civic organizations. A volume of poems by him, Life's Gleanings, was published in 1959. He married Mary (Mollie) Williamson of Mount Olive in 1903, and they were the parents of two sons and three daughters: John Dallas, Jr., William Dortch, Dorothy, Mary, and Carolyn. He died in Goldsboro and was buried in Willow Dale Cemetery.