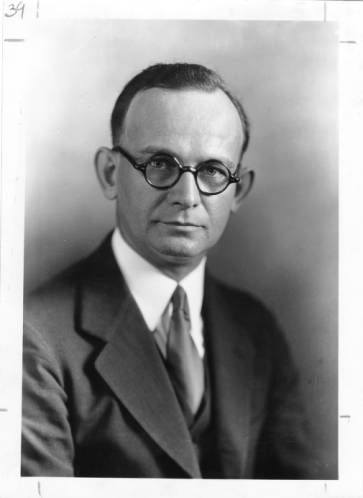 Edgar Wallace Knight, university professor and distinguished historian of American education, was born in Northampton County near the town of Woodland. His parents were John Washington and Margaret Davis Knight, small farmers whose chief crop was tobacco. Knight received his early education at the local schools and at Trinity Park, the preparatory school for Trinity College (now Duke University). He was graduated from Trinity College with a bachelor's degree and membership in Phi Beta Kappa in 1909, and with a master's degree in 1911. From Trinity he went directly to Teachers College, Columbia University, where he earned the Ph.D. degree in 1913.

Both at Trinity and Columbia, Knight studied under teachers who exerted a profound influence on his future. At Trinity professors Edwin Mims and John Spencer Bassett were his instructors and Dean Samuel Fox Mordecai of the law school was his warm friend. At Columbia, where he minored in history, he was a student of James Harvey Robinson and William A. Dunning, with the latter undoubtedly influencing his choice of dissertation topic; the study was completed under Professor Paul Monroe and published as a monograph entitled, The Influence of Reconstruction on Education in the South.

Knight's first experience in the classroom was at Trinity Park, where he taught English and history for two years while enrolled part-time as a graduate student at Trinity College. In the summer of 1910 he taught history at East Carolina Teachers Training School in Greenville. After graduation from Columbia, Knight returned to Trinity with an appointment as assistant professor of education; he was promoted to professor and remained in that position until 1917, when he became superintendent of Wake County Schools. In 1918, with the nation involved in World War I, he was appointed assistant educational director for the southeastern states of the Committee on Education and Special Training for the War Plans Division of the General Staff. In 1919 Knight joined the faculty of The University of North Carolina, and from that date Chapel Hill remained his home even though he held visiting professorships at a number of colleges and universities, including Darmouth, Columbia, Michigan, and Duke. In 1934 his reputation as a teacher and scholar was recognized by his appointment to one of the university's distinguished chairs, a Kenan professorship. Duke University, in 1952, conferred on him the degree, doctor of literature.

Knight was a magnificent teacher—unorthodox but inspiring, understanding and sympathetic, but demanding, and possessing little patience with careless or second-rate work from students or colleagues. In every respect he was a scholar; his enthusiasm for research in the history of American education seemed boundless, and to a remarkable degree he was able to transmit this to students, a fact that made his afternoon seminars particularly valuable. When a student's research efforts deserved recognition, Knight was quick to give praise and generous in giving credit when a reference was made to the student's work.

His research was directed chiefly towards the history of education in the antebellum South. He wrote extensively in that field, but in addition published numerous articles reflecting his awareness of the educational problems of the twentieth century. Throughout his career he was a critic of educational practices that he regarded as superficial, and in his writings treated them in a highly amusing fashion. Educational workshops, college and university administrators, enthusiasts for curriculum revision, and the proliferation of college degrees each were exposed to his sharp wit in books and articles such as "Consider the Deans, How They Toil," What College Presidents Say, "The Butter Curriculum," and "Getting Ahead by Degrees."

Friends and former students have fond memories of Knight's humor, for it was a quality very much a part of him. He was convinced that humor had a place in the classroom as well as in life, and he frequently used it to illustrate the weakness of an educational fad, to emphasize an important point, or to dispel Monday's gloom after the Saturday defeat of a Carolina football team. The humor was sudden and sometimes devastating, but never vengeful or designed to hurt. In the classroom there was almost an informal atmosphere, yet it was controlled informality that never degenerated into idle or pointless chatter as might have been the case under a less skillful person.

As a productive scholar Knight wrote more than 30 books and 150 articles, while also giving freely of himself to the university, to the community, and to the numerous agencies that called on him for advice. For twenty-eight years he was an active member of the Administrative Board of The University of North Carolina Graduate School, and served on numerous other university boards and committees. Within the state he was a member of the board of trustees of Louisburg College and of North Carolina College (now North Carolina Central University), a member of the state Library Commission and of the state Textbook Commission, assistant superintendent of Orange County Public Schools for several years (without pay), and for thirty years (1922–52) a member of the Chapel Hill School Board. The U.S. government on more than one occasion called on his services. At the beginning of World War II he was asked to become director of the qualifying tests for civilians in the Naval Training College Programs, and in the years immediately following he was active in the work of the Educational Policies Commission. During the years of military occupation in Germany and Japan, Knight resisted any invitations to participate in the educational programs. The lessons of Reconstruction were on his mind, and he quite frankly feared the errors that our government might again make.

In 1925, by virtue of a grant from the Social Science Research Council, Knight spent some time in Denmark observing the rural and folk schools. An account of this trip appeared in book form under the title, Among the Danes. During the academic year 1930–31 he was in China as a member of a special commission organized by the Institute of Social and Religious Research to study educational conditions in that country. In 1933, with his friends professors Paul Monroe and William C. Bagley of Teachers College, Columbia University, he went to Iraq, where the three worked as a commission to assist the government with its schools. And then Knight spent some time studying the educational systems of England and France. There was, indeed, nothing provincial about his scholarly interests.

Knight's monumental work was his Documentary History of Education in the South Before 1860, published in five volumes, the first of which appeared in 1949. Unfortunately, he did not live to see the final volume which was released from the press in December 1953, a few months after his death. The main body of his writings dealt with the history of education, and his most widely known work was the textbook, Education in the United States, which appeared first in 1929 and in revised editions in 1934, 1941, and 1951.

On 28 June 1916 Edgar Knight and Annie Mozelle Turner, a native of Orange County, were married in Durham Memorial Methodist Church. They were the parents of two daughters, Ann (Mrs. Strother Calloway Fleming, Jr.) and Jane (Mrs. James Minor Ludlow). Death came as the result of a heart attack, and he was buried in the Chapel Hill Cemetery.

Knight was intensely loyal to his state and to The University of North Carolina. As an individual, he was in every respect a gentleman; as a historian, he ranked with the best; and as a scholar, he retained a clear perspective. Knight was no reformer, but for forty years, in the midst of changing educational theories and philosophies, he spoke and wrote about the need for good teaching and sound learning. So far as he was concerned, there was no substitute; nor was there a substitute for excellence.