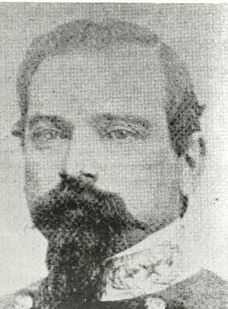 William Whedbee Kirkland, Confederate officer, businessman, and postal official, was born at Ayr Mount, the home of the Kirkland family east of Hillsborough. His father was John Umstead Kirkland, the son of Scottish merchant William Kirkland who came to the United States from Ayr, Scotland, and built Ayr Mount. His mother was Elizabeth A. Simpson Kirkland, the daughter of Samuel Simpson, a prominent merchant of New Bern. Young Kirkland was appointed to the U.S. Military Academy at West Point but did not graduate. In 1855 he was commissioned a second lieutenant in the U.S. Marine Corps, from which he resigned in August 1860.

When the Civil War broke out, Kirkland's name was sent to the Confederate Congress for appointment to the rank of captain in the Regular Confederate Army on 16 Mar. 1861. When the Twenty-first North Carolina Regiment was formed in June, he was elected its colonel. Kirkland established a vigorous regimen of discipline and drill. Soon the Twenty-first was sent to Virginia to join Beauregard's army along Bull Run, arriving on 18 July in time to participate in the engagement at Mitchell's Ford. During the first Battle of Bull Run, three days later, Kirkland was field officer of the day for General M. L. Bonham's brigade, to which his own regiment had been attached. His force helped guard the Confederate right flank and was not engaged in the more serious fighting on the left.

In October 1861 Kirkland's regiment became part of Brigadier General Isaac Trimble's brigade, of Ewell's division, and in early 1862 participated in General "Stonewall" Jackson's famous Valley campaign. On 25 May, when Trimble's brigade led the Confederate attack in the first Battle of Winchester, the Twenty-first North Carolina advanced through intense fire to drive the Union forces from behind a stone wall. In this charge Kirkland was seriously wounded in the thigh but refused to leave the field, waving his sword and cheering his men on. The injury kept him out of service for about a year, during which time he was able to perform minor duties as a temporary staff officer to General Patrick Cleburne in Tennessee.

Rejoining his regiment, he participated in the Gettysburg campaign. During the fighting at Gettysburg, Kirkland's regiment took part in the ill-fated charge on Cemetery Ridge on the evening of 2 July 1863. On 31 August Kirkland was promoted to brigadier general, to rank from 29 August (confirmed 16 Feb. 1864), and on 7 September was given command of Pettigrew's North Carolina brigade, which consisted of the Eleventh, Twenty-sixth, Forty-fourth, Forty-seventh, and Fifty-second regiments. On 14 October, in the unfortunate Battle of Bristoe Station, Kirkland's brigade—in conjunction with the North Carolina brigade of Brigadier General John R. Cooke—stumbled into a trap and was decimated. In a very short time the brigade lost 602 men and Kirkland was again seriously wounded. His actions in this battle were commended in the reports of generals Heth and A. P. Hill, division and corps commanders respectively.

After having been incapacitated for a number of months, Kirkland once again returned to duty and participated in the Battle of the Wilderness, on 5–6 May 1864, in which his brigade suffered severe losses. His command also fought in the Battle of Spotsylvania Court House on 8–21 May and in the actions along North Anna River and Totopotomoy Creek. On 2 June, during the Battle of Cold Harbor, he was again wounded by a sharpshooter. During his absence, his brigade passed to Brigadier General William MacRae. When Kirkland returned to the field in August, he was assigned to Martin's brigade of Hoke's division, consisting of the Seventeenth, Forty-second, and Sixty-sixth North Carolina regiments. Stationed north of the James River in the Richmond Defenses during the siege of Petersburg, the brigade took part in the battles around Fort Harrison. In the fall and winter of 1864, Kirkland's brigade remained on this front where it had the reputation for being one of the most disciplined brigades in the army. General Robert E. Lee ordered the defense lines strengthened and the camps policed during the winter and, on inspecting the lines, found that Kirkland's camp and defenses had the best appearance. Lee complimented him for this and summoned the other officers in the corps to observe Kirkland's camp and model their own after his.

In December 1864, Hoke's division was sent to Wilmington to aid in the defense of the Cape Fear River and Kirkland's brigade accompanied it back to its native state. Although Union naval and land forces under General Benjamin Butler were preparing to attack Fort Fisher, Kirkland was hurried forward to Sugar Loaf with the first two of his regiments to arrive from Virginia. When the Union forces landed on the beach on Christmas Day, Kirkland deployed his regiments as skirmishers covering the entire island and checked the Union advance, though outnumbered six times over. Butler abandoned his attack, but in January 1865 the Union forces tried again to capture the fort; this time they were able to land and establish a defense line before Hoke's division could stop them. Kirkland's skirmishers attacked and drove in Union skirmishers but then were ordered back. After the fall of Fort Fisher, Hoke's division retreated back to Wilmington and Kirkland's brigade formed the rear guard.

When Wilmington was abandoned, Kirkland's command held the bridge over the Northeast Branch of the Cape Fear while the rest of the division retreated across it. Moving then to Kinston, the brigade participated in Hoke's charge against Union forces left in the Battle of Wise's Forks on 8 Mar. 1865, which resulted in the capture of hundreds of Union prisoners. Two days later Kirkland's brigade was sent out on reconnaissance to determine the enemy's position, but somehow the order was interpreted as an attack. The brigade hurled itself against the Union entrenchments in a futile and costly assault. On 19–21 March Kirkland's forces took a conspicuous part in the Battle of Bentonville. It is said that during the fighting General Joseph Johnston, the Confederate Army commander, inquired as to who was responsible for the heavy firing at the front. When told the enemy was attacking, Johnston said, "I am glad of it. I would rather they would attack Kirkland than any one else."

At the end of the war, Kirkland was paroled at Greensboro on 1 May 1865. Afterwards he settled in Savannah, Ga., where for some years he engaged in the commission business. Later he moved to New York City and took a position in the post office. Invalided near the turn of the century, he spent his last years in a soldiers' home in Washington, D.C. He was buried in Elmwood Cemetery at Shepherdstown, W.Va.

Kirkland's wife was Susan A. Hardee, the niece of Lieutenant General William J. Hardee, of Georgia, eminent author of military tactics and prominent Confederate officer who led a corps in most of the engagements of the Army of Tennessee. Their marriage license is dated 16 Feb. 1859. Kirkland's daughter, Bess, became famous on the Broadway stage under the name Odette Tyler.