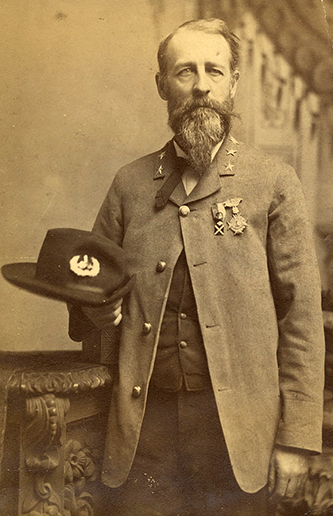 John Rogers Cooke, Confederate soldier, merchant, and civil administrator, was born at Jefferson Barracks, Mo. His father, Phillip St. George Cooke, then a first lieutenant in the First Dragoons, U.S. Army, was a native of Frederick County, Va. He was eventually to attain the rank of major general and retire from the army after fifty years of service. Young Cooke was educated at Harvard College as a civil engineer and in 1855 was commissioned directly into the U.S. Army as a second lieutenant serving in the Eighth Infantry. He saw service in Texas, New Mexico, and Arizona.

Upon the secession of Virginia from the Union at the outbreak of the Civil War in 1861, Cooke resigned his commission in the army and offered his services to General Theophilus Holmes, commander at Fredericksburg, Va., Cooke was accordingly made a first lieutenant. The horror of a family divided by a civil war was graphically illustrated with Cooke's family: he was in the Confederate Army; his father remained loyal to the Union and commanded cavalry in McClellan's Union army; one of Cooke's sisters, Flora, married James E. B. ("Jeb") Stuart, the famous Confederate cavalry leader, who was destined to fight against his father-in-law; another of Cooke's sisters, Maria, married a Confederate surgeon, Dr. Charles Brewer; and the third sister, Julia, married a Union general, Bvt. Brigadier General Jacob Sharpe.

Cooke raised a company of light artillery after the First Battle of Manassas and served with it along the Potomac. In February 1862 he was made a major and assigned to duty as chief of artillery of the Department of North Carolina under General Holmes. On 16 Apr., at the request of General Robert Ransom, Cooke was elected colonel of the Twenty-seventh North Carolina Regiment. He was to prove a most able commander and soon grew to be quite popular with his men, who found him firm in the enforcement of orders but not a martinet. A kind man, he looked after his troops, and they in turn responded with affection and a willingness to follow in battle equaled by few other regiments.

In the spring of 1862, McClellan's Union Army was advancing on Richmond, Va., in the Peninsula campaign, and Holmes's command was called to Virginia to help meet it. Cooke and the Twenty-seventh North Carolina Regiment accompanied Holmes there as a part of William Walker's brigade. During the great Seven Day's battles in front of Richmond (26 June–2 July 1862), Cooke's regiment was unengaged. It spent the remainder of the summer around Petersburg, seeing no action other than harassment of Union shipping in the James River. In September 1862, Cooke and the Twenty-seventh, now a part of a two-brigade division commanded by Walker, accompanied Lee's army northward into Maryland on the first invasion of the North. In the attack on Harper's Ferry, W. Va., Cooke's regiment participated in seizing Loudon Heights. When the town fell on 15 Sept., Walker's division hurried to join the rest of Lee's army at Sharpsburg, Md., on the bank of Antietam Creek.

During the battle of Sharpsburg, or Antietam, 17 Sept. 1862, Cooke commanded his regiment and the Third Arkansas in filling a crucial gap. General James Longstreet, commanding that part of the field, sent repeated messages to Cooke to hold his position at all costs, because it was the "key to the whole line." Though his ranks had heavy losses and were entirely without ammunition, Cooke did just that. For two and a half hours the men remained in their position without a cartridge, until the Union advance lost momentum and ceased. The stand made by Cooke's two resolute regiments held Lee's center together and saved the day, though it cost the Twenty-seventh North Carolina alone some 203 of its 325 men. Generals Jackson, Walker, Longstreet, and Lee all mentioned Cooke in their reports of the battle; he won the admiration of the entire army and earned a reputation as a hard fighter.

When the army returned to Virginia, Cooke, though he was junior colonel of his brigade, was appointed brigadier general on 1 Nov. 1862, to rank from the same date. His appointment was confirmed 22 Apr. 1863, and he was given command of a newly created brigade of North Carolina troops consisting of his own former regiment and the former Fifteenth, Forty-sixth, Forty-eight, and Forty-ninth regiments. This brigade was a part of Ransom's (formerly Walker's) division. Not long afterward, Cooke got a chance to lead his new command in the Battle of Fredericksburg, Va., 13 Dec. 1862. There he was seriously wounded, but his brigade did admirable service throughout the battle.

In January 1863 the brigade was transferred to South Carolina, and Cooke resumed command in February. The brigade remained in South Carolina until 26 Apr. 1863, when it was sent to North Carolina and aided in repelling Union forces following the Battle of Gum Swamp near Kinston. Early in June, Cooke's brigade was rushed to Richmond to join Lee's army once again, as a part of Henry Heth's division, for the Gettysburg campaign. At Richmond, however, the brigade was detained; Cooke and his men spent the summer there and around Fredericksburg, moving from place to place to repel threatening Union advances. In October it was finally assigned to Heth's division and participated in the pursuit of the Union Army from near Culpeper Court House. At Bristoe Station, over Cooke's protest, a hopeless attack was ordered. Cooke lost about 700 of his 1400 men in about thirty minutes of fighting and was himself severely wounded. He did not return to duty until the middle of April 1864.

Cooke led his brigade in the Wilderness campaign and was engaged in heavy fighting on the afternoon of 5 May 1864 (the first day of the Battle of the Wilderness), at the intersection of the Orange Plank Road. During the course of the afternoon's fighting, the brigade lost 1080 of its 1800 men but took a conspicuous part in the battle. From this day until the summer, it was almost constantly engaged; Cooke himself was again wounded.

During the early part of the siege of Petersburg, Cooke's brigade served in the trenches around the city. On 25 Aug. 1864 it took a conspicuous part in the Battle of Reams' Station on the Weldon Railroad, south of Petersburg. Lee himself highly complimented the efforts of Cooke and his men in this battle. During the fall of 1864 and the winter of 1864–65, the brigade took part in the operations of the right flank of Lee's army, southwest of Petersburg. On 25 Mar. 1865, Cooke was put in charge of two brigades of Heth's division to act as a support for General James B. Gordon's attack on Fort Stedman. The attack failed, however, and Cooke's two brigades were not used. In the days following this action, Cooke and his own men were engaged in the fighting on the extreme right of the Confederate line, beyond Hatcher's Run southwest of Petersburg. When at last, on 2 Apr. 1865, Union forces broke through Lee's lines around Petersburg, Cooke found himself senior officer in command of four small brigades cut off from the rest of the army by the Union attacks. This little command was overpowered at Sutherland's Station, west of Petersburg, by pursuing Union forces, but part of it escaped to rejoin the rest of Lee's army in its retreat to Appomattox. Cooke led his brigade in the retreat and on 9 Apr. 1865 surrendered his 560 officers and men, the largest brigade in Heth's division, along with the rest of the army.

Cooke's leadership throughout the war was sound. He was popular with and respected by his men and his superiors alike. In 1864, Colonel R. H. Chilton, Lee's chief of staff, transmitted to Cooke a letter in which Lee praised Cooke as the finest of his brigadier generals and his brigade as the finest of the army. Wounded a total of seven times during the war, Cooke missed promotion to the rank of major general only by the ending of the war.

After the war, Cooke entered the mercantile business in Richmond, Va., and later became prominent in the affairs of city and state. He served for several years as a member of the city committee of the Democratic party. He was also the director of the Chamber of Commerce and president of the board of directors of the state penitentiary. One of the founders of the Confederate Soldiers' Home in Richmond, he also served as manager. He was one of the first Confederate commanders of the Lee Camp, United Confederate Veterans, and acted as chief of staff at the laying of the cornerstone of the Lee Monument in Richmond.

Cooke was married to Nannie G. Patton, of Fredericksburg, Va., daughter of Dr. William F. Patton, surgeon, U.S.N. The couple had eight children. Cooke died in Richmond and was buried at Hollywood Cemetery.