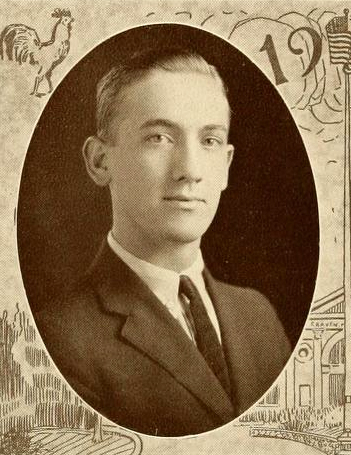 Charles Edward Jordan, university administrator, was born at , the son of the Reverend H. H. and Annie Sellers Jordan. His father, a longtime and distinguished member of the Methodist Episcopal Church, South, was a native of Iredell County; his mother was a native of Randolph County. One of five children, Jordan had one sister, Mrs. Henry C. Sprinkle of Mocksville, and three brothers, all of whom were prominent in the state: B. Everett, of Saxapahaw, was a textile manufacturer and served for many years in the U.S. Senate; Henry was appointed chairman of the North Carolina Highway Commission by Governor W. Kerr Scott; and Frank was a clergyman in the Methodist church.

Charles E. Jordan entered Trinity College (now Duke University) in the fall of 1919 and was graduated with a bachelor of arts degree in 1923. He spent the next two years in Trinity's law school where he received a bachelor of laws degree in 1925. Although he passed the state bar examination and was licensed (1926) to practice in North Carolina, he undertook a career in educational administration. Jordan became assistant secretary of Duke University in 1925 and was promoted to secretary in 1941, serving in that capacity through 1957. He was vice-president in the Division of Public Relations (1946–66) and chairman of the university's Athletic Council (1949–63). Elon College awarded him the honorary doctor of laws degree at its commencement in June 1945. 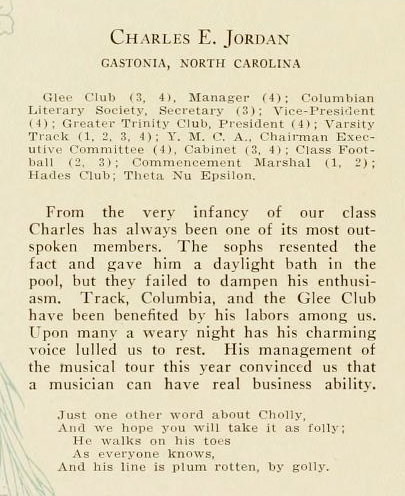 For forty-seven years—from his student days until his retirement in 1966 because of deteriorating health—Jordan had a single objective to serve Duke University. He was a vital part of its stabilization and growth, projecting an image of scholarship and service to thousands of students who attended Duke during his tenure.

In a variety of affiliations, Jordan also served his community and state. While he was a member and chairman (1949–57) of the Durham County Board of Education, three bond issues for support of the schools were authorized by a popular vote and all county schools received full accreditation by the Southern Association of Colleges and Secondary Schools. He resigned the chairmanship in 1957 to accept appointment to the state Board of Education. Jordan was also president of the North Carolina State School Boards Association from 1953 to 1956. The new junior-senior high school built in southern Durham County was named for him in 1963.

From 1947 to 1949 Jordan was chairman of the Institutional Advisory Committee of the Veterans Administration Agency of the federal government. In addition, he was president of the North Carolina Symphony Society (1949–52), a member of the North Carolina Library Association (1955–57), and president of the Atlantic Coast Conference for intercollegiate athletics (1955–56). He was a member of the Rotary Club of Durham (president, 1940–41), Durham Chamber of Commerce (director, 1947–48), and Durham YMCA (director for more than a decade). His business connections included membership on the board of directors of the Home Savings and Loan Association (from 1936); Wachovia Bank, Durham (from 1949); and Occidental Life Insurance Company (from 1949).

On 12 December 1932 Jordan married Elizabeth Tyree of Durham, and they had two children: Charles Edward, Jr., and Elizabeth (Mrs. William B. Mewborne, Jr.). He died at his home in Durham at age seventy-two and was buried in Maplewood Cemetery.