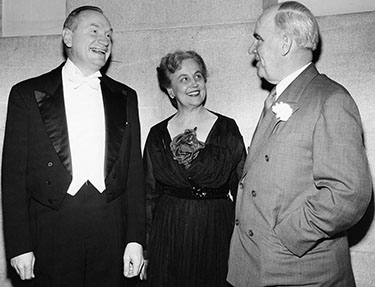 The North Carolina Symphony had its origins in Chapel Hill as a work relief project as part of President Franklin D. Roosevelt's New Deal agencies in 1932. The first conductor was Lamar Stringfield, who directed the orchestra from 1932 to 1938. Benjamin Swalin became the director in 1939, and under his leadership the North Carolina Symphony became the first symphony to receive state aid. The "horn-tooter" bill passed by the General Assembly in 1943 provided $2,000 for each year of the 1943-45 biennium. From the beginning, the orchestra had an active, supportive Symphony Society and strong business leadership. Martha Maxine Swalin also was a partner in building the symphony.

The North Carolina Symphony's mission has always been to be a "people's orchestra" and to take its music to the masses. Its music education program has been shared by more than 3 million people since 1945, when the children's concert division of the North Carolina Symphony was organized by Ben and Maxine Swalin and director of education Adeline McCall. The symphony still performs about 55 music education programs a year in 30 to 40 communities across the state. Students in the fourth, fifth, and sixth grades attend these concerts. Three generations of North Carolinians have shared the experience of seeing and hearing the symphony when they were children.

Today, the North Carolina Symphony is a fully professional orchestra with 65 members, playing in Meymandi Concert Hall in Raleigh's Memorial Auditorium. It performs for 100,000 children and more than 275,000 adults a year. In addition to traditional classical concerts, the symphony has a pops series of lighter music, a ballet series, and a Saturday morning young people's series. The orchestra has been able to attract world-renowned guest artists such as pianist André Watts for its classical series and singer Mel Tormé for its pops series.

The symphony's annual budget of more than $8.5 million comes from a grant-in-aid from the North Carolina General Assembly and the North Carolina Department of Cultural Resources and from ticket sales, contract sales, individual contributions, corporate sponsorships, and grants from Cary, Raleigh, Wake County, and the National Endowment for the Arts. There are more than 20 endowed chairs and more than 25 endowed Special Funds.

"An Act to Place the North Carolina Symphony Society, Incorporated, Under the Patronage and Control of the State, and to Authorize the Governor and Council of State to Make an Allotment from the Contingency and Emergency Fund in Aid Thereof." 1943 Session laws and resolutions passed by the General Assembly at its Regular Session. Charlotte [N.C.]: Observer Printing House. 1943. p.892-893. http://digital.ncdcr.gov/u?/p249901coll22,248835 (accessed October 24, 2012).