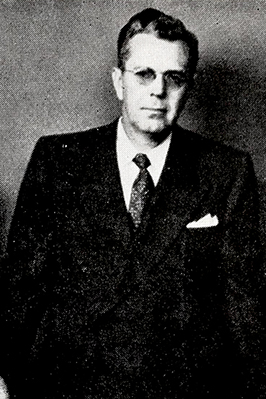 Amos Neill Johnson, physician, was born in Garland, Sampson County, the son of Jeff. Deems, Sr., and Mary Lily Wright Johnson. After attending the elementary school in Garland, he became a student at the Blue Ridge School for Boys, Hendersonville, from which he was graduated in 1925. He received the bachelor of arts degree from Duke University in 1929. At Duke, the popular and scholarly Johnson was active in many campus organizations; in his senior year he was president of the student body. He also was a member of the football and baseball teams, and during the summers played baseball for the old Virginia, Piedmont, and Coastal Plain leagues.

In the fall of 1929 Johnson enrolled in the then two-year School of Medicine of The University of North Carolina, from which he received a certificate in medicine. Continuing his studies at the University of Pennsylvania School of Medicine at Philadelphia, he was graduated with the degree of doctor of medicine. Commenting on his desire to become a physician from an early age, Johnson joked that he was motivated by a determination to avoid farm work: "I had plenty of that as a boy."

After serving his internship at the Jackson Memorial Hospital in Miami, Fla., Johnson returned to Garland where he spent the rest of his life in general practice. Recognized throughout the area for his professional ability, he served on the staffs of the Sampson County Memorial Hospital and the Bladen County Memorial Hospital, Blandenboro. During the same period he was an instructor in general practice in the Duke University School of Medicine, Durham. For twelve years he participated in Duke's preceptorship program, which meant having a medical student constantly at his side for two-week intervals.

In addition to his busy practice, Johnson was active in local, state, and national medical associations as well as certain specialty organizations. For six years he was a member of the North Carolina Board of Medical Examiners (president, 1955). As president of the North Carolina Medical Society (1960–61), he sought to develop plans for prepaid medical care insurance in all brackets, especially for indigents. He was also president of the Sampson County Medical Society and of the Third District of the state medical society.

A charter member of the North Carolina chapter of the American Academy of Family Physicians, Johnson served as president and as chairman of its Committee on Education. In the national organization, he was for a time an official delegate from North Carolina and served successively as chairman of the Scientific Assembly and of the Commission on Education, chairman of the board of directors, president-elect, and president. From 1965 he represented the academy in the U.S. Congress, traveling regularly to Washington, D.C.—often one day a week—to appear before congressional committees, serve on panels, and consult with national leaders in both the executive and legislative branches of government. As a longtime member of the American Medical Association he was a perennial delegate from North Carolina, served as commissioner of the Joint Commission on Accreditation of Hospitals, and was a member of the ad hoc Committee to Study Training for Family Practice.

The American Board of Family Practice was a product of Johnson's interest and emphasis. He served as treasurer and president, and as its Washington consultant was the liaison officer between the medical profession and the government. Further, he was a member of the Executive Committee of the American Board of Medical Specialists and a director of the Universal Education Corporation.

In the closing year of Dan K. Moore's administration, Johnson was cited by the governor as "Citizen of the Year." He was so honored again in 1975—one of the few to be given that award twice. In the latter year he was also named (posthumously) for the John G. Walsh Award, the highest honor accorded by the American Academy of Family Physicians; earlier he had received the academy's Certificate for Meritorious Service. The University of North Carolina Medical School gave him its Distinguished Alumnus Award in recognition of his leadership and contributions in the field of medicine, especially family practice.

His fellow practitioners remember Johnson for his pioneer plan called "the Physicians' Assistant Program." He had employed such a full-time assistant in his office for many years, and he later developed a physicians' assistant course, now available at the Duke University School of Medicine. On numerous occasions Johnson was called upon for professional testimony before state and national groups concerning ways and means of advancing health care for rural residents. He was a delegate to the White House Conference on the Aged and participated in subsequent conferences of a national scope, including the Surgeon General's Conference on the Prevention of Disability from Arthritis and the later White House Conference on Health. In addition, he was medical adviser to the Department of Health, Education, and Welfare (on cancer control), and to the U.S. Public Health Service (on the department's total health services and as a member of its Medical Assistance Committee).

Few North Carolina physicians in this century have received the professional and personal esteem granted Johnson. Immediately after his death, the Tar Heel Practitioner, the official publication of the North Carolina Academy of Family Physicians, devoted an entire issue in his memory. Political leaders, educators, and professional colleagues wrote of his tireless dedication to the major emphasis of his life: the vitalization and recognition of family practice as a basic component of medical care. The various sketches detail his multiple services in public offices, and especially recount his conspicuous leadership in national political affairs. It was reported that he wrote many memoranda, and perhaps some speeches, for congressional leaders—among them Senator Edward Kennedy, Congressman Paul Rodgers, and John Henley. Consulted by presidents and governors, he became known as an "astute medical politician." He was the author of the Family Practice Act of 1969, which passed the Congress with only one dissenting vote but later was vetoed by President Lyndon B. Johnson. When its advocates took the matter to court, the Federal Court of Appeals in Washington, D.C., ruled that the president was wrong in rejecting the bill. Amos Johnson guided the appeal, having been the first to question the propriety of the pocket veto.

On 16 Mar. 1934 Johnson married Mary Porter Allan, the daughter of Clifford Hollingsworth and Nan Martin Allan, of Fort Lauderdale, Fla. Of his wife, Johnson said: "She's worked as hard . . . as I have. She has always been my lab technician and secretary. She also handles all my financial affairs." The couple had two children: Mary Allan (Mrs. William R. Watts III) and Amos Neill, Jr. Johnson died in Bladen County. Funeral services were conducted at the Graves Memorial Presbyterian Church, Clinton, of which he was a member, and burial followed in the Clinton Cemetery.