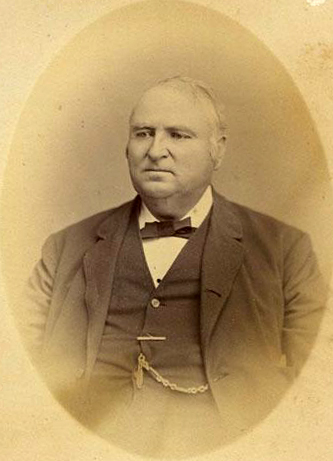 David Aaron Jenkins, state treasurer of North Carolina and member of the General Assembly, was born in Lincoln (now Gaston) County of Welsh parentage. He was the son of Aaron and Mary Jenkins. His mother was the daughter of Joseph Jenkins, who is reported to have been a fifer in a company of American Revolutionary soldiers, and the granddaughter of Lieutenant Colonel Frederick Hambright, who commanded an American regiment at the Battle of Kings Mountain.

Although his formal education was limited to the old field schools, Jenkins, according to one source, started teaching at age fourteen. Subsequently, he chopped and sold wood to the Fullenwider furnace, receiving in return manufactured goods that he sold for profit. He also did farm work and split rails. His first real financial opportunity came when he was entrusted with the collection of accounts for three major principals, one of whom, Jesse Holland, later became his father-in-law. Jenkins was elected, first, to the office of constable and, later, to the office of magistrate, serving in the latter capacity for many years. When the Civil War was imminent, he was unquestionably loyal to the South, but he foresaw the inexpediency of secession and was opposed to it. During the conflict he was, as a magistrate, exempt from active field duty. After the war, he became identified with the Republican party, holding the view that the interests of the people could best be served by their taking an active part in politics and seeking, by their influence, to temper and restrain the excesses of those in power.

In 1866, supported by both Democrats and Republicans, Jenkins was elected to the General Assembly and served two years. In 1868, he was the Republican nominee for state treasurer and won the election. On assuming office, he employed as his adviser Kemp P. Battle, who had been the Democratic incumbent and his opponent, reflecting his astuteness and recognition of capability. He also retained Donald Bain, another Democrat, as chief clerk. He was reelected in 1872, serving two four-year terms.

Jenkins's record as state treasurer, in a stormy period of reputed spoils in government, was notable for his personal integrity. However, historian J. G. de Roulhac Hamilton advances this opinion: "D. A. Jenkins seems to have been personally honest so far as the funds in his hands were concerned, but like all in his administration, he was perfectly aware of the wholesale stealing that was going on." A further statement by the same author hints of nepotism: "Jenkins had his son in office." Nonetheless, his personal honesty was widely acclaimed among his contemporaries and earned him the sobriquet, "Honest Dave Jenkins." In 1880 friends urged him to seek the Republican nomination for governor but he declined to do so, and in 1881 he supported the Prohibition party.

Jenkins was a member of the Baptist church. On 20 May 1841, he married Lodema Holland (b. 22 Apr. 1820), the daughter of Jesse and Martha Jane Hanks Holland. They had ten children: Mary A., Elmina B., Aaron D., William W., Martha J., James C., Benjamin, David H., John F., and Laban L. Jenkins died at age sixty-four and was buried beside his wife in the family burial ground near their home in eastern Gastonia. Portraits of him and of his wife are in the possession of his great-grandsons, James Copeland Craig of Charlotte and Dr. Samuel Austell Wilkins, Jr., of Atlanta; the two portraits are combined and reproduced in Hoffman's Our Kin.