Michael Holt, Jr., blacksmith and farmer who became a Patriot during the American Revolution, was born in Virginia, the son of Michael Holt, Sr., and his wife Elizabeth, whose maiden name is unknown. Other children born to this couple included William, Peter, and John. About 1740, the family moved to North Carolina and settled on land in present Alamance County. 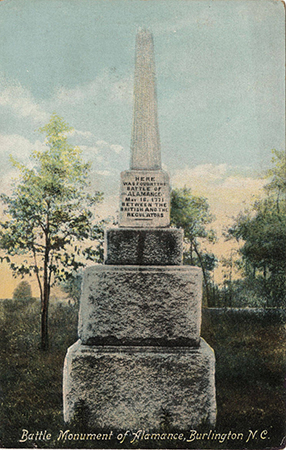 When grown, the younger Michael obtained his own land by a grant of 150 acres on Little Alamance Creek from Earl Granville's agents. By the practice of his trade and shrewd management, he added to this acreage throughout his life. Holt was appointed one of the justices of Orange County (from which Alamance was later formed) and was a captain in the provincial militia. In 1768, when the Regulators became troublesome to royal governor William Tryon, Holt was ordered to muster out his company and join the militia to maintain order. On his arrival in Orange County to head this force, Tryon set up his headquarters on Holt's farm. When no fighting occurred, Tryon concluded that the agitation had permanently subsided and returned to New Bern. His assumption was incorrect, however, as the following year the Regulators became violent. Holt was one of several local officials "severely whiped" during the rioting in Hillsborough. The governor returned to Orange and Captain Holt again led his company to join the militia in ending the insurrection. After subsequent attempts to negotiate a settlement failed, the War of the Regulation ended with the Battle of Alamance, fought 16 May 1771, ironically on Holt's own farmland. After the confict the sick and wounded were sent to the Holt home for medical attention and nursing. The outcome of the war was retribution for the captain in view of the indignities he had suffered at the hands of the rioters, and he continued to be a loyal subject of the Crown.

When the American Revolution began, Holt was among the militia officers authorized by Tryon's successor, Governor Josiah Martin, to raise companies of fifty men "to resist and oppose" the Patriots. He dutifully recruited his company and led it to join the Scottish Highlander Tories and other Loyalists rallying under General Donald McDonald at Cross Creek (now Fayetteville). En route to the rendezvous, "when he was fully acquainted with the intention of the Tories," he changed his mind and returned home, "inducing a Number of Others to follow his example without a junction with the Scotch Army." Holt then became a Patriot and remained one. Nevertheless, he was arrested as a Tory and sent to prison in Philadelphia. From his confinement there, he explained his change of attitude in a petition addressed to the North Carolina Council of Safety. This was supplemented by a similar petition from the Orange County Committee of Safety. As a result, the Council decided "Michael Holt would not in any wise injure the Caus of liberty in this State," and, upon its recommendation, the Continental Congress pardoned the prisoner.

Holt then returned to his farm and lived peaceably for the rest of his life. Shortly after the Revolution, an English author touring the United States was entertained at the Holt home "with great hospitality." The visitor described his host as a magistrate possessed of a "considerable property" and "the son of Dutch or German parents, for he himself was born in America." Holt was a sensible man of sound judgment, "but without the least improvement from education, or the embellishment of any kind of polish, even in his exterior." The farmer has also been described as five feet ten inches tall and weighing approximately 225 pounds, with a complexion so dark he was known locally as "Black Michael."

He married Margaret O'Neill, and they were the parents of Joseph, Margaret, and Elizabeth. After his first wife's death, Holt married Jean Lockhart in 1767, and their children were Sarah, Joshua, Isaac, Mary, Catherine, Michael III, and William. The blacksmith was buried in a private cemetery on his farm, which also contains the graves of several members of his family, including that of his son-in-law, John Harden, husband of Sarah Holt, who was a captain in the American Revolution. This burial ground, still intact, is located on the west side of the Hanford Brick Yard Road, a few miles southeast of Burlington. On Holt's tombstone is the epitaph often quoted but seldom actually seen:

Remember, man as you pass by,
As you are now, so once was I;
As I am now so must you be,
Prepare for death and follow me.

Holt's children inherited his considerable estate and used it with such success that a substantial part of the patrimony remained in the possession of his descendants for three generations.