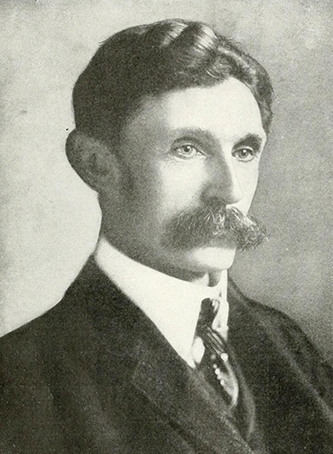 Joseph Austin Holmes, geologist, mining engineer, and conservationist, was born in Laurens, S.C., of English and Scotch-Irish ancestry, a descendant of William Holmes (1592–1678) of Marshfield, Plymouth, Mass. His parents were Nancy Catherine Nickels and Zelotes Lee Holmes, a Presbyterian minister and teacher with a strong scientific interest. His uncle, Joseph E. Holmes, represented the American machinery exhibitors at the London Crystal Palace Exposition.

After receiving his early education at Laurens Academy and the Holmes Academy, Holmes worked his way through Cornell University, graduating in 1881 with a B.S. degree in agriculture. Appointed professor of geology and natural history at The University of North Carolina in 1881, he headed that department until 1891 and lectured there until 1903.

Exceptional knowledge of North Carolina's economy and resources earned Holmes an appointment as state geologist to head the new Geological Survey, created to study the state's resources and encourage economic development. He brought to this task the qualities that typified his life: ability, dedication, and energy. Sometimes working from 9:00 A.M. until 2:00 A.M., Holmes used the survey to greatly benefit the state's economy and to make North Carolina the premier state in southern conservation. Under his direction a systematic study of the state's resources began; the resulting knowledge and publicity of mineral, timber, fish, wildlife, and water resources led to important economic investment and development. Holmes aimed to conserve as well as develop, and much of the survey's work stimulated long-range planning and less wasteful practices. He initiated studies of reforestation and turpentining methods to better utilize and protect timber resources. Additional studies sought a similar goal for North Carolina's other resources. Though handicapped by limited funds, his efforts demonstrated the value of study and planning in resource protection and use. Among the first to urge that a federal forest reserve be established in the South Appalachians, Holmes supported the movement for establishing eastern forest reserves and facilitated passage of the Weeks Act by accumulating evidence of deforestation's adverse impact on the mountain slopes.

While residing in North Carolina Holmes became well known for his efforts to improve state roads, organizing and leading the North Carolina Good Roads Association. His advocacy of increased state funding and the use of county convicts on road work resulted in a large increase in the construction of macadam roads. He assisted similar efforts in other states and was adviser to the U.S. Department of Agriculture for southern roads.

In 1903 Holmes was appointed director of the department of mines and metallurgy at the St. Louis World's Fair. His success in this enterprise led to decorations by several foreign governments and his appointment to a congressionally authorized committee investigating the more efficient use of American fuels and structural materials. In 1905, he was placed in charge of the fuel investigations and resigned as North Carolina state geologist. Soon appointed chief of the technological branch of the U.S. Geological Survey, Holmes achieved its reorganization as the U.S. Bureau of Mines in 1910. President William Howard Taft appointed Holmes director of the new bureau although he was identified with those who opposed Secretary of the Interior Richard A. Ballinger.

At the federal level, Holmes concentrated on reducing waste in the use of mineral resources and on lowering the appalling accident rate in U.S. mines. Studies by him or under his direction resulted in great savings in the mining and metals industries, including improvements in radium extraction and coking coal. He is best known for his efforts to reduce mining accidents and to improve rescue and emergency procedures, adopting and making famous the slogan "Safety First" for the Bureau of Mines. He disproved the established theory that coal dust would not explode unless in the presence of gas, thus revealing the true hazard of coal dust to mine safety. He sponsored a national mine safety meeting in 1911 with beneficial results—the increased availability of trained rescue and first-aid personnel, and of modern safety and rescue devices such as oxygen breathing apparatus. He also traveled abroad on several occasions to study mining techniques and invited foreign experts to the United States to suggest improvements.

Well-liked and respected by his colleagues, Holmes was noted for unselfishness. He sometimes used his own money to complete projects in North Carolina and once reduced his salary to increase an assistant's. North Carolina State Geologist Joseph Hyde Pratt described him as "a splendid representative of the Southern Christian gentleman."

On 20 Oct. 1887, Holmes married Jane Isabella Sprunt of Wilmington, N.C. They had four children: Jean Dalziel, Joseph Austin, Jr., James Sprunt, and Margaret Catherine. A Presbyterian and a Democrat, Holmes was not politically active except in lobbying for state funding and for the creation of the Bureau of Mines. The author of seventy-five articles, he directed work described in many more publications by state and federal agencies.

Holmes died in Denver, Colo., of tuberculosis and was buried in Rock Creek Cemetery, Washington, D.C. His death was hastened by overwork, by site inspections of mine disasters, and by an arduous trip to investigate Alaska coal fields in 1913. After his death, the Joseph A. Holmes Chair of Safety and Efficiency Engineering was created at the Colorado School of Mines and the Joseph A. Holmes Safety Administration was formed by the Bureau of Mines.

Holmes, Joseph Austin. Report on Coal in Alaska for Use in United States Navy. Washington [D.C]: Committee on Naval Affairs. 1914. https://archive.org/details/reportoncoalina00holmgoog (accessed May 1, 2014).

Joseph Austin Holmes. The Sampling of Coal in the Mine. Washington [D.C]: Government Printing Office. 1918. https://archive.org/details/samplingcoalinm00holmgoog (accessed May 1, 2014).