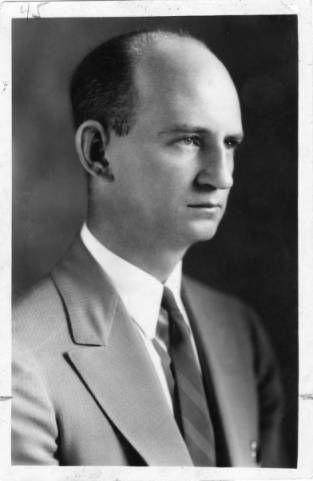 Samuel Huntington Hobbs, Jr., rural sociologist, was born on a family farm near Clinton, the first son and second child of seven children of Samuel Huntington and Mary Broddy Hobbs. His father, a leading Sampson County farmer, was active in the North Carolina Cotton Growers Association and the National Farmers Union, and served from 1929 to 1931 as the county's Democratic representative in the state senate. On the farm where he grew up and helped his father with the chores, Hobbs received practical lessons in rural social economics. Hobbs's father also played an important role in his son's formal education. For two years, Hobbs attended classes in a school his father had established on the family farm. Later, he was a student at the newly formed public schools, which offered instruction only through the tenth grade. In 1913, after a year at Elon College, Hobbs entered The University of North Carolina where he received a B.A. degree in 1916.

Although Hobbs had majored in geology, E. C. Branson, head of the Department of Rural Social Economics, offered him a job as instructor. Hobbs accepted the position and completed his master's thesis, "Gaston County: Economic and Social," the following year. Except for two years in the navy during World War I and a year at the University of Wisconsin to complete his doctoral degree (1928), Hobbs never left The University of North Carolina, where he taught for fifty-two years.

Not long after Hobbs joined the department, Branson began referring to him as "my right hand man." Branson also likened their relationship to that of a father and son. Hobbs later named one of his sons after Branson. Hobbs was Branson's choice to succeed him as head of the department, a position Hobbs held from 1933 to 1939, when the department was merged with the Department of Sociology. His teaching, writing, editing, and public service activities all reflected the influence of his mentor and friend.

The work of Branson and Hobbs was a significant part of the university's effort to aid the people of North Carolina by improving economic and social conditions in the state. This idea of service to the state led to the university's designation, "the Wisconsin of the South." While completing his graduate studies at the University of Wisconsin, Hobbs had an opportunity to see how the university that pioneered in service to the state worked. Under his direction, the Department of Rural Social Economics at Chapel Hill continued to develop a library of information about the state and region, to conduct state and regional studies, and to answer calls for information from citizens and state institutions.

Many of the courses Hobbs taught—on such topics as the rural community, cooperation in agriculture, and North Carolina land economics—had few precedents. He developed them on his own, before there were any relevant textbooks. The development of these courses and Hobbs's research and writing activities were closely related. Material gathered by him, or under his direction, became the basis for courses, articles, and books.

Through the pages of The University of North Carolina Newsletter, Hobbs and his contributors made the entire state their classroom. They provided information about social and economic developments and needs to newspaper editors, officeholders, and concerned citizens throughout the state. In addition to editing the Newsletter from 1922 to 1956, Hobbs wrote scores of articles for the paper. The Newsletter was widely appreciated as an influential promoter of public welfare in North Carolina.

Hobbs also encouraged and guided the work of the North Carolina Club and the various county clubs organized by faculty members and students. The North Carolina Club each year focused on a specific problem confronting the state and published its findings in the North Carolina Yearbook. County clubs worked in a similar manner. Hobbs helped facilitate the work of the clubs and often edited their publications. In addition to shedding new light on specific concerns, he aimed to develop informed and concerned citizens who would be prepared to address the needs of their counties and state.

State officials drew not only on the information Hobbs had accumulated, but also on Hobbs himself. A walking library of facts about North Carolina and the South, he served on countless committees and planning boards such as the North Carolina Farm Tenancy Commission, North Carolina Rural Electrification Authority, North Carolina Rural Telephone Authority, Medical Care Commission, and Chapel Hill Planning Authority. He helped shape state legislation creating the Department of Conservation and Development, and the Local Government Commission. In 1936–37, he served as national supervisor of field work in rural research for the Works Projects Administration, and wrote or edited several studies for that New Deal program. Numerous professional organizations requested his services as a writer, editor, consultant, and organizer. His colleagues in various fields related to his work elected him president of the Southern Association of Rural Economists and Sociologists, of the North Carolina Conference for Social Service, and of the Historical Society of North Carolina.

Notwithstanding his demanding schedule, Hobbs found time to write numerous articles and books. His most noteworthy studies were Gaston County: Economic and Social (1920), North Carolina: Economic and Social (1930), and North Carolina: An Economic and Social Profile (1958), a revised and expanded edition of his 1930 study. In addition to a voluminous compilation of facts on the natural resources of North Carolina, agricultural and industrial production, size of farms, public services, personal income, level of education, and related matters, each of these studies displayed scrupulous accuracy and a determination to face facts, even when they were not flattering to the state. Hobbs's work was based on an underlying assumption that if North Carolinians were presented with the relevant information they would take the appropriate action to develop the state's natural and human resources. Nevertheless, despite his appeal to a common interest, there were issues of justice and equality involving conflicting interests that were not inevitably solved by economic development. Hobbs did not address these issues, nor did he offer theories to explain the causes and consequences of modernization. And perhaps because he grew up in a poor county, in a poor state, he expressed few reservations about the noneconomic costs of growth and development. Yet within the limits of his approach, he helped develop methods and institutions to obtain and interpret the mass of data necessary to make policy decisions in a modern state.

Hobbs's interest in agriculture was never simply in the abstract; it involved farms and farmers, childhood memories, and a love of the soil. In 1936 he acquired a farm in Orange County where he grew crops, raised livestock, and experimented with ways to increase productivity.

In 1922 Hobbs married Mary Virginia Thomas of Baltimore. They were the parents of three sons: Samuel Huntington III, William T., and Robert Branson. Not long after his retirement from teaching, Hobbs died in The University of North Carolina's Memorial Hospital and was buried in the old Chapel Hill Cemetery.