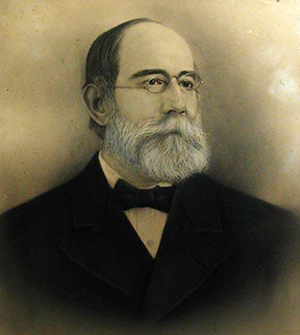 Peter Evans Hines, physician, was born in Warren County, the son of Congressman Richard Hines and his second wife, Ann Edmunds Spruill. He was named for his mother's older half brother, Peter Evans of Old Sparta, Edgecombe County. Hines was prepared for college at Lovejoy's Academy in Raleigh and in 1849 was graduated from The University of North Carolina, where he received an M.A. degree in 1852. In July 1849, he began to study medicine under Dr. C. E. Johnson of Raleigh. He was graduated with high honors from the medical school of the University of Pennsylvania in 1853. The following year he was an intern at St. Joseph's Hospital in Philadelphia.

During 1854–55 Hines continued the study of medicine in the great hospitals of Paris. He then established a practice in Raleigh. When the Civil War broke out, Governor John W. Ellis appointed him surgeon of the First Regiment of North Carolina Volunteers, the famous Bethel Regiment. In 1862 he was named medical director of all the hospitals in the Petersburg, Va., division. Later that year he was made medical director of the general hospitals of North Carolina, a post he held until the war ended.

After the war Hines was president of the Wake County Medical Society, of the Raleigh Academy of Medicine (1876–95), and of the North Carolina Board of Medical Examiners (1878–84). From 1894 until his death he was superintendent of health of Wake County, and for many years he was city physician of Raleigh.

A devout Episcopalian, Hines served in 1890 as a vestryman of Christ Church, Raleigh, and as a member of the Standing Committee of the Diocese of North Carolina. He filled both of these positions at the time of his death. In 1882 he married Frances Iredell Johnson of Raleigh, but they had no children. Hines was buried in the family plot in the Old City Cemetery, Raleigh. His widow gave his medical library of 500 volumes to the library of The University of North Carolina.

Kemp P. Battle, History of the University of North Carolina (1924).