Andrew Dousa Hepburn, professor and president of Davidson College, was born in Williamsport, Pa., the son of Samuel, an attorney and Democratic state judge, and Rebecca Williamson Hepburn. Andrew grew up in Carlisle, Pa., and attended Jefferson College in Canonsburg, leaving briefly in 1850 to teach at a small school in La Porte, Ind. In 1851 he entered the University of Virginia to pursue two years of advanced study in Latin, Greek, German, natural science, and moral philosophy without taking a degree. After a year of "general reading," or independent study, during 1853 and 1854, he enrolled in the Princeton Theological Seminary and was graduated in 1857. Until his ordination in the southern Presbyterian church (Lexington Presbytery) on 22 Oct. 1858, he was "stated supply" at a church in Harrisonburg, Va.; he then became pastor of a church in New Providence, Va. 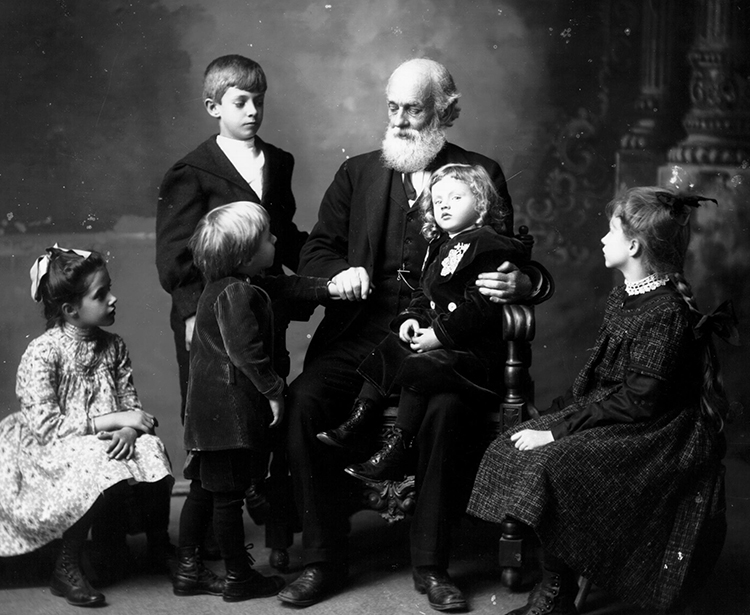 At its meeting in December 1859, the board of trustees of The University of North Carolina elected Hepburn professor of metaphysics, logic, and rhetoric; he assumed his chair in the autumn of 1860. Siding with the Confederacy during the Civil War, he remained in Chapel Hill until the 1864–65 academic year, when he took leave to serve as temporary supply pastor for the First Presbyterian Church in Wilmington. While there, in February 1865, he led a delegation of civilian dignitaries who formally surrendered the city to Union forces; his address on this occasion, considered excessively conciliatory by some, caused a brief controversy from which he nonetheless emerged unscathed. During the summer of 1865 he traveled in Germany and studied at the University of Berlin.

In 1867, unable to support his family on his truncated postwar salary, Hepburn resigned his professorship; yet he remained close to the University for the rest of his life. At the commencement of 1867, he delivered the eulogy for the Reverend Dr. James Phillips, the senior professor, who had died in April. Later that year, the board of trustees officially consulted him about reforms to the curriculum. In 1881 he was awarded the honorary LL.D. degree, and in 1883 he delivered the baccalaureate sermon. Before leaving the state, Hepburn represented the Orange Presbytery at a conference in Philadelphia in November 1867, aimed at reconciling the northern and southern branches of the Presbyterian church; however, he declined to vote for any merger plan, in accordance with his instructions as a delegate.

In 1868, Hepburn joined the faculty of Miami University of Oxford, Ohio, as professor of English literature; in 1871, he became president of the university. When Miami temporarily closed in 1873, he returned to North Carolina as a professor at Davidson College, first in the chair of Latin and French (1874–75), then in his preferred chair of mental philosophy and English literature (1875–85).

Davidson's board of trustees elected Hepburn president of the college in 1877. While in office, he succeeded in having abolished the master of arts degree, at that time awarded automatically to select alumni regardless of academic effort in imitation of archaic English academic custom. His comprehensive proposals for curriculum reform included increased course offerings in English, French, and German; elective, rather than mandatory, programs in Latin and Greek; and a four-year program in Bible studies. Each of these was eventually adopted by the college. Impressed with the systems of self-regulation through an honor code, which he had observed at Virginia and North Carolina, he attempted to set up a similar system at Davidson in place of faculty proctoring. In this case, however, he was frustrated by tradition-minded professors and trustees. The Davidson honor system, tentatively enacted in 1880, was rescinded by the trustees after an unfortunate hazing episode at the commencement of 1881 (it was reenacted years later). Other initiatives proceeded slowly, if at all.

These frustrations, plus a desire to return to active teaching, led Hepburn to resign the presidency at Davidson in 1885 and to accept reappointment as professor of English literature at Miami of Ohio, which had reopened the same year. He held the latter position until his retirement in 1908.

Hepburn died in Oxford, Ohio. In addition to his honorary degree from The University of North Carolina, he received an M.A. degree from Jefferson College (1860) and a doctor of divinity degree from Hampden-Sydney (1876). Hepburn Hall, on the campus of Miami of Ohio, was named in his honor.

Hepburn was the author of a Manual of English Rhetoric (1875), as well as several reviews and critical articles. Yet he was most highly regarded by his contemporaries for his abilities as a classroom teacher. In the words of Kemp P. Battle, "Dr. Hepburn's career . . . was distinguished for excellent scholarship, inspiring teaching and preaching, a style in writing which was a model of pure English, and for the lofty virtues of a gentleman and a Christian."

Philip N. Moore, Remarks at the Unveiling of the Hepburn Memorial Tablet... (1923).