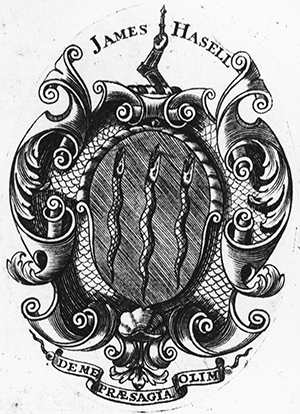 James Hasell, judge, councillor, and acting governor, was a native of Bristol, England, the son of James Hasell, a merchant. He served an apprenticeship in Bristol from 1714 to 1721. After immigrating to Philadelphia, where he remained briefly, Hasell settled in New Hanover County, N.C., around 1735. Samuel Hassell of Philadelphia, perhaps a relative, had lived in Newton (afterwards named Wilmington) at some time between 1733 and 1739.

Hasell married Susannah (or Sarah) Sampson, the widow of John Sampson; his stepdaughter, Ann Sampson, became Edward Moseley's second wife. Thus Hasell was early allied with one of the most prominent political leaders in the colony. He purchased three town lots in Wilmington and became a justice of the peace in 1739. Within seven years he was one of the largest planters in the county, with over 2,000 acres of land. As a prominent Cape Fear social figure, Hasell came to the attention of Governor Gabriel Johnston, who nominated him to the royal Council in 1747. Two years later, on 2 October, he assumed the seat of the deceased Edward Moseley under an emergency appointment, his official mandamus not arriving until 1752. Hasell served on the Council until it was abolished in 1775 and was its most dominant member during its final fifteen years.

Although he had no formal legal training, much of Hasell's career in the colony was tied to the higher courts—those above the county level. He served as chief justice of the General Court (and its later offshoots, both supreme and superior courts) from 1750 to 1755, 1758, to 1759, and 1766 to 1767. In September 1753 he was named chief baron of the Exchequer Court, a largely honorary function that paid a salary of £40 a year. He retained this office until the American Revolution, resigning it temporarily in 1758 and 1766 during his brief service as chief justice. Governor Arthur Dobbs, who criticized his lack of formal training in 1754, saw fit to appoint Hasell chief justice again in 1758 on the death of Peter Henly, while Governor William Tryon praised Hasell as chief justice in 1767.

Despite his distinguished service on the bench, it was as a royal councillor that Hasell performed his major services. His work in the Council was commended by governors Dobbs, Tryon, and Josiah Martin, all of whom frequently sought his counsel, and his loyalty to the Crown was steadfast. Martin even tried to have him made lieutenant governor in 1771. Whereas some councillors vacillated during the Stamp Act agitation in 1765, Hasell openly supported Crown policy. During the critical years just before the Revolution, he remained the only councillor on whom Governor Martin felt he could rely consistently. Hasell was president of the Council from early 1760 to 1775, and as such sometimes acted as chief executive during the governor's absence from the colony, serving, for example, after Tryon departed in 1771 and before Martin arrived. When Martin was in New York on business in January 1775, Hasell prorogued the Assembly because of the revolutionary fervor building there. In April he urged the governor to disrupt the Provincial Congress when every other councillor advised caution. 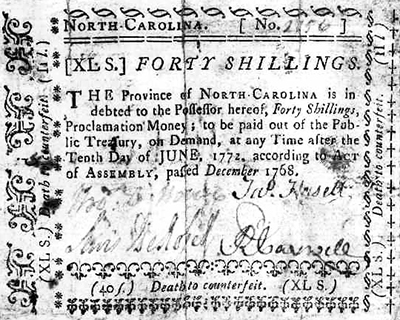 After July 1775 the Council did not meet again, and Hasell withdrew to his plantation, Hasell's Place, just above present-day Carolina Beach and opposite Cabbage Inlet. His property was not confiscated during his lifetime, but was seized after his death; however, it was restored to his family in 1802. At his death Hasell owned 12,000 acres of land. His will mentions his son, James (1727–69) (by his first wife), and his second wife, Ann Sophia Von Blade Durlace, widow of Baron Von Rosentine, with whom Hasell signed a marriage agreement on 20 Dec. 1755. Hasell left a large and varied library, his books bearing an engraved armorial book-plate. Many of them are now in the North Carolina Collection in Chapel Hill. To his son he left "all the family pictures."