Franklin Wills Hancock, Jr., real estate developer, farmer, North Carolina legislator, U.S. congressman, federal official, and county judge, was born in Oxford, the only son and one of four children of Franklin Wills and Lizzie Hobgood Hancock. His father was a descendant of William Hancock, the brother of John Hancock, signer of the Declaration of Independence; he became a registered pharmacist in North Carolina in 1881, was a member of the state pharmacy board for fifty years, and helped organize the School of Pharmacy at The University of North Carolina. On the younger Hancock's maternal side, his great-grandfather, William Royall, was a noted Baptist minister and professor at Wake Forest College. His uncle, Frank P. Hobgood, Jr., was special assistant to the U.S. attorney general in the prosecution of oil land suits.

Hancock was educated in the Oxford public schools until age thirteen, then attended Horner Military Academy for one year before entering The University of North Carolina in 1912. There he pursued regular academic work and studied law, using borrowed funds to pay his way through college. After working as a secretary to his maternal uncle, Frank Hobgood, in Wyoming in 1915, he was admitted to the bar in North Carolina on 28 Aug. 1916 and began to practice law in Oxford. As a well-respected attorney and businessman, Hancock was active in many civic and business organizations, including vice-president of the Granville Real Estate and Trust Company. He became chairman of the Democratic executive committee in Granville County and was a Democratic presidential elector in 1924. 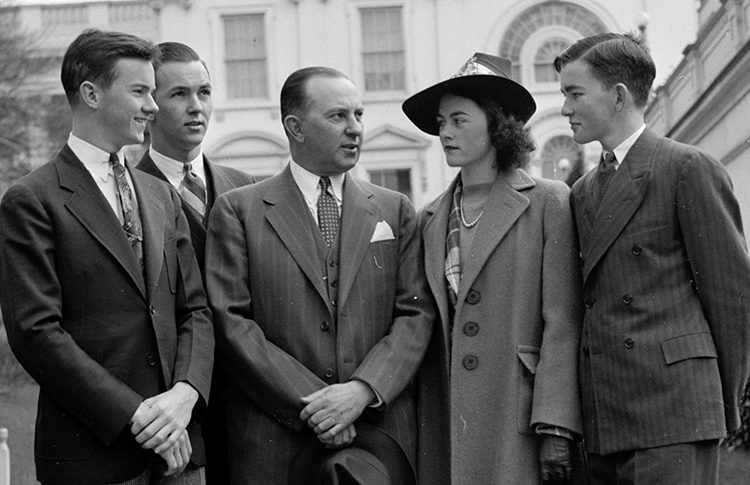 Without opposition Hancock was elected in 1926 to the North Carolina Senate, representing Granville and Person counties. Also without opposition he was elected in 1928 to represent Granville County in the North Carolina House of Representatives. He was author of an education act in the General Assembly, which, although unpopular among teachers and school superintendents, did reduce school taxes in many counties of the state.

On 7 June 1930, Hancock defeated Andrew Fuller Sams in the Democratic primary to succeed Charles Manly Stedman as U.S. representative for the Fifth Congressional District (Caswell, Forsyth, Person, Rockingham, Stokes, and Surry counties). When incumbent Congressman Stedman died on 23 Sept. 1930, the way was cleared for Hancock's election to complete his unexpired term as well as to fill the new term. Thus, on 1 Dec. 1930, Hancock entered Congress and served through repeated elections until 1938, becoming a prominent member of the House Committee on Banking and Currency.

Ambitious for higher office, he considered challenging Josiah Bailey for the U.S. Senate in 1936, but in October 1937 he announced his candidacy for the Senate seat held by Robert Rice Reynolds. In the primary Hancock sought unsuccessfully to court the more conservative wing of the Democratic party, claiming that his voting record was less supportive of the New Deal than that of Reynolds. He also attacked the flamboyant Reynolds's style, which had made the senator an object of derision by much of the press. Defeated by Reynolds, Hancock was appointed to a six-year term on the Home Loan Bank Board, an appointment that Reynolds had coveted for his supporter George A. Coan, Jr., Works Progress Administrator in North Carolina. Hancock had the backing of building and loan officials over the nation as well as in North Carolina. He served in the new position from 4 Jan. 1939 until 24 Apr. 1942.

The Home Loan Bank Board was an agency that chartered and supervised federal home loan banks and federal savings and loan associations. During World War II, in an executive reorganization, the board became the Federal Home Land Bank Administration in the National Housing Agency. With the abolition of the board, Hancock lost his post and was appointed by President Franklin D. Roosevelt as a special representative to the Reconstruction Finance Corporation and to the Defense Plant Corporation where he served until June 1943. Because these appointments did not require his constant presence in Washington, he was able to return to Oxford where friends persuaded him in 1943 to run, unopposed, for another term in the North Carolina House of Representatives.

While a member of Congress in the 1930s, Hancock supported passage of the Bankhead-Jones Farm Tenant Act, which provided low-interest loans to share-croppers and tenant farmers. The administration of these rural relief programs was located in the Farm Security Administration (FSA), which in the 1940s came under increasing criticism from conservative congressmen and agricultural interests. Much of the criticism focused on the program's creation of experimental cooperative farms and on FSA administrator C. B. Baldwin. After Baldwin was forced to resign in August 1943, Hancock was named as his replacement. Hancock's earlier ties with congressmen and his more conservative administrative posture made him an appropriate choice for the position. He was called to testify before a special investigating committee headed by North Carolina's Harold D. Cooley. As FSA administrator, he attempted to operate the programs on a more businesslike basis while rapidly liquidating resettlement projects and discontinuing the cooperative farm associations supported by the FSA. For example, in his first letter to divisional directors in November 1943, Hancock urged them to survey their spending of funds "in the same way and with the same degree of interest you would do and manifest if the funds allocated to your region were coming out of your own personal earnings." He sought through these measures to demonstrate an economy of operation to cajole sufficient appropriations from a skeptical Congress.

In general, Congress was pleased with his administration of the program although its appropriations continued to decline. Even Hancock became discouraged, however, and resigned from the position in November 1945. Meanwhile, from 1 Dec. 1944 until August 1945, he also served as president of the Commodity Credit Corporation, another agricultural support program that was being phased out in response to conservative criticism in Congress. For these efforts in Washington, Hancock was named by the Progressive Farmer "Man of the Year for North Carolina" in 1945. He had helped tenants become home owners, he had brought greater efficiency to the FSA, and he had handled $4.5 million in farm loans to returning veterans.

Back in North Carolina, Hancock first indicated that he might consider running for governor. But the climate was not right for such a race, and instead he resumed his law practice and became immersed in the development of commercial and residential real estate. In his later years the latter ventures were as far afield as Florida and Virginia. In addition, he was elected to serve as judge of the Granville County Recorder's Court from 1950 to 1954. He continued his civic activities and his abiding devotion to the Baptist church. His philanthropic interests included establishment of the Hancock Health Center, which he donated to Granville County as a memorial to his parents.

In 1917 Hancock married Lucy Osborne Landis of Oxford. They had four sons (Franklin Wills III, who followed his father in the General Assembly from Granville County in 1947; and Charles Hamlin, Robert Denard, and Alexander Hamilton, all of whom remained in the Oxford area) and three daughters (Mrs. Faison Keuster of Charlotte, Mrs. G. T. Moore of Oxford, and Mrs. J. M. Faulkner, Jr., of Raleigh).

Hancock died in Oxford, where he was buried in the Elmwood Cemetery.

Sidney Baldwin, Poverty and Politics: The Rise and Decline of the Farm Security Administration (1968).