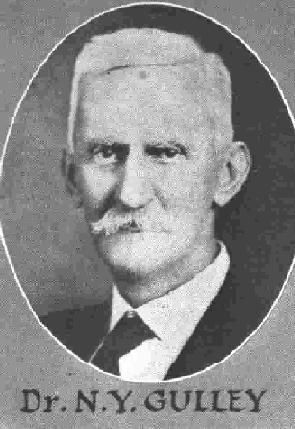 Needham Yancey Gulley, founder and dean of the Wake Forest Law School, was born near Clayton in Johnston County, the son of N. G. Gulley, a farmer, and Jaylie Grady Gulley. After spending his early years on his father's farm, Gulley began his education at the Clayton Academy in the early 1870s. In 1874 he entered Wake Forest College, where he was graduated with an M.A. degree in 1879. As a young teacher, Gulley found his first job in nearby Raleigh at the Centennial School. He taught until July 1881. When the legislature voted to establish normal schools for the training of teachers, Gulley went to The University of North Carolina summer school to teach arithmetic and arithmetic methods to four groups daily.

After teaching for a year and a half, he returned to his native Johnston County as principal of the Smithfield public school. About this time Gulley also began his lifelong interest in the legal profession and read law under E. W. Pou. He was licensed to practice at the age of twenty-six. In 1882, he moved to Franklinton where he continued to teach and then became principal of the public school. Gulley began a law practice in 1883 and in the same year became the editor of the Franklinton Weekly. A successful lawyer, he was elected to the state house of representatives from Franklin County in 1885 for a single term.

In 1893, the Wake Forest College trustees made provision for the establishment of a school of law. Although the law school was advertised to begin in the fall of 1893, with N. Y. Gulley as its professor, not one student appeared during the whole academic year. Refusing to accept defeat, Gulley traveled to Wake Forest College from Franklinton once a week in a buggy pulled by a sorrell nag to give free lectures on some points of law, thereby hoping to interest enough students in the profession to start a law school the next year. Only one student appeared in the summer of 1894; however, when twelve more enrolled in the fall session, Gulley was employed as chairman of the department of law. The department continued to grow for ten years, and in 1905 he was made dean of the School of Law and another instructor was employed to assist him. Gulley set aside the old practice of asking questions, book in hand, and began teaching his students about law.

From this point Gulley's activities became more varied. He served on the Wake County board of education for many years and was chairman at the time of his death. He entered the legislative battle for improvement of the public schools and was one of its outstanding champions for over forty years. He was one of three members of the North Carolina Code Commission that revised the statutes of the state between 1903 and 1906. When national officials prepared the Cyclopedia of Law and Procedure, he was selected to write a chapter.

Approximately 1,700 men received instruction from Gulley during the fifty-four years he taught law; for twenty-three years everyone who studied under him passed the state bar examination. His former students included federal judges, solicitors, supreme court justices, congressmen, and senators. "I try to make what I teach so obvious that my men can't miss it," he explained on one occasion. Gerald Johnson noted that Gulley had written much of the law of North Carolina "but his important writing is the way he has written 'Justice' indelibly upon the minds of young men." Gulley retired as dean in 1935, but continued to teach until 1938, when he settled on a small farm near Wake Forest to look after his cows and horses. With Pearl Harbor, several key members of the law school were given responsible government positions in the space of three short months and replacements were hard to find. In March 1942 Gulley returned to his old post and once again began teaching civil procedure.

Gulley died peacefully at his home in Wake Forest after a short illness, in his ninety-first year. After funeral services in the Wake Forest Baptist Church, he was buried in the Wake Forest Cemetery. A photograph (in the Exum Beckwith Album) and an oil portrait (ca. 1894) are in the Baptist Historical Collection, Wake Forest University.