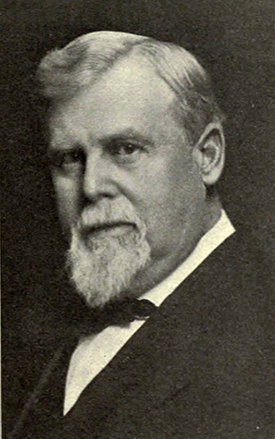 William Alexander Graham, Jr., farmer and state commissioner of agriculture, was born in Hillsborough, the third of nine sons of William Alexander Graham, a governor of North Carolina and secretary of the navy, and Susannah Sarah Washington Graham, daughter of John Washington of New Bern. Through his father, William A. Graham, Jr., was related to some of the most influential families of Piedmont North Carolina: the Alexanders, Brevards, Davidsons, Morrisons, and Witherspoons. He received his early education in the various places where his father's career took the family, first in Hillsborough (Caldwell Institute), then in Raleigh and Washington, D.C. (Union Academy). He entered The University of North Carolina in 1856, but transferred in 1859 to Princeton University where he was graduated with an A.B. degree in 1860.

At the outbreak of the Civil War, Graham joined the Confederate forces as a second lieutenant in Captain Josiah Turner's cavalry unit later known as Company K, Nineteenth Regiment. From the minor skirmishes in eastern North Carolina in which he was first engaged (Gillet's Farmhouse and Brandy Station) to the Battle of Gettysburg where he was wounded, Graham displayed the dogged determination, energy, and leadership that characterized his later years as farmer and public servant. Upon his recovery, he was promoted to the rank of major (sometime earlier he had succeeded Turner as captain of the company) and was reassigned as assistant adjutant general of the North Carolina forces in Raleigh, where he spent the remainder of the war years.

On 8 June 1864 he married Julia R. Lane, daughter of John Wayles Lane of Amelia County, Va. After the war Graham, who had always intended to become a farmer, moved to the Lincoln County plantation of his grandfather, General Joseph Graham, of Revolutionary War fame, where the Grahams had first established themselves in North Carolina by land investment and iron ore production. During the difficult Reconstruction years, Graham steadily improved the resources and productivity of the plantation through hard work and shrewd management. He kept abreast of all new developments in methods and machinery, and was an active supporter of the Farmer's Alliance, serving as president in 1901, 1902, and 1905. Graham conceived and implemented the plan of the Alliance's business agency, unique in the United States, and was a trustee for its fund.

During the same period Graham's interest in politics led in 1867 to his nomination by the conservatives as a candidate to the constitutional convention. However, because of his extreme conservatism and stand against the enfranchisement of African-Americans, he was defeated. Throughout his life, he maintained a belief in white supremacy along with a corresponding lack of sympathy for the plight of the African-American both in bondage and in freedom. Despite his initial defeat, he continued to pursue a political career as a conservative Democrat. In 1874 and 1878 he received the unanimous nomination for and was elected state senator from his district of Lincoln and Gaston. He also represented the district in the legislature in 1905. As might be expected, Graham served the farmers' interests and successfully introduced legislation prohibiting the traditional deduction (scale charge) for each bale of cotton, making verbal contracts legal and giving priority to labor in suits for wages against individuals and corporations. These achievements led naturally to his appointment to the Board of Agriculture in 1899. He remained in that post until 1908, when he was elected state commissioner of agriculture, a position he held until his death.

Graham is remembered best for the work he accomplished as agricultural commissioner. He first turned his attention to the causes of the economic slough in which agriculture in the state was then mired. This problem, which had never been seriously investigated or understood, preoccupied Graham for the rest of his life. The interlocking causes were poor soil, poor farming methods, poor machinery, poor crop strains and animal stock, and the consequent low production and dependence on imported foodstuff. To remedy this blight, he established laboratories and experimental stations to study and improve soil conditions and to develop new strains of seed, new varieties of crops, and new treatments for orchards and truck gardens. He imported good animal stock. Finally, he established farmers' institutes where demonstrations of improved farming methods, machinery, and home improvement helped the farmer and his family raise the performance of their varied tasks.

Within a decade Graham's work produced impressive results: the vast improvement of soil, livestock, farm machinery and methods, and overall production. His insight, resourcefulness, organizational ability, and persistence changed the course and conditions of agriculture in North Carolina.

An ardent supporter of the Baptist church, Graham served as moderator of the South Fork Baptist Association from its beginning in 1878 until 1906 and wrote a history of the association. He was a trustee of the Southern Baptist Seminary and of the North Carolina College of Agriculture and Engineering.

Interested in history, like his father and grandfather before him, he wrote various articles on the Revolutionary and Civil wars and a history of the Nineteenth Regiment and of the Adjutant General's Department for Histories of the Several Regiments and Battalions from North Carolina in the Great War 1861–'65 (1901), edited by his brother-in-law Walter Clark. He also edited General Joseph Graham and his Papers on North Carolina Revolutionary History (1904), for which he wrote a biographical sketch of his grandfather and a history of iron production in Lincoln County. Equally valuable for the history they contain are many still unpublished letters from Graham to his parents in the decade 1859–69.

Graham died in Raleigh and was buried in the old Machpelah burying ground near Iron Station, Lincoln County. His second wife, Sally Hill Clark (1864–1936), whom he had married in 1914, survived him, as did eight of his eleven children, all from his first marriage to Julia Lane (1845–1909). They were Florence Lane, Susan Washington (m. Casper Walke in 1895), Evelyn Taylor (m. Slaughter W. Huff in 1892), William Alexander, Elizabeth Hill (m. James P. Parker in 1906), Mattie Lawson, Sophie Alexander, Caroline Brevard, Alice Caldwell (m. Montague Clark in 1908), Ellen Wayles (m. John Calvert in 1914), and Joseph (m. Bessie Fitzsimmons in 1915).

I'm interested in the skirmish at the Gillet Farm. We know it was along the White Oak River in Jones County and we know the location of Thomas S. Gillet's grave, the owner of the farm at the time of the skirmish.

The skirmish at Gillett's farm occurred on the 13th of April 1862. I am uncertain as to whether it was Jones or Onslow county -- it seems to be very close to the county line, and most references I have seen indicate Onslow.

In any event, if you are looking for more information, you might be interested in these resources:

Records of The War of Rebellion by the U.S. War Department.  They are available at both the Hathi Trust and on Internet Archive.  Here is a link to a volume with a specific reference to the skirmish: https://archive.org/stream/warofrebellion09secrrich#page/296/mode/2up.

There is also some information and a map on a Civil War battle site created by NC State University: https://sites.google.com/a/ncsu.edu/battleground-north-carolina/home

I am the great grandson of

I am the great grandson of Evelyn Graham Huff, Major Graham's daughter. I have additional family photos of William Alexander Graham Jr. for those that might be interested. Henry Edward Bedford III

I'm related to W.A. Graham,jr by virtue of the marriage between Chief Justice Walter Clark and Susan Washington Graham. Owe the land farmed by William A. Graham. Hoping that you will share some of photographs. Do you have any showing the farm in Lincoln County?