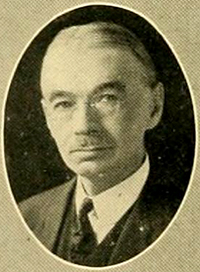 William Henry Glasson, economist, first dean of the Duke University Graduate School, author, and editor, was born in Troy, N. Y. A first-generation American whose parents had emigrated from England shortly before his birth, he was the son of John Glasson, a native of Cornwall, and Agnes Allen Pleming Glasson, the daughter of a master tailor in Probus. He received the Ph.B. degree from Cornell University in 1896, the Ph.D. from Columbia University in 1900, and the LL.D. from Duke University in 1939.

Glasson began his professional career as a fellow in political economy and finance at Cornell (1896–97), Harrison Fellow of Economics, University of Pennsylvania (1897–98); and fellow in administration, Columbia University (1898–99). From 1899 to 1902 he was head of the history and civics department in the George School, Newtown, Pa. He became professor of political economy and social science at Trinity College in 1902; was appointed chairman of the faculty committee on graduate instruction in September 1916, when the college had only six graduate students; and was named the first dean of the graduate school of arts and sciences at Duke University in 1926, in which capacity he served until 1938. By that time 249 graduate students were enrolled. Glasson continued to teach at Duke until 1940. He was also professor of economics during the summer session at Cornell University in 1907, acting professor of economics and politics at Cornell in 1910–11, nonresident lecturer at Johns Hopkins University during the spring of 1913, and professor of economics at the University of Virginia during the summer quarter of 1928.

In addition to his teaching and administrative responsibilities, he was coeditor of the South Atlantic Quarterly with Edwin Mims (1905–9); and both joint editor with President William P. Few, of Trinity College, and managing editor of the Quarterly (1909–19). He also served as advisory editor of the National Municipal Review (1912–22). From 1940 to 1945 he was a director of the South Atlantic Publishing Company. An authority on the U.S. pension system, Glasson was the author of History of Military Pension Legislation in the United States (1900) and Federal Military Pensions in the United States (1918), as well as a contributor to The South in the Building of the Nation (1910) and the Cyclopaedia of American Government (1913). Many of his articles appeared in the South Atlantic Quarterly (1905–19), Annals of the American Academy of Political and Social Science, National Municipal Review, Review of Reviews, Survey, the publications of the American Economics Association and of the North Carolina Literary and Historical Association, and other economic and historical periodicals. He contributed poetry to various newspapers and magazines, and in 1945 was a feature writer for the Cornell Countryman.

His influence extended far beyond university campuses and scholarly publications. When he gave up the deanship of the graduate school in 1938, A. A. Wilkinson, director of the Duke University News Service, wrote: "It is entirely no coincidence that Dean Glasson's years of activity have paralleled development in the educational, economic, and social life of the South: he has had a definite part in those phases of life that have come within the range of his participation." His academic and other achievements were often so closely interwoven that they cannot be easily separated.

Glasson's first experience in helping to mold public opinion came with his involvement in the famous Bassett case, which centered national attention on Trinity College and, in particular, John Spencer Bassett, who was being excoriated by much of the southern press for an opinion he had stated in the South Atlantic Quarterly of October 1903. The affair was concluded when Trinity College took a strong, unequivocal stand on academic freedom. Glasson served on the committee that wrote the memorable document on the subject which was duly signed by the faculty and accepted by the college trustees on 1 Dec. 1903.

As early as 1909 he was an advocate of the Australian ballot in North Carolina elections. Also in 1909, he was appointed by President William H. Taft to serve as the supervisor of the U.S. Census of 1910 for the Fifth District of North Carolina. He resigned after a few months, however, because of the political opposition of John Motley Morehead, Republican congressman from the district. (His objection was that Glasson had not been born and reared in the state.) During 1913–18 Glasson was a collaborator in the division of economics and history of the Carnegie Endowment for International Peace. Soon after World War I Mayor John M. Manning appointed him a member of the Durham City Housing Commission; from 1919 to 1923 he was on the City Board of Education. For many years he was a director of the Home Building and Loan Association and of the Morris Plan Industrial Bank. Because of his early interest in medical insurance, he became one of the first directors and vice-president of the Hospital Care Association of North Carolina (1933–35). In the summer of 1934 he visited Germany on the Carl Schurz goodwill tour, visiting a number of cities including those in the Saar district. He was appointed by Governor J. C. B. Ehringhaus to serve as a member of the North Carolina State Commission for the Study of Plans for Unemployment Compensation or Insurance (1934–35).

Glasson was a Methodist and a Republican. He was a member of Phi Beta Kappa (charter member and president of the Trinity chapter when it was installed on 29 Mar. 1920, and secretary for the South Atlantic District 1925–37); Kappa Delta Pi; American Economics Association (member of the executive committee, 1916–18); Conference of Deans of Southern Graduate Schools, 1927–37 (an organizer of the conference and, in 1929, president); and Quill and Dagger, Cornell University.

On 12 July 1905, he married Mary Beeler Park, a native of Speedwell, Ky., and a 1902 graduate of Cornell. They were the parents of four children: Lucy (Mrs. Harold Wheeler), Mary (Mrs. Thomas Preston Brinn), Marjorie (Mrs. Norman Ross), and John, M.D. While returning from a meeting in Raleigh on 9 Dec. 1934, he was seriously injured in an automobile accident. After years of invalidism, he died at his home in Durham and was buried in Maplewood Cemetery. His papers and a portrait by Irene Price are in the William R. Perkins Library, Duke University.