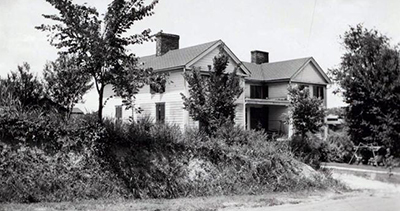 Jesse Franklin, Revolutionary War soldier, representative, U.S. senator, and governor, was born in Orange County, Va., the son of Bernard and Mary Cleveland Franklin. A brother, Meshack, also served in Congress and in the North Carolina General Assembly. The Franklins moved to the Mitchell River area of Surry County on the eve of the American Revolution. Enlisting in the regiment of his maternal uncle, Colonel Benjamin Cleveland, Jesse was present at the battles of Kings Mountain and Guilford Court House. He ended his military career with the rank of major. Settling in Wilkes County after the Revolution, he represented that county in the House of Commons from 1784 to 1787 and from 1790 to 1792. In December 1789 the Assembly appointed him a councillor of state. In 1792 he moved to Surry, which he represented in the House of Commons in 1793 and 1794. He then served one term in the U.S. House of Representatives from March 1795 to March 1797. Surry returned him to the legislature in Raleigh in 1797 and 1798.

The 1798 General Assembly sent Franklin to the U.S. Senate, electing him over Alexander Martin and Benjamin Smith. As president pro tempore from March 1804 to January 1805, he presided during the period of the impeachment trials of federal judges John Pickering and Samuel Chase and the Burr-Hamilton duel. Near the end of 1804 the General Assembly selected Montford Stokes to replace him in Congress. Stokes, however, refused the Senate seat. Back home for the moment, Franklin was again sent by Surry County to the state senate in 1805. In late 1806, he was returned to the U.S. Senate where he served until replaced by David Stone in March 1813. In the assemblies of 1814 and 1815 Franklin was again a nominee for his old senate seat in Washington, but was defeated by Francis Locke in 1814 and by Nathaniel Macon the next year. Between 1805 and 1817 he served as trustee of The University of North Carolina.

Franklin, David Meriwether, and Andrew Jackson were appointed commissioners to treat with the Cherokee and Chickasaw Indians in 1816. The same year Franklin was a Republican elector in the presidential election; he also was elected by the Assembly to serve the first of four successive terms as a councillor of state. Finally, in 1820 the Assembly honored him once again, this time by electing him governor over Gabriel Holmes. Franklin was now sixty years old, weighed over two hundred pounds, and was in poor health. Twelve months later he declined another term, and Holmes succeeded him.

Franklin married Meckey Perkins, daughter of Hardy Perkins of Rockbridge County, Va. They had three sons and five daughters. The old governor died at home in Surry County after nine months' confinement with edema or dropsy. Like Macon, he had never allowed a portrait of himself to be painted. He was buried at Guilford Court House National Military Park, Greensboro.

Great research more detailed than most about Jesse Franklin. He is my3 great grandfather
Good job saved me a lot of time n research