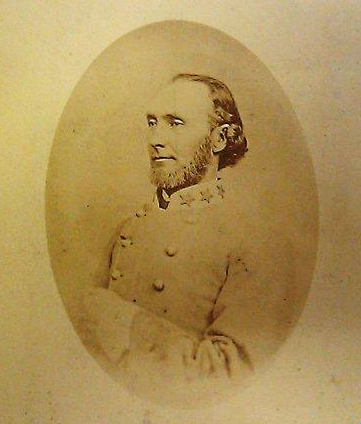 Dennis Dozier Ferebee, Confederate officer and political leader, was born in Currituck County but in 1834 moved to Camden County to make his permanent residence in South Mills. His grandfather, William Ferebee, represented Currituck in colonial assemblies and his father, Samuel Ferebee, was a man of considerable local prestige. His mother, Peggy Dauge Ferebee, was a descendant of the French Huguenot immigrant, Peter Dauge. (The name Dauge was later changed to Dozier). Dennis Dozier was the fourteenth child of Samuel and Peggy Ferebee. After he was graduated from The University of North Carolina in 1839, he studied law with Judge William Gaston of New Bern but practiced only briefly. In 1842 he married Sarah McPherson, the daughter of a wealthy planter, Willie McPherson; she inherited a substantial share of her father's vast estate, which Ferebee returned to South Mills to manage. Three years later he was elected to the House of Commons; he was reelected in 1848, 1856, 1858, and 1860.

Ferebee opposed secession as unconstitutional, maintaining that the Constitution of the United States "is not a league of confederacy but a government founded on the adoption of the people" and "no state authority has power to dissolve these relations." He lost his point, of course, and, like the majority of his fellow citizens, wholeheartedly cast his lot with the Confederacy and joined the Southern army. He was the first commander of the Fifty-ninth Regiment of North Carolina troops (Fourth Cavalry), which was organized at Garysburg in the summer of 1862. On 8 May 1863 orders came for Colonel Ferebee to report to General Robert E. Lee for duty. His regiment fought with distinction and valor from North Carolina to Gettysburg.

After the downfall of the Confederacy, Ferebee became an active state figure. He was elected to the North Carolina Convention of 1865, where he took a prominent part in the debates. In the General Assembly that followed the convention, he was defeated by Thomas Settle for speaker of the senate. He was later appointed by Governor Jonathan Worth to work with W. A. Graham and Judge William H. Battle as a committee to investigate the circumstances of the university, which was closed from 1871 to 1875 because of political control and lack of support from the public. After submitting the committee's report Ferebee returned to his home and family in Camden County.

In his diary his son Nelson wrote, "When we returned home to South Mills in November 1865, everything was in a bad way. My father was in debt and had no capital to start again. My mother cooked and I did the out-door work. My father was trying to get his affairs in shape to farm during the coming year." He succeeded and he did farm not only the coming year, but also for many years afterward. He died at his home in Camden County and was buried in the nearby family graveyard. A portrait of Colonel D. D. Ferebee in his Confederate uniform is owned by his great-great-grand-daughter, Mrs. Basil M. Duncan of Columbus, Ohio.

His only son, Nelson McPherson Ferebee, attended The University of North Carolina in 1867–68. After the university was closed, he went to Baltimore and later was graduated from the medical department of the University of Maryland. He practiced medicine one year in South Mills. On 12 September 1872, he received an appointment as assistant surgeon in the U.S. Navy. In 1902 he was made medical director, the highest rank he could obtain. Dr. Ferebee married Martha Thweat Gregory of Granville County. They had two sons and three daughters. Among his grandchildren is Nelson Ferebee Taylor, who in 1972 became chancellor of The University of North Carolina at Chapel Hill.