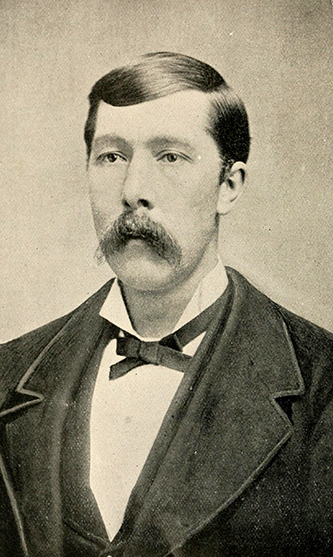 Shepherd Monroe Dugger, educator, orchardist, landscape architect, mining prospector, geologist, surveyor, road engineer, lecturer, author, and "wandering Bard of the Balsams," was born in Johnson County, Tenn., one of ten children of George Washington and Elizabeth Caroline McNabb Dugger. His family was among the first settlers of the mountain region along the Tennessee–North Carolina line. When he was an infant, the Duggers settled on a farm where the town of Banner Elk now stands. There he was educated at an old field school with a two-month autumn term. Afterward he immediately began teaching on a third-grade certificate at eighteen dollars a month. In 1875–76 he attended school in Weaverville, and for the next three years the Presnel Academy at Jonesboro, Tenn. Meanwhile, he visited Mount Airy, N.C., and met the Siamese Twins, and in 1876 traveled to Philadelphia for the Centennial Exposition. For the academic year 1880–81, he was a law student at The University of North Carolina, where he was an outspoken campus prohibitionist.

In June 1881 Dugger left the university to accept an appointment as the first superintendent of schools in Watauga County. After his marriage in October 1887 to Margaret A. Calloway, he spent nearly a year in middle Tennessee on business, then returned to Banner Elk when his first son, Balsam, was five weeks old. A second son was named Clarence. By the summer of 1891 he had begun giving lectures, had built a hotel to accommodate visitors to the mountains, and was surveying a turnpike from Elk Park to Valle Crucis. His wife died in December 1891 and his third son, Shepherd Monroe, Jr., seven months later. In 1892 he attended the Teachers Institute at Boone, gave a Fourth of July lecture at Eseeola Inn, Linville, and published The Balsam Groves of the Grandfather Mountain (reprinted 1895, enlarged 1907, 4th ed. 1934), a romantic novel whose extravagant vocabulary charmed readers far and wide. The book, entered in a one-thousand-dollar contest sponsored by the Linville Improvement Company to promote the Grandfather Mountain area, did not win a prize but was the only entry deemed sufficiently propagandistic for publication. Fame came to Dugger in 1894 when the Ladies' Home Journal printed a lengthy article on the book by editor Edward W. Bok, who termed it "unique, in that it may be said to have had no predecessor and probably it will be without a successor."

After his wife's death, Dugger sold his house in Banner Elk and moved to a hillside cabin where he made a home for his two sons while they were in school. Rarely idle, he pursued his interest in mining and surveying. In 1910 he was a census taker in Macon County. In 1915 he became superintendent of roads in Avery County (afterward humorously calling himself "The Colossus of Roads"), and for the next seventeen years served intermittently as a surveyor and highway engineer. During the 1930s Dugger was a familiar figure along the mountain roads, usually traveling on foot, though occasionally he would accept a ride in an automobile. Carrying only a walking stick, he moved about, giving lectures and readings, staying overnight wherever he found himself at sunset. He died in the home of a cousin at Matney on Craborchard Creek in Watauga County, and was buried by the side of his wife in the Banner Elk cemetery.

Dugger's The War Trails of the Blue Ridge (1932), containing local history and childhood reminiscences, was followed by two booklets: Romance of the Siamese Twins and Other Sketches (1936) and his memorial Remarkable Career of Mr. John Balsam Dugger, Written by His Father (1938). His reputation is based on his delightfully wild and uninhibited use of the English language, as here: "My darlin' Mihilda, Mahulday, Mahighla Jane, if you'll allow me to implant upon your cavernous mouth some faint evidence of my inconsiderable ability as an osculatory artist, I'll cure your toothache."

Leslie B. Cottingham and Carol L. Timblin, The Bard of Ottaray: The Life, Letters and Documents of Shepherd Monroe Dugger (1979).

"Shepherd M. Dugger." The balsam groves of the Grandfather mountain : a tale of the western North Carolina mountains : together with information relating to the section and its hotels, also a table showing the height of important mountains, etc. Banner Elk [N.C.] : S.M. Dugger. 1892. Frontispiece. https://archive.org/stream/balsamgrovesofgr00dugg#page/n5/mode/2up (accessed October 18, 2013).