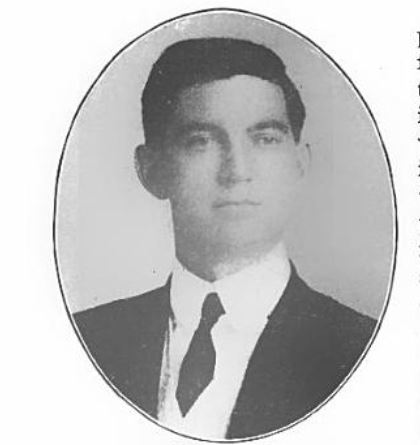 Marcus Baxter Dry, teacher and school administrator, whose career spanned over half a century, was born on a farm in Union County, the eldest of twelve children of Henry and Jane Alice Parker Dry. The family lineage was German and originally the name was Derr. Settlers came first to Pennsylvania and descendants migrated south to Cabarrus County as early as 1754. Dry's father engaged in farming and sawmilling until 1893, when he sold his interests in Union County and, with the exception of Marcus and one daughter, moved the entire family to Texas. Young Dry, who was graduated from Union Institute at the age of seventeen, began his teaching career in a clay-chinked, one-room log school-house. After six years of teaching he had acquired enough money in 1893 to enter Wake Forest College where he received the master of arts degree, with valedictorian honors, in 1896. He distinguished himself in the classics, was a member of the Euzelian Literary Society, class poet, and an editor of and frequent contributor to the literary magazine, The Wake Forest Student.

In 1896 a new school, named Wingate in honor of former President Washington Manly Wingate of Wake Forest, was established by the Union Baptist Association. Dry was employed as the first principal. Under his guidance in the next twelve years it developed into one of the most successful boarding schools in the area and is now Wingate College. From 1905 to 1908 he also edited and published a monthly newspaper, The Baptist Messenger.

In 1907 North Carolina endeavored to create a new system of public high schools by offering state funds to local schools. The Cary school in Wake County, a private institution since 1870, became on 6 Apr. 1907 the state's first public high school under the new law. In 1908 Marcus Dry became principal and, drawing patronage from a wide area, soon made it one of the leading boarding schools in the state. In 1913–14 a new brick building was erected, the first of six plant additions, which immediately became an architectural model for other schools across the state. Dry pioneered in curriculum development and sought to make the school a working partner with the rural community. In 1913 he established a Farm-Life department, offering agriculture and home economics. He also pioneered in vocational training for mentally handicapped children. His "Betterment Association," forerunner of the Parent-Teacher Association, enabled him to provide hot lunches for children. A student council was instituted in 1919, followed by public school music and band in 1922, a commercial department in 1924, physical education (establishing the first rural high school gymnasium in the state) in 1925, and a teacher training department sponsored by the state Department of Education in 1922–28. Indeed, because of its progressive programs, its proximity to Raleigh, the capital, and its support by state educational agencies, Dry's school became a model for the development of North Carolina's public school system in the 1920s. Younger principals consulted him on the qualities of good principalship.

Between 1918 and 1923 Dry took an active part in promoting both the movement for school consolidation and bond issues to sustain the movement. In 1927 five other schools were consolidated with Cary and the M. B. Dry Building was constructed to accommodate them. Dry also played a leading role in the work of the North Carolina Education Association and was a member of the first state Textbook Commission. During the summer he pursued graduate study at Columbia University and elsewhere and subsequently conducted teacher institutes for the state Department of Education. In 1939 a new brick building replaced the 1913 building on the same site; at its dedication the state superintendent of public instruction noted that "Dry is the only principal in North Carolina who has worn out a schoolhouse." He retired as principal in 1942 but continued teaching until 1944.

Dry was over six feet tall, with dark eyes and hair, somewhat formal in manner and dress, but naturally genial and kind, possessing all the equanimity, patience, and dedication required of a good teacher. He was highly regarded by his students, many of whom went on to successful careers as college educators, business, and professional leaders. A bronze plaque commemorating his leadership was presented to the Cary school at a memorial service on 18 May 1947 and a portrait by Mabel Pugh hangs in the school building. In 1964 the Dry Memorial Chapel, contributed by his former Wingate students, was dedicated at Wingate College where another portrait hangs in the trustee room.

Dry was a dedicated member of the Cary Baptist Church and for over thirty years taught the Men's Bible Class, also named for him. In 1930, as a token of their affection, his school and Sunday school students gave him a trip to the Holy Land which included visits to thirteen European countries. Throughout his life he was regarded as "the first citizen" of Cary.

In 1904 Dry married Wilma Annie Perry, daughter of William Marion Perry, one of the founders of the Wingate school; they had three children, Helen, William, and Hallie. His grave is in Cary, not far from the school he served so long and so well.