Parent-Teacher Associations in North Carolina were an outgrowth of the National Congress of Parents and Teachers, 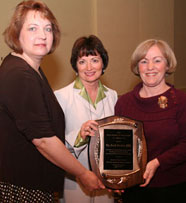 organized in Washington, D.C., on 17 Feb. 1897 as the National Congress of Mothers. Later broadened to include fathers, teachers, and others, this organization promoted the educational, social, and economic well-being of children. In 1902 citizens meeting in Greensboro formed the Woman's Association for the Betterment of Public Schoolhouses and Grounds. Later, some local units of the Parent-Teacher Association (PTA) in the state grew out of local branches of this association.

Dedicated to giving children opportunities for physical, mental, moral, and spiritual growth, the North Carolina Congress of Parents and Teachers organized local groups into districts, held annual meetings, published the Parent-Teachers Association Bulletin beginning in 1922, sponsored regional workshops, and, in 1923, hired its first field secretary, Catherine Albertson of Elizabeth City. The state organization also tried to influence legislation that would benefit public education and child welfare. A Summer Round-up, begun in 1926, grew out of a desire to ensure that children were healthy at the beginning of each school year. The first of many summer institutes was held in 1928 to teach the fundamentals of PTA work. The University of North Carolina Extension Division cooperated with the congress by publishing several editions of a Parent-Teacher Handbook for North Carolina. By 1930 more than 22,000 men and women from 361 units belonged to the organization.

Meanwhile, African Americans had become involved in PTA work. The General Assembly in 1921 authorized the Negro Division of the Department of Public Instruction. During the 1923-24 school year, following her appointment as supervisor of elementary education within this division, Annie Wealthy Holland began organizing local parent-teacher associations. On 2 Apr. 1927, a year after a national parent-teacher organization for African Americans had been founded, local representatives called to Shaw University by Holland formed the North Carolina Congress of Colored Parents and Teachers, with Holland as president. Organized in much the same way as its counterpart for whites, the North Carolina Congress of Colored Parents and Teachers worked to improve school attendance, promote the health of children, and lengthen the school year. Local units raised money to purchase land for schools, to beautify school grounds, and to acquire musical instruments and other equipment. By the early 1930s, more than 20,000 members participated in approximately 1,000 local units organized within four districts. Later that decade, the organization began publishing its newsletter

Responding to changing economic, educational, and social conditions, both organizations continued to work within their respective national organizations to improve public schools and the lives of schoolchildren. During the 1950s and 1960s the North Carolina Congress of Parents and Teachers employed radio and television advertising to further its goals. Its growing membership, which in 1960 stood at around 373,000, led to the completion that year of a headquarters building in Raleigh. Among other activities, the North Carolina Congress of Colored Parents and Teachers held annual summer camps for children and workshops for adults in Franklinton.

The two organizations merged in 1969 to become the North Carolina Congress of Parents and Teachers, known also as the North Carolina PTA. Subsequently the organization addressed such issues as early childhood education, day care, vocational education, sex education, drug and alcohol abuse, AIDS, school violence, and online pornography. The group does not seek to direct the administrative activities of the schools. In a growing number of middle and high schools, the local groups are called Parent-Teacher-Student Associations (PTSAs), as students are given a role that has included helping develop new methods of instruction and pushing for more minority participation in school activities.

The NC PTA was presented the NCAE Friend of Education Award at the 2010 NCAE Conference in Winston-Salem. Image available online from NC PTA. Available from http://www.ncpta.org/parent/Educators.html (accessed September 19, 2012).