Annie Wealthy Holland, educator, was born in Isle of Wight County, Va., on a plot of land contiguous to the Wealthy plantation, where her grandmother had been a slave. She was 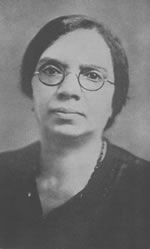 the daughter of John Daughtry and Margaret Hill, a surname she received at her baptism a year before her marriage. Mrs. Holland was named after Annie Wealthy, mistress of the Wealthy plantation.

At age sixteen, Annie completed her studies at the Isle of Wight county school. Afterwards her grandfather, Friday Daughtry, sent her to Hampton Institute, but his health failed and she never earned a diploma. She worked in New York City for a year as a nurse and later as a dressmaker, then returned home and earned a certificate to teach the second grade. In 1888 she married Willis B. Holland, an 1884 graduate of Hampton Institute who also became a teacher.

The records of Mrs. Holland's early career are sparse. In 1897, after teaching for nine years, she became assistant to her husband, then a school principal. In 1899, by choice, she left to teach in a rural school ten miles from her home, but returned to succeed her husband as principal in 1905. Around 1911 Mrs. Holland became a teaching supervisor in North Carolina for the Jeanes Fund, a private trust founded to promote rural Negro education. She served first in Gates County, N.C., then in Chesapeake and Reynoldson counties, Va.

In 1915 Mrs. Holland became the Jeanes Fund's state demonstration agent for North Carolina, which effectively made her the state supervisor of Negro elementary schools. This position was funded by the Jeanes Fund and the North Carolina Colored Teachers Association until it was incorporated into the state educational organization in 1921. Mrs. Holland's post was not administrative, but rather involved constant travel to all North Carolina counties to conduct meetings, organize fund drives, and teach demonstration classes in every subject from reading to nutrition and sewing. Her itinerary for the month of April 1917, documented in a letter from State Supervisor N. C. Newbold, required her to visit 21 counties in 35 days, with 10 of those days in the vicinity of her home in Franklin, Va. Newbold further advised her to omit a stop if she found her schedule so tight that she had to travel at night.

Mrs. Holland is best known as the founder of the first Negro parent-teacher association in North Carolina, which held its first meeting at Shaw University on 14 Apr. 1928.

Her husband, Willis, died in Franklin, Va., in 1925. She died nine years later, during a speaking engagement, and was buried in Franklin. In 1938, on the tenth anniversary of the founding of the North Carolina Congress of Colored Parents and Teachers, the exercises of the annual meeting included the planting of a tree at Shaw University in Mrs. Holland's memory.

Records of the Jeanes Fund and of the State Division of Negro Education (North Carolina State Archives, Raleigh)