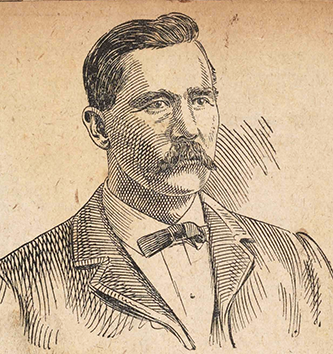 Elijah Longstreet Daughtridge, farmer, merchant, and politician, was born in Edgecombe County near Rocky Mount, the fourth of seven children (five girls and two boys) born to William M. and Dellah Williford Daughtridge. He attended the Bingham School in Mebane during 1881 and 1882, thereafter returning home to engage in farming with his father. Although farming remained a priority throughout his life, he was also an active merchant. He was the principal owner and director of Daughtridge Supply Company, president of Planters Cotton Oil and Fertilizer Company, and a director in other corporate organizations.

After serving as lieutenant and captain in a local military company from 1896 to 1897, Daughtridge became active in politics. Beginning in 1898, when he was a member of the Township 12 Committee (Edgecombe County), Daughtridge served two years as an alderman and vice-recorder of Rocky Mount. In February 1900 he was one of eleven delegates recommended by the Edgecombe County convention for the Democratic state convention; in November of that year he was elected, along with Benjamin Shelton, to the state house of representatives. As a member of the 1901 and 1903 legislatures, he was chairman of the Agriculture Committee and served on both the Finance and Penal Institutions committees. He was also a member of the State Board of Agriculture and the board of trustees of A & M College during a portion of his legislative tenure.

During the next ten years, Daughtridge served in several organizations. In 1906 he was president of the State Fair Association and was the first to carry over a surplus for that organization. He also acted as treasurer for both the North Carolina Jamestown Commission in 1907 and the Rocky Mount Road Commission from 1907 to 1913.

Daughtridge's greatest political achievement, however, was his election as lieutenant governor of North Carolina in 1912. Running as a Democrat, he defeated Republican James R. Gaskill (also of Edgecombe County) in the general election as Locke Craig swept the gubernatorial election. In his opening speech to the state senate, Lieutenant Governor Daughtridge stressed the investment of money for the practical education of farm children as a primary directive for the new General Assembly. His policy also called for equalizing the tax burden, building better roads, improving rural conditions, and erecting a residential institution for veterans' widows. While lieutenant governor, he served as vice-president of the North Carolina Good Roads Association and as a member of the Committee on Constitutional Amendments. In addition, he was appointed by Governor Craig to the American Commission, which toured Europe in 1913 to study banking and agricultural conditions. Upon his return he became one of the leading proponents, along with John Sprunt Hill, of "rural credits" in the South and lectured and wrote extensively on the commission's findings. He was later elected a director of the Southern Commercial Congress.

In 1916 Daughtridge entered the Democratic primary for the governorship against Thomas Bickett, attorney general during the Craig administration. Labeled by his followers as a Conservative, Daughtridge battled Bickett in a campaign of historical significance—this was the first statewide primary held in North Carolina. In the June Democratic primary, Bickett garnered 63,121 votes to 34,017 for Daughtridge. Of the sixteen counties that Daughtridge won, nearly half were in the far western corner of the state, with the others spread out over eastern North Carolina. His term as lieutenant governor ended on 11 Jan. 1917.

Daughtridge married Mary W. Odom in 1883 and they became the parents of five sons—John, William, Henry, Edward, and Archie—and two daughters—Annie (m. Millard Jones) and Mary. He was a member of the Elk's Lodge of Rocky Mount, a Pythian, president of Post H of the Traveler's Protection Association, and a Methodist. He died at his home in Rocky Mount and was buried in Pineview Cemetery.

Daughtridge for Governor of North Carolina (1916).