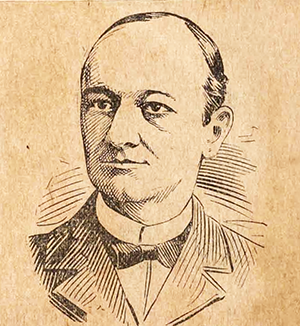 Frank Arthur Daniels, jurist, was born in Washington, N.C., the eldest son of Josephus and Mary Cleaves Seabrook Daniels, both of families of English descent long settled in eastern North Carolina. With the coming of the Civil War, Josephus Daniels, a Whig and Union man who did not believe in slavery or secession, remained a noncombatant but worked as a skilled carpenter in the Confederate shipyards in Wilmington. Later he moved to New Bern and sent his family as refugees from the Union-occupied area to Ocracoke Island. In early January 1865, while on a mission of relief to old friends in Washington, N.C., he was wounded when a small group of Georgia troops fired on the noncombatant vessel on which he was traveling. He died in New Bern on 28 Jan. 1865.

Frank Daniels and two younger brothers, Josephus and Charles Cleaves, were reared in the Methodist tradition of the family by a strong Christian mother who supported her boys as a milliner and as postmistress in Wilson. Frank was educated in the Wilson Collegiate Institute, at The University of North Carolina (1878–79), and at the law school of Judges Robert P. Dick and John H. Dillard in Greensboro (1880). He was licensed as an attorney in the spring of 1881. In January 1882 he began to practice with Charles Brantley Aycock in Goldsboro; the partnership continued until Aycock, after serving as governor, moved to Raleigh in 1909. Daniels served in Democratic party councils and in 1899 and 1900 in the state senate. In 1910 he was unanimously nominated for judgeship of the superior court for his district, then composed of Wayne, Johnston, Wake, and Harnett counties. Elected in November 1910, he was twice reelected and served for twenty-four years. In 1934, at the age of seventy-five, he declined to seek reelection and retired to the emergency bench. 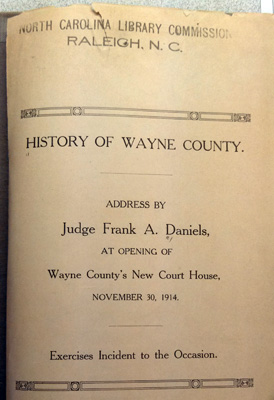 A man of austere countenance whose slim features often broke into a smile, he had stern views about justice but added warmth and humor to mercy. He held court under the system then prevailing in practically every county of the state. He was welcomed as a "Southerner of the old school" in all of them. As judge and citizen he was regarded as a dyspeptic optimist. On the bench he was sometimes tart about "conflicting decisions and poorly considered legislation." Lawyers and court officials in every county regarded him with veneration and accepted with amusement his complaints about drafts in the courtrooms and the indigestibility of food available in the county seats. The convivial Charles Aycock joked that, while Frank never joined in the social drinking of bench and bar, he amassed an array of patent medicines of high alcoholic content. In his day he was certainly the state's favorite hypochondriac, attaining, despite a life of uninterrupted fragility, the age of eighty-one.

In 1885 Daniels married Carrie Whitfield Borden of Goldsboro. Their children were Frank Borden Daniels, George Seabrook Daniels, and Mary Cleaves Daniels (m. Henry M. Stenhouse). The first Mrs. Daniels died in 1906; in 1920 he married her sister, Mary Carrow Borden, who died in 1937. The judge was buried in Willow Dale Cemetery, Goldsboro. In 1940 a portrait of Judge Daniels was unveiled in the Wayne County Superior Court in Goldsboro.

Ooops! Pardon my mistake in

Ooops! Pardon my mistake in the comment I sent moments ago. This article about Frank Arthur Daniels must be about Josephus Daniel's UNCLE, not his father, as I first surmised. As I noted earlier, the link to it appears in your article about the Josephus Daniels born in 1862, a link that purports to take the reader to a piece about his son, Frank Arthur, born in 1904. Puzzled about why of all of this Josephus's sons, including the well-known Jonathan Daniels (ostensibly the author of this article!), there was a link to Frank Arthur, I clicked on it, only to find this one, which I too hastily concluded was Josephus's father; it is undoubtedly about his father's brother (again, not about his son). Please correct, if possible.

Thanks for visiting NCpedia. I will forward your request to our NCpedia team.

Please note that this article

Please note that this article deals with Josephus Daniel's father, not with his son (a link to this article appears in the article about Josephus Daniels [https://www.ncpedia.org/biography/daniels-josephus-dncb] at a point naming his sons). Please correct, if possible.

Thanks for visiting NCpedia. I will forward your request to our NCpedia team.