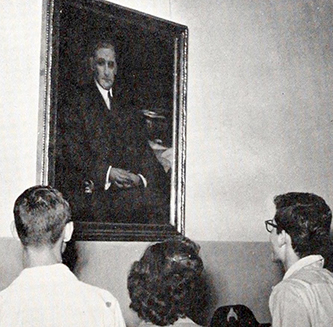 Charles Lee Coon, educator and reformer, was born on a farm four miles west of Lincolnton, the first of nine children of Frances E. Hovis Coon (1842–1907) and David A. Coon (1834–1921). He was a descendant of Revolutionary and Civil War veterans and an inheritor of a rich Germanic culture (the family surname was originally spelled Kuhn). His father had risen to the rank of first lieutenant in the Confederate Army and on the third day of the Battle of Gettysburg had been wounded nine times, left for dead, captured, and then imprisoned until the war's end. A respected leader in his community, David Coon served as an elder of Daniel's Evangelical Lutheran Church and as a member of the Lincoln County Board of Education.

As with his father, church and school were important forces in the life of young Charles Coon. A lifelong Lutheran, he joined Daniel's Evangelical Lutheran Church at age twelve, and his religious training influenced his views and rhetoric for the rest of his life. He attended the one-room school that met in Daniel's Church for ten years and then obtained additional education in the late 1880s at Concordia College in Conover, a coeducational college supported by the Lutheran church. While a student at Concordia, Coon spent a part of each year teaching in nearby rural public schools, and after graduation he became principal of Denver Academy in Lincoln County. He quickly earned recognition as a successful teacher and school organizer. In 1891 he returned to Concordia College as a teacher of English, history, and mathematics; before leaving Conover in the spring of 1896, he served as the town's mayor and began his editorship of the Lincoln Democrat, a four-page, weekly newspaper dedicated to the principles of the Democratic party. Coon published the paper from 27 Sept. 1895 until 1 Oct. 1896, gaining journalistic training, increased writing skill, and useful techniques for influencing public opinion.

After leaving the staff of Concordia College, Coon taught one year at Piedmont Seminary in Lincolnton and then was employed in 1897 by the Charlotte graded schools. Although he was becoming well known as a proficient teacher and a qualified conductor of teaching institutes, he was dismissed from his Charlotte job at the end of 1898 because he failed to conform to formalistic school practices. From November 1896 to June 1899, while his teaching career was in a state of flux, he supplemented his income by writing for the Charlotte Observer. Through numerous articles under the pseudonym "Teacher," he set forth his educational creed and his views on current school problems. By the end of the nineteenth century he had emerged as an active and well-informed educational critic and an avid campaigner for public school support. When The University of North Carolina's state funds were threatened by a denominational anti-state aid movement in 1896 and 1897, he championed the state university as the capstone of the public education system. In response to the 1897 legislative authorization of matching state funds for localities levying supplementary school taxes, Coon cooperated with State Normal President Charles D. McIver and State Superintendent of Public Instruction Charles H. Mebane in an unsuccessful attempt to create sentiment for district school taxation.

In June 1899, Coon was appointed superintendent of the Salisbury graded school system. During his term as superintendent, he reorganized the school administration, drew up a new course of study, sought out qualified teachers, tightened student discipline, and organized a school building program; as a result of his efforts, school enrollment rose, the term became longer, more diverse subjects were offered, and a high school level of education became available. Most importantly, Coon changed public attitudes and built up popular support for the public school system. In addition to his work in Salisbury, he took part in a state-wide movement to create public support for better schools. In February 1902, at the behest of Charles D. McIver and Governor Charles B. Aycock, a conference of state educational leaders met in Raleigh to rededicate themselves to the drive for universal education. Coon attended the meeting and was author of its educational manifesto, the "Declaration against Illiteracy." Described by historian R. D. W. Connor as "one of the most important documents in the history of education in the South," the declaration was widely circulated as the birth announcement of North Carolina's educational awakening.

In February 1903, Coon left his state to carry the fight for universal education to the rest of the South. He moved to Knoxville, Tenn., to become secretary and editor of the Bureau of Investigation and Information of the Southern Education Board. He served the board as chief propagandist, statistician, campaign organizer, and editor of its bulletin, Southern Education, which covered a broad range of educational topics and was frequently cited by the press. After the functions of his bureau were transferred North, Coon spent four months establishing a model rural school (Farragut School) near Concord, Tenn. He then returned to North Carolina and in July 1904 was appointed the first superintendent of Negro normal schools by State Superintendent of Public Instruction James Yadkin Joyner. For more than two years, Coon endeavored to upgrade the training of black teachers by revising the normal curriculum and consolidating school facilities. Then, from January to July 1907, he served as Joyner's chief clerk, devising new forms for school records and reports and compiling the first complete index to public school law. During his stay in Raleigh, Coon took part in the organization of the North Carolina Child Labor Committee and became its first secretary. For ten years he was active in the organization, fighting the arguments of the mill interests, supporting cooperation with the National Child Labor Committee, and organizing campaigns for needed state child labor legislation.

As a constructive critic of the established educational order of the early twentieth century, Coon presented teachers, legislators, and the public with a definite program of school reform. His fundamental goals were clarification of state and local educational responsibilities, a uniform system of school administration, larger units of local administration, an equitable system of local financial support, elimination of politics from school affairs, a respected and influential teaching profession, expertise in educational techniques, and professionally chosen textbooks. Coon insisted that teachers were both the core of the educational problem and potentially the chief element in its solution; he sought the creation of an organized profession with high academic and ethical standards. He was active in the North Carolina Teachers' Assembly, serving on committees on professional ethics and the history of education. In an address as outgoing president of the assembly in November 1911, he called for an end to haphazard, confused, inefficient school measures and for the creation of a well-defined and unified state school program. The address, entitled "The Need of a Constructive Educational Policy for North Carolina," became Coon's best-known and most debated denunciation of the state's education failings.

In the years following his 1911 address, Coon was involved in numerous legislative battles. He helped secure a special school for the retarded, Caswell Training School, and was active in campaigns for a strong compulsory attendance law and concomitant child labor regulations, for improved methods of teacher certification, and for longer school terms.

In addition to his influence on state school law, Coon created a modern consolidated school system at the county level that set a pattern for the rest of North Carolina. In his capacity as Wilson city school superintendent (1907–27) and Wilson County superintendent (1913–27), he implemented a forward-looking program aimed at equalizing educational opportunities for urban and rural school children. His administration of the Wilson city schools brought higher quality teaching, a rise in teacher salaries, better student discipline, a growth in attendance, a broader course of study, increased local financial support, and more school buildings. The crowning achievement of his building program was a modern high school, which fittingly received his name in 1928 and his portrait in 1929. As county superintendent, he developed one of the earliest county-wide consolidated school systems in the state. He increased local financing through a county school tax and built central schools to which students were transported by county-owned buses. His conslidation plan resulted in the abolition of all one-room white schools and earned him local admiration as Wilson County's "father of education." School progress in Wilson County gained him recognition as the educational pacesetter for the rest of the state.

Black students in Wilson County received benefits from consolidation—new buildings, higher paid teachers, their own black school supervisor—but Coon's plans for improvement of black schools were still uncompleted at his death. During his lifetime, he served the cause of black education as propagandist, statistician, opponent of racial division of school funds, and proponent of increased opportunities. In his own state and elsewhere, he became known as a courageous spokesman for black education. His most notable speech was delivered in Atlanta in 1909 before the Twelfth Annual Conference for Education in the South. Entitled "Public Taxation and Negro Schools," the address stirred up controversy with statistics showing that black public schools were no "burden" for white taxpayers in North Carolina, Virginia, or Georgia. Misinterpretations of the address led to criticism of Coon in the News and Observer, to which friends responded with a defense of his right to free speech. According to participant and historian R. D. W. Connor, the Atlanta speech controversy helped widen the bounds of intellectual freedom in North Carolina.

Coon died after a two-day illness and was buried in the Wilson cemetery.