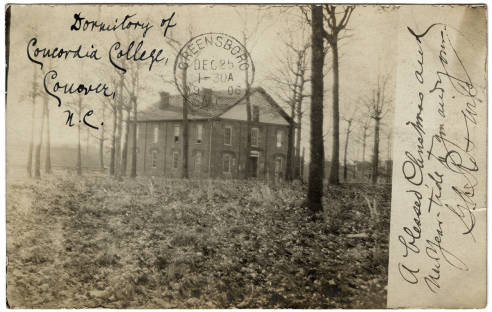 Concordia College was established in Conover in 1877 as Concordia High School by the Lutherans of the Tennessee Synod. It was converted into a college in 1881. The college began as a ministerial training school, although by 1919 it also offered programs in French, "mental science," "moral science," and pedagogy. The Depression years brought a gradual decline in enrollment, which had peaked at slightly over 100. On 16 Apr. 1935 the school's administration building burned, and later that year the Lutheran Church voted to close the college.

A timeline of North Carolina colleges and universities, 1865–1900. ANCHOR. https://www.ncpedia.org/anchor/timeline-north-carolina