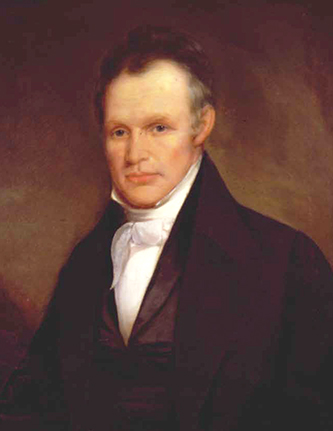 Newton Cannon, military officer, congressman, and governor of Tennessee, was born in Guilford County, the son of Minos and Letitia Thompson Cannon. His father was a revolutionary soldier, and his grandfather, Richard Thompson, was said to have been the first man to fall at the Battle of Alamance in 1771. Cannon was educated in local schools and learned the saddler's trade. With his parents, brothers, and sisters, he moved to the frontier settlement in the Cumberland Valley of present Tennessee after the Revolution; the family returned to North Carolina until late in 1790 but then went back to Tennessee. In the Guilford County returns of the 1790 census, Minas [sic ] Cannon's name appears.

Although Cannon's education was limited, he was a clerk, a merchant, a surveyor, and in time a wealthy planter of Williamson County, Tenn. He served briefly in the Creek War as colonel of a regiment of mounted volunteers. He served in the Tennessee Senate in 1811 and 1812 and again from 1829 to 1831. As a colonel of Tennessee Mounted Rifles during the War of 1812, he commanded the left column in the Battle of Tallushatchee on 3 Nov. 1813. He ran for Congress in 1810 but was overwhelmingly defeated by Felix Grundy; when Grundy resigned in 1814, Cannon was elected to succeed him. Except for one term, Cannon then served in Congress until 1823. He was a candidate for governor in 1827 but was defeated by Sam Houston. He served as an active member of the state constitutional convention in 1834 and in 1835 was elected the first Whig governor of Tennessee, serving until 1839, when he was defeated by James K. Polk. His administrations were characterized by considerable progress in state banking and internal improvements.

Cannon was married on 26 Aug. 1813 to Leah Pryor Perkins, who died three years later. On 27 Aug. 1818 he married Rachel Starnes Wellborn, eldest daughter of General James Wellborn of Wilkes County. Cannon was the father of eleven children. He was buried in the family cemetery on his estate near Allison, Williamson County, Tenn.