Farquhard Campbell, legislator and soldier, was born in Scotland. Facts concerning his parentage, place of origin, and the exact date of his emigration to North Carolina are not known and are further obscured by numerous romantic traditions that have circulated among his descendants for several generations. Cumberland County court minutes provide the first documentary evidence of his presence in the colony: his appointment in July 1756 as a justice of the peace for the county indicates that he was by that time already well established or well connected. The unfortunate destruction by fire of Bladen County records precludes the possibility of pinpointing more precisely his first appearance in the area; he was in the part of Bladen that became Cumberland in 1754.

In May 1761, Campbell was appointed surveyor for the county; he laid out the town of Campbellton, chartered the following year and presumably named for him, and later served as a commissioner of the town. In 1764 he was elected to the General Assembly as a representative from Cumberland, a post he held at every session until 1775. During the War of the Regulation he was appointed a captain by Governor William Tryon in 1771 and commissioned to raise a company of 150 men from Cumberland, Bladen, and Anson counties. Whether this company took an active part in the campaign is not shown in the records.

As events moved inexorably toward the Revolution, Campbell at first appeared to espouse the cause of liberty. As early as 1770 he was chosen by the Sons of Liberty as a member of a committee of thirty of the most prominent men of the Cape Fear, who were to consult upon such measures as would best evince their "patriotism and loyalty" to the common cause. On 20 July 1775 he was a member of the Wilmington District Committee of Safety, but by the fall of that year evidence of his equivocation had begun to surface and on 4 Sept. 1775, the provincial congress felt called upon to pass a resolution of confidence in his integrity. On 16 Oct. and 12 Nov. the royal governor, Josiah Martin, wrote Lord Dartmouth, the colonial secretary, lamenting "the inconsistency of Farquhard Campbell's conduct" but expressing confidence that he could reconcile their interests when able to meet with him.

From this correspondence and other records of the period, it is evident that Campbell was a man of superior consequence, both as a leader in the community and as a man of property. This latter condition no doubt inclined him to a conservative position on the question of revolution. That he, along with other Scottish immigrants, had lately arrived from the direct jurisdiction of the Crown, in contrast to the many colonists who were third or even fourth generation Americans, may be a further explanation of what can be characterized as his duplicity.

Whatever the explanation, his efforts at fence-straddling were unsuccessful. After the Battle of Moore's Creek on 27 Feb. 1776, he was taken prisoner, and the provincial congress on 20 Apr. 1776 found him guilty of assisting the enemy. Congress, fearing the personal and family influence of Campbell and other prisoners, removed them in the interests of public safety. They were accordingly sent to Philadelphia, later transferred to Baltimore, and thence sent to Fredericktown. On 3 Mar. 1777, Campbell wrote Governor Richard Caswell, requesting parole to North Carolina, and offering to mortgage his property as security for his good behavior. Parole was granted on 12 Apr. 1778.

Soon after the close of the Revolution, Campbell reestablished himself politically. He was a member of the state senate from 1785 to 1793. The senate on 11 Dec. 1790 passed a resolution to the effect that his wartime behavior was justifiable and that since he had subsequently comported himself as "a friend to the United States," he would be "entitled to all the privileges and immunities that all other good citizens of this State are entitled to."

Campbell was married three times: first to Isabella McAlester, sister of Colonel Alexander McAlester, by whom he had five daughters; second to Elizabeth Whitfield Smith, widow of Alexander Smith, by whom he had three sons; and third to Rachel whose maiden name is unknown, who survived him but had no issue. He was supposedly buried on his home plantation, across the Cape Fear River from Old Bluff Presbyterian Church, of which he was one of the founders in 1758. A monument to him and his son Robert was erected in the churchyard at a later date. 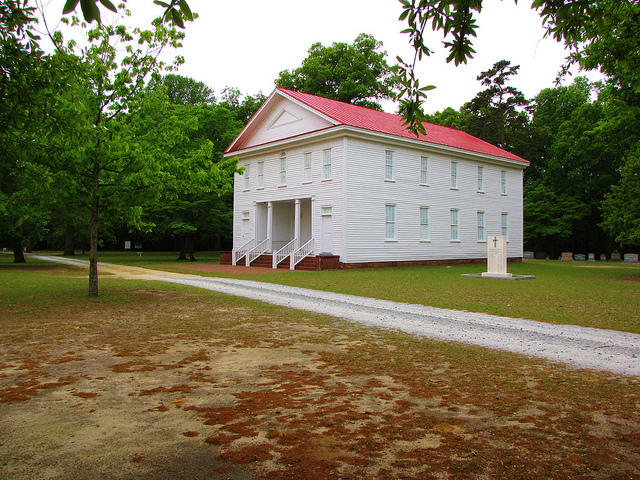 MacLean, J. P. An historical account of the settlements of Scotch Highlanders in America prior to the peace of 1783 : together with notices of Highland regiments and biographical sketches. Cleveland, Ohio : Helman-Taylor Co. 1900. 119-121. https://archive.org/stream/historicalaccoun00macl#page/118/mode/2up (accessed November 19, 2013).

One could certainly derive

One could certainly derive dates from the building of his two homes, from his marriage to Isabella, and from the birth of his and Isabella's children. Also from his service as elder at Bluff Presbyterian Church--even from Bill Fields' own records, I would assume.