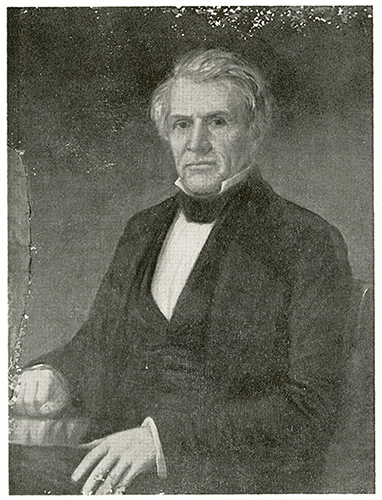 Edward Travis Brodnax, physician and state legislator, was born in Brunswick County, Va., the son of William Edward Brodnax, a leading planter and horseman of Brunswick County, and Sally Jones Brodnax. In 1811, William Brodnax purchased a large plantation in Rockingham County. Subsequently, two of his sons, Robert and Edward Travis, moved to the county and established the Brodnax family as a dominant influence on the antebellum economy and society of the area. During the War of 1812, Brodnax served as a private in the Brunswick County militia, which was ordered to aid in the defense of Norfolk. Following the war he attended the University of Pennsylvania, graduating with an M.D. degree in 1818. By 1820 he had settled in Rockingham County on Sauratown Plantation, south of the Dan River. Within several decades his vast fortune included over a thousand acres of land, a gristmill, and a partnership in a store in Leaksville; his slaves increased from 41 in 1820 to 174 by 1860, at which time he was the largest slaveholder in the county.

Although engaged in the management of his extensive plantation and in the practice of medicine, Brodnax pursued a public career that involved service in politics, in higher education, and in his church. An early advocate of state development of the transportation system, he was appointed to the standing committee on internal improvements in his two terms in the House of Commons, 1822–23. During his terms in the state senate, 1827–28, he was appointed to select committees on internal improvements, tariff alteration, the formation of Cherokee County, and the South Carolina Nullification proposal. Brodnax attended the Internal Improvements conventions in Raleigh in 1833 and 1836. After the formation of the Whig party, he became an influential Whig leader in his county.

Brodnax was one of only five delegates to attend both the 1835 and the 1861 state constitutional conventions. In the 1835 convention he served on the committee to draft the amendment that excluded free blacks from voting. To the 1861 convention he was elected as a moderate Unionist. Although not a proponent of secession, when he realized that the majority in his county favored secession, he voted for it. Dr. Brodnax was on the original board of trustees of Greensboro Female College, founded in 1838, and he remained on the board until 1851. In 1844 he was an organizer and one of the first vestrymen of the Church of the Epiphany in Leaksville, the first Episcopal church organized in the county.

Brodnax married Janet Hamilton Chalmers (19 May 1809–11 Nov. 1846). They had no surviving children, but they adopted Mrs. Brodnax's orphaned nephew, Chalmers Lanier Glenn. Glenn, an attorney, and his wife, Annie Dodge, the daughter of James R. Dodge, lived at Sauratown Plantation with their three sons, James Dodge, Robert Brodnax, and Edward Travis Brodnax. After Glenn was killed in the Civil War, Dr. Brodnax adopted and educated the Glenn children. Robert B. Glenn became governor of North Carolina (1905–9), and James D. Glenn served as adjutant general of the state.

Privately owned portraits of Dr. and Mrs. Brodnax are illustrated in the North Carolina Portrait Index.

Church of the Epiphany Records (Eden).