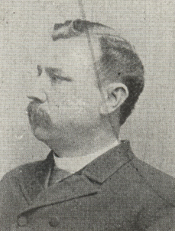 William Augustus Blount Branch, Confederate soldier, planter, and congressman, was born in Tallahassee, Fla., the son of General Lawrence O'Bryan Branch, C.S.A., and Nancy Haywood Blount. His father, a North Carolinian, was practicing law in Florida at the time. Branch was educated at Lovejoy's Academy in Raleigh, Bingham Military Academy near Mebane, The University of North Carolina, and Virginia Military Institute at Lexington.

Branch joined the Confederate Army as a courier on the staff of General R. F. Hoke, and surrendered with General Joseph E. Johnston's army in 1865. He studied law but never practiced. In 1867 he took charge of his landed estate in Beaufort County and engaged in agricultural pursuits for the rest of his life.

Branch was elected as a Democrat to the Fifty-second and Fifty-third Congresses and served from 4 Mar. 1891 to 3 Mar. 1895. He was a member of the North Carolina House of Representatives in 1896.

Branch died in Washington, N.C., and was buried there.

The early history of Raleigh, the capital city of North Carolina: A centennial address delivered by invitation of the Committee on the centennial celebration of the foundation of the city, October 18, 1892, Volume 1, Issue 1. Edwards and Broughton, printers, 1893. http://books.google.com/books?id=DXEtAAAAYAAJ&dq=william+augustus+blount+branch&source=gbs_navlinks_s&printsec=frontcover#v=onepage&q&f=false (accessed April 16, 2013).