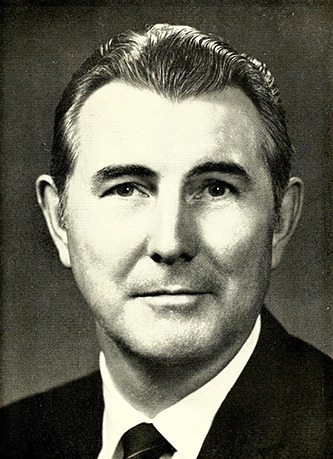 Douglas McKinley Branch, Baptist minister and general secretary-treasurer of the North Carolina Baptist State Convention, was born in the Mount Moriah community of Wake County and was the son of Atlas M. and Nora Branch. His primary education was obtained at Mount Auburn and Garner schools. He entered Wake Forest College in the spring of 1934, and in the fall of 1935 his home church, Mount Moriah, Wake County, ordained him to the full gospel ministry. While a student at Wake Forest College, he served Youngsville, Bethlehem, and Bethel Baptist churches in Wake and Franklin counties. He was graduated from Wake Forest College cum laude in 1937.

Branch was pastor of Cary Baptist Church from 1939 until 1941. During this time he served a term as moderator of the Raleigh Baptist Association and attended Duke Divinity School. He was then appointed a general missionary for the Piedmont area of North Carolina. He served in this capacity from 1941 to 1943, working under the State Mission Board of the North Carolina Baptist State Convention. He then resigned to pursue further studies at the Southern Baptist Theological Seminary, Louisville, Ky., in 1943–45; he supplemented this study with summer attendance at the Presbyterian Seminary, Louisville, Ky.

Following the completion of three full years, Branch accepted the call to become pastor of the Scotland Neck Baptist Church and returned to North Carolina in 1945. From 1947 to 1953 he was pastor of the First Baptist Church, Kannapolis. In this position, within one of the most industrialized communities in North Carolina, he had the opportunity to become acquainted with the Piedmont area of the state. In 1953, after a successful pastorate in Kannapolis, during which time he served as moderator of the Cabarrus Baptist Association (1949–50), he was extended a call to become pastor of the First Baptist Church of Rocky Mount. While there he also served as moderator of the North Roanoke Baptist Association.

In 1949 Branch was appointed to and served on a committee to prepare a nine-year program of advance for North Carolina Baptists. The pastors of North Carolina called upon him in 1950 to serve as the president of their conference, and he was a member of the Committee on Committees of the Baptist State Convention for one year. In 1952 he was elected the first vice-president of the Baptist State Convention; and when the convention president, Archie Ellis, moved from North Carolina, it became Branch's responsibility to preside. Subsequently, he was elected and twice served as the president of the convention in his own right (1953–54). When North Carolina Baptists decided to make a thorough study of the total organized life of the convention, Branch was a member of the "Committee of 25." He served for five years on the executive committee of the Southern Baptist Convention.

In 1959, at a special session of the Baptist State Convention, Branch was nominated and elected general secretary-treasurer of the North Carolina Baptist State Convention. His installation service was held in the First Baptist Church, Raleigh on 30 June 1959. He succeeded Maloy Alton Huggins as the principal administrator and coordinator of the mutual but not always identical interests of 871,370 North Carolina Baptists and 3,310 self-governing and often vigorously self-sufficient Baptist churches.

While Branch was returning from an engagement at Chowan College, Murfreesboro, his car struck a stalled truck near Ahoskie and he was fatally injured. His funeral services were conducted 3 Feb. 1963 in the Forest Hills Baptist Church, Raleigh, and interment was in Memorial Park, Raleigh.