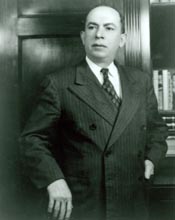 Herbert Covington Bonner, congressman, was born in Washington, Beaufort County, the son of Hannah Selby Hare and Macon Herbert Bonner, both of families that had resided in the coastal area since colonial times. He attended Warrenton Academy from 1906 to 1909 and then traveled small towns as a snuff salesman. He served overseas in World War I as a sergeant in the 322nd Infantry, Eighty-first Division, and after the armistice attended officers' training school at Longres, France.

In 1921, Bonner went to Washington as an aide to his neighbor, newly elected Congressman Lindsay C. Warren. In 1940 he was elected as a Democrat to the congressional seat representing North Carolina's First District, when Warren was named comptroller-general of the United States. Bonner served for nearly twenty-five years, until his death from cancer. He was chairman of the House Marine and Fisheries Committee, where he earned the title of "father" of the first nuclear-powered merchant ship, the Savannah. His legislative interests were directed toward subjects of concern to his sprawling district—Coast Guard appropriations, roads, navigation projects, and farm subsidies. While not an innovator, he backed such projects as establishment of Cape Hatteras National Seashore and the social programs of the Roosevelt and Kennedy administrations. During World War II he headed a committee that investigated war profiteering; he was an original member of the House Un-American Activities Committee but voted against making the committee a permanent one. Bonner was popular with colleagues and constituents and seldom faced serious political opposition. His extensive congressional correspondence and other materials were given to the Southern Historical Collection at The University of North Carolina at Chapel Hill.

Bonner, an Episcopalian, was married to Eva Hassell Hackney of Washington, who survived him. He was buried in Oakdale Cemetery just a few hundred yards from his birthplace. A portrait of him by Mabel Pugh hangs in the committee room of the Merchant Marine and Fisheries Committee, Cannon House Office Building, Washington, D.C.