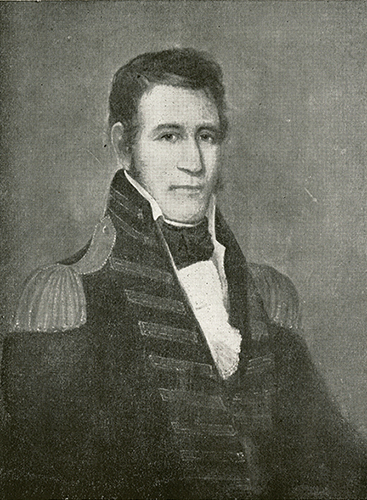 Johnston Blakeley, naval officer and hero of the War of 1812, was born near the village of Seaford in County Down, Ireland. His father, John Blakeley, emigrated with his wife and son to Wilmington when Johnston was two years old; John Blakeley's wife died on the voyage, and he and his son lived together for many years in Wilmington. Blakeley was educated at a school in Flatbush, Long Island, and from 1797–99 attended The University of North Carolina, where he was president of the Philanthropic Society. When his father died, Blakeley became the ward of Edward Jones of Rockrest, Chatham County. Left without funds by a disastrous fire that destroyed the Blakeley warehouses in Wilmington, Blakeley sought a career in the U.S. Navy and was appointed midshipman on 5 Feb. 1800. He served in the Mediterranean during the war with the Tripoli pirates, under Captain John Rodgers and Commodore Stephen Decatur; he was commissioned lieutenant 10 Feb. 1807 and on 4 Mar. 1811 assumed command of the schooner Enterprise. When war with England was declared in 1812, Blakeley was stationed at the Norfolk Navy Yard, and later he was sent to New Orleans. Becoming restless, he asked Edward Jones to intercede for a more active command for him. Through the influence of Congressman William Gaston and Senator James Turner, he was transferred to New Hampshire, where, on 19 Aug. 1813, the Enterprise captured the British privateer schooner Fly off Cape Porpoise, in Blakeley's first exploit.

Blakeley was promoted to command of the Wasp, under construction at Newburyport, described by one of its officers as "a beautiful ship, and the finest sea-boat, I believe, in the world." She carried twenty carronades and two long twelve-pounder guns, with a crew of 173. Blakeley was given sealed orders to sail to western Europe and create as much havoc as he could against British shipping, then to sail south to the Spanish coast, where the British were fighting Napoleon's armies, and finally to return to New Orleans. 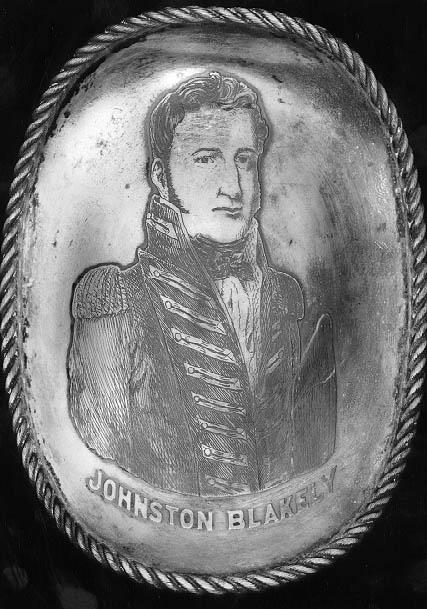 The Wasp sailed 1 May 1814 with "a fine breeze at North West." Officers and crew were described by one of them as "young and ambitious—they fight with more cheerfulness than they do any other duty. Captain Blakeley is a brave and discreet officer—as cool and collected in action as at table." During the cruise to European waters, Blakeley spent long hours training his sailors and gunnery crews. When he reached his cruising station, the British vessels Neptune, Reindeer, and Regulator were quickly defeated and burned; the William, the Orange Boven, and the Jenny were captured and scuttled; the commandeered neutral vessel Henrietta carried the wounded from the Reindeer to port. Of these engagements, the one on 28 June with the Reindeer, a twenty-one-gun brig, was the most noted. The battle lasted nineteen minutes. Although the Reindeer twice approached close enough to board, both times the Americans beat her off. Blakeley praised his crew's "cool and patient conduct . . . while exposed to the fire of the shifting guns of the enemy" and the "animation and order exhibited when actually engaged." The Reindeer "was literally cut to pieces, in a line with her ports; her upper works, boats and spars were one complete wreck." The following day, Blakeley burned the remains of the Reindeer and limped into the friendly French port of L'Orient, with his foremast, rigging, and sails "a good deal injured." Five men were dead and fourteen wounded. Well received in France, Blakeley attended to his wounded and repaired his vessel. Finally, after sending home some of his wounded with their share of prize money, Blakeley set sail again 27 Aug. 1814, heading for the coast of Spain to intercept British supply ships.

Quickly the Wasp captured the brigs Lettice and Bon Accord. Blakeley sighted a fleet of ten sail on 1 Sept., cut out and burned the brig Mary, laden with military stores, but was driven off by a seventy-four-gun frigate guarding the convoy. In the late evening of the same day he sighted four more sail and engaged the heavy brig Avon in a bitter fight lasting forty-seven minutes. The approach of three other brigs forced him to leave after receiving the surrender of the Avon but before his crew could board it. The Wasp drew off safely to repair her damage.

A lean three weeks followed, after which good fortune came again. Having seized the brigs Three Brothers and Bacchus, the Wasp captured the Atalanta, which was laden with wine, brandy, and silk. Since there was some doubt as to the nationality of the Atalanta, Blakeley did not follow his usual custom of burning her but instead put Midshipman David Geisinger and a prize crew aboard. On 22 Sept. 1814 the Atalanta set sail to Savannah, Ga., where she arrived safely in November. No further word was ever received from the Wasp.

Rumors flew to account for the mysterious disappearance of the valiant vessel. A privateer claimed to have seen the Wasp off the Canary Islands. The British frigate Lacedemonian was believed by some to have sunk her off Charleston, S.C. John C. Calhoun heard a report that she was operating in the Pacific Ocean. Blakeley was promoted to post captain, but he and his men never returned. 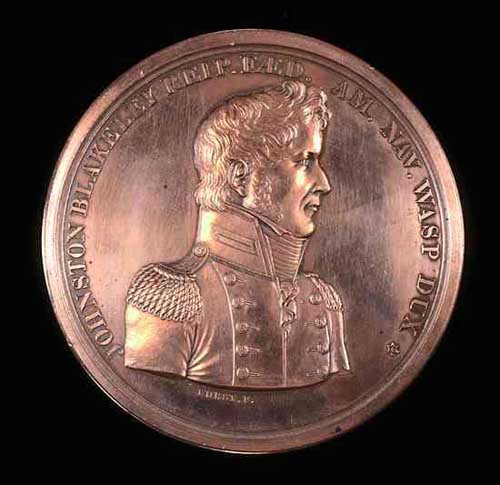 Blakeley was married in Boston to Jane Ann Hoope on an unknown date; they had one child, a daughter named Udney Maria, born in January 1815 after her father's disappearance. His widow remarried in 1820 and eventually moved to the island of St. Croix, where she had lived for a time as a child. Congress voted Blakeley a gold medal, and the North Carolina legislature in 1816 authorized a sword to be given to Mrs. Blakeley and offered to pay for the education of his daughter. Mrs. Blakeley suggested that a silver tea service would be more suitable for Udney Maria; accordingly, a suitably inscribed service was presented. The daughter attended school in Philadelphia, remaining there until 1829. She joined her mother in St. Croix, married Baron Joseph von Bretton in 1841, and died in childbirth together with her infant, 2 Mar. 1842.

Blakeley's portrait is at the Philanthropic Society Hall at The University of North Carolina in Chapel Hill. A poem written in 1854 may serve as a fitting epitaph:

No more shall Blakeley's thunder roar
Upon the stormy deep;
Far distant from Columbia's shore
His tombless ruins sleep;
But long Columbia's song shall tell
How Blakeley fought, how Blakeley fell.

Johnston's mother, Mary Bleakly, and 9 month old son, John, are buried in the graveyard of St. James Parish Church, 125 S. 3rd St, Wilmington, N.C. I am giving you the name as it is spelled twice on the gravestone. The date of her death on the stone is Jan 16, 1787. It says she was 29 years old. I will send you a photo of the gravestone if you would like to have it.