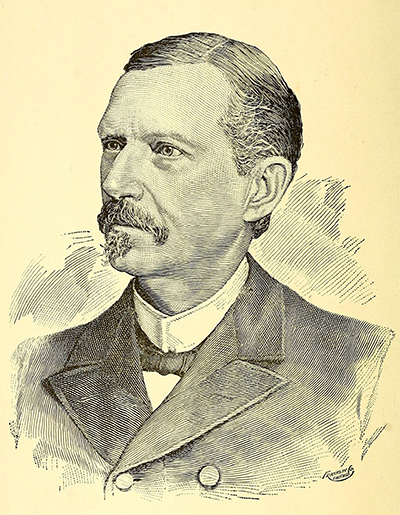 Christopher Thomas Bailey, editor and clergyman, was one of ten children born to William Moody and Alice Clarke Bailey of James City County, Va. His parents were of Scottish and Welsh descent, the elder Bailey's father, Anselm J. Bailey, having settled on Virginia's eastern shore in the late eighteenth century. William Moody Bailey was a successful farmer before removing to Williamsburg for the sake of the education of his younger children.

Bailey completed his preparatory education at Williamsburg Academy and then entered the College of William and Mary, intent upon pursuing the legal profession. But frequent attendance at religious services of a group of blacks in the community, where he was often called upon to read the Scriptures for the illiterate pastor of the congregation, had made a deep impression upon him. Accordingly, he transferred to Richmond College in 1856 to study for the work of the ministry and remained a student there until the summer of 1859.

The Sunday School and Publication Board of the Baptist General Association of Virginia employed young Bailey as a colporteur for a few months in 1858–59. He was ordained to the full work of the ministry upon being called to the pastoral care of Moore's Swamp Baptist Church, Surry County, Va., in 1859. Although exempt from military obligation, Bailey spent a good portion of the Civil War years with the Sixteenth Virginia Infantry and Thirteenth Virginia Cavalry, while performing occasional pastoral functions for Baptist churches in Surry and Sussex counties.

In July 1875, Bailey purchased the interest of A. F. Redd in the Biblical Recorder, the Baptist weekly published in Raleigh, of which he was later to become both editor and sole proprietor. This work occupied his remaining days and elicited his most significant work. Under his management, the circulation of the Biblical Recorder rose from less than two thousand subscribers to almost seven thousand. His editorial policy was ably expressed in the issue for 11 Aug. 1880, when he wrote: "In our editorials we have sought to be practical and have written on those subjects which bear on Christian conduct, Christian character and growth in grace and usefulness. We have not introduced into our column's [sic ] those subjects which are calculated to engender unending controversies." Accordingly, Bailey generally addressed his editorial comments to some subject designed to encourage growth in faith and piety, to some particular tenet of the Baptist denomination warranting explanation or defense, or to matters of church polity and practice. Nevertheless, he sometimes placed the weight of his editorial opinion behind measures of more general appeal and interest. Thus, one finds occasional editorials calling for the election of legislators committed to enlarging and strengthening the free school system (8 Aug. 1880), favoring the Prohibition Bill of 1881 (1 May 1881), opposing a free tuition plan for The University of North Carolina (25 Feb. 1885, and 11 Mar. 1885), and opposing state aid to higher education (24 Oct. 1894).

He took an interest in all the affairs of the North Carolina Baptist State Convention and of the larger Baptist denomination. He served as president of the Baptist State Convention (1885–86) and as a trustee of Wake Forest College (1877–95). He was instrumental in the formation of the North Carolina Ministers' Life Association in 1883, the earliest effort of Baptists in North Carolina to make adequate provision for aged or indigent ministers and their families. As editor and publisher of the annual North Carolina Baptist Almanac (1882–92), he was instrumental in collecting and preserving much valuable biographical and historical data concerning the denomination. Wake Forest College recognized Bailey's work by awarding him the D.D. degree in 1884.

Stricken with a partial paralysis while preaching at the Fayetteville Street Baptist Church, Raleigh, on 6 Mar. 1892, Bailey suffered a decline in health that left him unable to return to his office after 1 Nov. 1894. He died several months later and was interred in Oakwood Cemetery, Raleigh. Columbus Durham, writing in the pages of the Biblical Recorder for 12 June 1895, called him the "most successful editor the Baptists of North Carolina ever had."