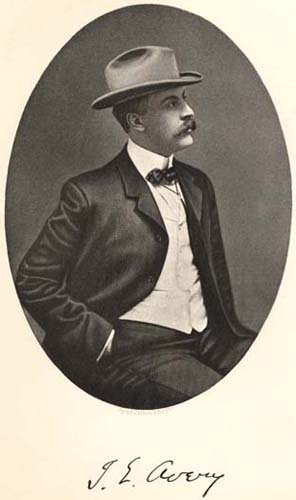 Isaac Erwin Avery, Foreign Service officer and newspaperman, was born at Swan Ponds, Burke County, the second son of Alphonso Calhoun and Susan Morrison Avery. His parents moved to Morganton when he was very young, and there he attended primary schools. He was prepared for college by the Reverend John A. Gilmer at the academy in Morganton and might have entered college at the age of sixteen, but he chose to remain at home for a while, devoting most of his time to reading. He entered the sophomore class of Trinity College, then located in Randolph County, which later moved to Durham and is now Duke University. At Trinity he displayed a fondness for history and literature, was an excellent football player, and was universally liked by faculty and students. During his senior year he read law under his father, who was teaching law at Trinity; he was licensed in September 1893.

While he was regarded by all who knew him as possessing a mind especially fitted for the law, his tastes and talents constantly drove him toward newspaper and more general literary work. He was editor of the Trinity Archive at college, and correspondent for several newspapers in the state. The first contribution that earned him money was a paragraph of about thirty lines sent to "Town Topics," without expectation of payment, during the Christmas vacation of 1892, for which he received ten dollars.

After being licensed to practice law, Avery returned to Morganton, where he was employed by W. C. Erwin as associate editor of the Morganton Herald. He attracted much outside attention by his original methods and the excellent humor in many of his articles. He accepted an appointment as secretary to the consul general at Shanghai from President Cleveland and left for China in March 1894. In less than a year he was appointed vice-consul general at Shanghai, an office he filled until the spring of 1898, when a new consul general was named by President McKinley. In China he was a regular contributor to the North China Daily News, the leading English paper in the Orient. 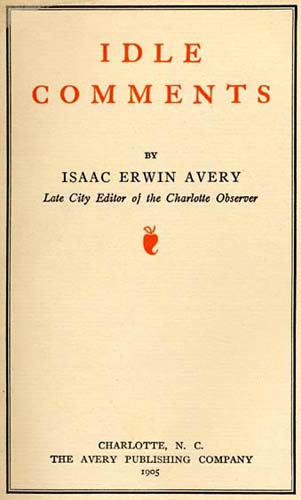 A few months after his return to North Carolina, Avery took up active newspaper work, reporting the proceedings of the state senate of 1899. About 1 May 1899 he moved to Greensboro and established a news bureau, representing a number of leading papers in North Carolina and elsewhere. Through his activities as a reporter his reputation grew, and on 1 Jan. 1900 he became city editor of the Charlotte Observer, a position he held until his death.

As city editor, he was free to criticize or commend the public acts of men who came under his observation, and he became widely known for the way he handled stories of human interest, either pathetic or humorous. As a miscellaneous news-gatherer he was also highly successful. He was regarded as a masterful interviewer and was in demand for meetings and news events.

More significant than his work as reporter, interviewer, or editorial writer was his "Variety of Idle Comments," a department of the Observer that appeared on Monday mornings; upon this department his fame largely rests. A collection of his writings was published in book form, the year following his death, under the title Idle Comments.

Avery never married but was engaged at the time of his death, which apparently was by suicide. Contemporary rumor said that there was a "Madame Butterfly" in his past and that a friend of his was to tell his fiancée of the past prior to the marriage.

I found a copy of IDLE

I found a copy of IDLE COMMENTS among my grandmother's books. This copy however, belonged to my great-grandmother, Frances Douglas Lyle, who lived in College Park, GA, a suburb of Atlanta.
I have lived in Charlotte, NC for more that 50 years and was intrigued with the articles included in this book , which were various editorials by Mr. Avery. When I entered the name ISAAC ERWIN AVERY, in an effort to look up background information about this editor of the Charlotte Observer, I found two men with the same name, separated by nearly 50 years.
My question is, were these two men related? They were both North Carolinians, both attended UNC, My guess is that the older Isaac Erwin Avery was an uncle to the younger.

Thank you for this interesting question--I think it is one that many people have. You are correct about the relationship of the two men: the elder Isaac Erwin Avery (1828-1863) was the brother of Alphonso Calhoun Avery (1835-1913), who was the father of the younger Isaac Erwin Avery (1871-1904). You can find more information about the Avery family in the "Biographical Section" of the finding aid for the Avery Family of North Carolina Papers: http://finding-aids.lib.unc.edu/00033/.