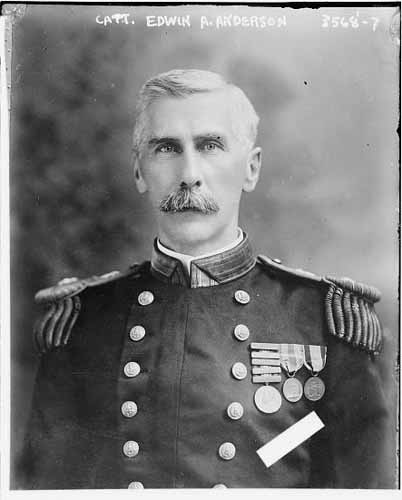 Edwin Alexander Anderson, rear admiral of the U.S. Navy and winner of the Congressional Medal of Honor, was born at Masonboro Sound near Wilmington. He was the son of Dr. Edwin Alexander Anderson (1815–94), who married in 1842 Mary Coit Lillington (1823–97), daughter of Major John A. and Mary Hill Lillington. In an adventurous career that spanned five decades, Anderson was thrice decorated for gallantry and became one of the nation's best-known naval figures.

In 1878 he was appointed by Alfred M. Waddell to the Naval Academy and was graduated in 1882. Over the next fifteen years he advanced to the rank of lieutenant, serving on vessels that took him to all parts of the world. He witnessed a revolution in Haiti, when he was invalided there with pneumonia, and served for three years on ships protecting the sealing trade in the Bering Sea and along the Alaskan coast. In 1891 he took part in a scientific expedition in the Pacific waters around the Galápagos Islands. He served aboard the steamer Albatross when it made the first survey of a cable route between California and Honolulu.

At the outbreak of the Spanish-American War in 1897, he was ordered to the Marblehead, a ship then blockading the port of Havana. This vessel was later blockading the port of Cienfuegos when it engaged and captured a Spanish steamer, the Argorata. On 11 May 1898, while in an open boat and exposed to very heavy shore fire, he successfully cut the submarine cable lines in the port of Cienfuegos. For this act he was advanced in rank and won a medal of honor from President McKinley. He also saw action in the blockade of Guantánamo Bay and in engagements with other Spanish ships.

After the war he served for a time in China, where he took part in quelling the Boxer Rebellion of 1900. He later served with the American fleet in Panama and was honored by that republic for his meritorious service. In 1915, with the rank of captain, he commanded the New Hampshire during the occupation of Veracruz in Mexico. He went ashore in command of a regiment of Blue Jackets and Marines and for extraordinary heroism in this engagement was awarded the Congressional Medal of Honor.

During World War I he served as brevet admiral of the American Patrol in European waters and was awarded the Distinguished Service Medal. After the war he was named commander in chief of the Eastern Fleet, with the full rank of rear admiral. At the time, this was the highest military rank ever achieved by a North Carolinian in the service of the United States.

His fame reached its height during the terrible earthquakes that devastated Japan in 1923. As Eastern Fleet commander, Anderson ordered his ships quickly into Japanese ports and assisted the stunned Japanese with food and supplies. He personally directed the distribution of $5 million in emergency supplies to the Japanese nation, an act which brought world acclaim and helped save many lives. Each year thereafter, the government of Japan bestowed on him a special gift or memento at Christmas as an expression of gratitude.

In 1888 he married Mertie Mosely Lorain, of Baltimore, Md. Their only child, Lorain Anderson, also a Navy officer, rose to the rank of lieutenant commander.

In 1926, Anderson retired from naval service to his home near Wilmington. In his late years he was an honored figure and often a guest speaker at local or state functions. He died at James Walker Memorial Hospital in Wilmington following a major operation there and was buried at Arlington National Cemetery, Washington, D.C.