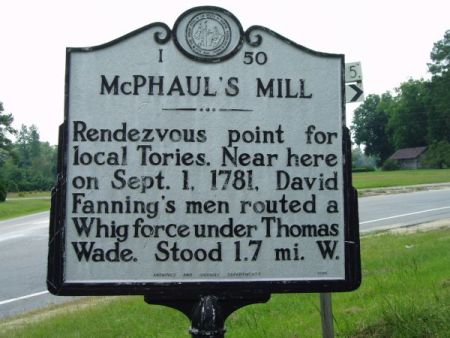 Bettis's Bridge (also known as Betti's or Beattie's Bridge), located near the present crossing of the Lumber River (formerly Drowning Creek) by U.S. Highway 401 between Raeford and Wagram at the Hoke County-Scotland County line, was the site of one or more skirmishes between Whig and Loyalist forces during the last days of the American Revolution. The battle has also been called the Battle of Drowning Creek and the Battle of McPhaul's Mill. The bridge, with a narrow causeway through Raft Swamp on both sides of Drowning Creek, was one of the few places where the stream could be crossed with relative ease, and the causeway formed an ideal place for ambush.

Confusion created by conflicting reports by participants, misnaming of geographic locations, and differing interpretations by later writers make it impossible to say with certainty when and where these skirmishes took place, but it appears that there may have been at least two encounters at Bettis's Bridge. The action of 4 Aug. 1781 was brought on by Col. Thomas Wade and his Anson County militia, who were determined to disperse a rumored large Loyalist muster at McPhaul's Mill. Wade pursued the Loyalist force, commanded by Cols. Hector McNeil and Duncan Ray, to Bettis's Bridge, where in an evening engagement that ended at midnight the Loyalists were defeated. Wade had 4 men wounded, and the Loyalists suffered 12 killed and 15 wounded.

The more significant Battle of Bettis's Bridge of 1 Sept. 1781 again involved Wade, who had followed up his previous victory by ravaging the Loyalist region with a large militia. Hearing word of a post of Loyalists with Colonel McNeil near Bettis's Bridge, Wade rode to attack them. Col. David Fanning, the noted Loyalist commander, was passing through the area en route from Wilmington to his interior command in Randolph and Chatham Counties. On receiving word that the Loyalists were defeated at Elizabethtown and that Wade was threatening McNeil, Fanning responded immediately to reinforce McNeil, arriving at dawn on the day of the battle. Although sources differ on the numbers engaged on both sides, there is agreement that Fanning faced a force twice the size of his command, and he credited Wade with 450 men.

After crossing a causeway in the swamp, Fanning dispatched McNeil to the right flank of Wade's position on a nearby hill to block the Whig escape route over the bridge. Fanning then proceeded to the Whig left flank, but an accidental discharge of a musket prematurely began the action at 11:00 a.m. Vigorous assaults over 90 minutes finally unnerved the Whig line, and it broke into a headlong, confused flight. Fanning's men pursued the Whigs for seven miles, taking 50 prisoners and 250 horses. The battle was superbly conducted by Fanning and would have resulted in the total destruction of Wade's force had McNeil succeeded in blocking the retreat as he was ordered. Fanning had 4 wounded and 1 man killed. He counted 23 Whig dead. This victory suppressed the Whigs in southeastern North Carolina and emboldened the Loyalists under Fanning to attack the temporary state capital at Hillsborough 12 days later.

Blackwell P. Robinson, Battles and Engagements of the American Revolution in North Carolina (1961).

The link to the roadside

The link to the roadside monument is broken or incomplete.

Thank you for visiting NCpedia. I've updated the link with the new url. Thanks for letting us know about it.