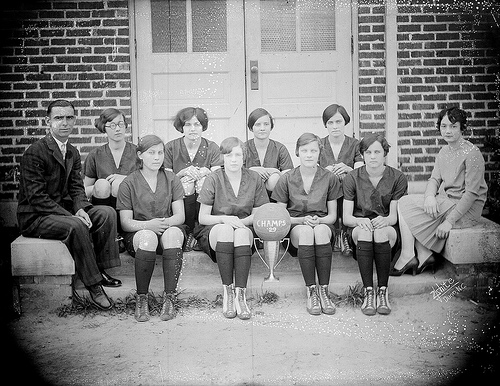 The game of basketball is much more than a popular spectator and participant sport in North Carolina. Like football in other southern states such as Texas and Alabama, basketball is a statewide obsession that cannot be understood purely by focusing on the histories of individual players, coaches, and teams, statistics for participation in youth and recreational leagues, or other traditional measures. From the sport's first appearance in the late 1890s, basketball has been a vibrant and influential strand in North Carolina's cultural fabric.

The date of the first organized basketball game in North Carolina is not known, but the sport initially appeared in local YMCA s during the 1890s, possibly through the efforts of Charlotte YMCA official John Mahan, who had played in the first games organized in Springfield, Mass., by basketball's inventor, James Naismith. Within a few years, the game was being played at virtually every level of competition. Amateur and recreational games were sponsored by the YMCA and Amateur Athletic Union, and schools were encouraged to adopt the game as a part of their physical education programs. The North Carolina High School Athletic Association was founded in 1912 and has sanctioned state basketball championships since 1915. By 1920 virtually every college and university in the state had a men's team.

Records conflict about the date and location of the first intercollegiate men's game played in the state, but it seems certain that Wake Forest College was one of the participants. Information from that school's archives points to a game played on 6 Feb. 1906 at Guilford College in which the home team defeated Wake Forest by a 26-19 score. But official athletic department records at Duke University (then Trinity College) state that the first game in the state was played between Trinity and Wake Forest on 2 Mar. 1906, with Wake Forest prevailing 24-10.

Basketball was a popular addition to student life at North Carolina's women's colleges from its earliest years of existence. By the 1920s girls' high school teams were also widespread. The first recorded intercollegiate game in Charlotte was played in April 1907 between two women's colleges, Elizabeth College and Presbyterian College; reporters from the Charlotte Observer described the game from second-hand accounts, however, because no one from the all-male reporting staff was allowed to observe. While female athletes were expected to dress modestly on the court during this period, usually in skirts and bloomers, basketball offered young women a rare opportunity for equal access until the 1950s, when they were increasingly steered into more "feminine" activities such as cheerleading. Nevertheless, the women's Hanes Hosiery team of Winston-Salem earned national acclaim by winning the National American Amateur Association championship in 1951, 1952, and 1953.