The men's 1974 NCAA Final Four was held in Greensboro, where N.C. State, coached by Norm Sloan, upended seven-time defending champion UCLA in a dramatic semifinal game and captured the championship against Marquette. Sloan's Wolfpack team was led by schoolboy legend and Boiling Springs native David Thompson, a three-time All-American who today is generally regarded as the greatest high school and collegiate player the state has produced. Two years later, UNC coach Dean Smith led the U.S. men's team to the Olympic Gold Medal in basketball, with a squad that included several UNC players-among them Rocky Mount's Phil Ford, UNC's own three-time All-American and 1978 National Player of the Year. Smith, whose legendary system stressed unselfish team play, intelligent decision making, and precision passing, also coached UNC to the NCAA championship in 1982 and 1993 before retiring in 1997 with the most wins (879) in NCAA Division I coaching history. Smith's 1982 championship was famously won with two plays involving North Carolinians-the game-winning shot by then-freshman and Wilmington native Michael Jordan, and an errant pass secured by Gastonia native James Worthy. Worthy would go on to a successful career with the Los Angeles Lakers of the NBA. Jordan used his three-year career at UNC as the launching pad for even greater heights, becoming arguably the most famous male athlete of all time, in any sport, after a long career in professional basketball with the NBA Chicago Bulls and Washington Wizards. The list of other North Carolina natives who have gone on to success in college and professional basketball grows longer by the year. 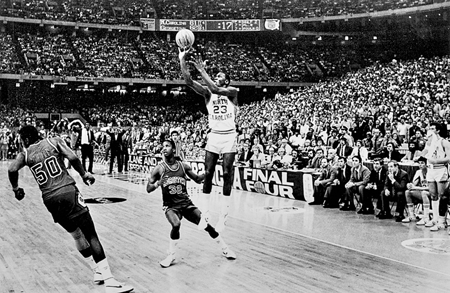 North Carolina State, coached by Jim Valvano, surprised the basketball world by capturing the NCAA title again in 1983, defeating the University of Houston 54-52 in what many consider the greatest upset in NCAA tournament history. Duke coach Mike Krzyzewski arrived in Durham in 1981 and subsequently coached the Blue Devils to numerous Final Four appearances, winning NCAA titles in 1991, 1992, and 2001 with teams that stressed defensive intensity and excellent perimeter shooting. In 2005 Asheville native Roy Williams coached UNC to the school's fourth national title.

North Carolina's first major professional basketball team, the Carolina Cougars, played in the ABA from 1969 through 1974. The Cougars divided their home games among Charlotte, Greensboro, and Raleigh, boasting a roster than included many players who had starred at local area colleges. The Cougars enjoyed good attendance and fair success on the court until owners moved the franchise to St. Louis in 1975. The Charlotte Hornets returned professional play to the state in 1988, greeted by an enthusiastic reception by fans. But a series of disputes between the team's owners and Charlotte leaders led the owners to relocate the franchise to New Orleans in 2002. A second NBA franchise, the Charlotte Bobcats, began play in 2004 under owner Robert Johnson, the first African American to own a major professional sports franchise. As a franchise in the Women's National Basketball Association, the Charlotte Sting played their first season in the summer of 1997, during which they achieved a 15-13 record and earned a trip to the playoffs.