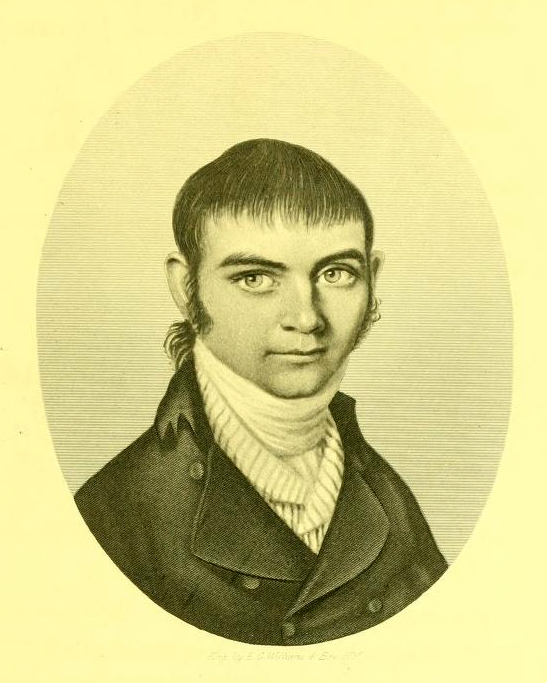 Thomas Amis (pronounced “Amy”), merchant and entrepreneur, patriot officer in the Revolutionary War, delegate to the Provincial Congress and member of the North Carolina General Assembly, was born in, most likely, Halifax County or Northampton County sometime between 1730 and the mid-1740s.  Some sources suggestion the early 1730s and others, including a gravestone, suggest 1744. He is believed to be the last of nine children of John Amis (1724-1764) of French descent and Mary Dillard Amis (b. 1726). However, other sources indicate that he was the son of Thomas Amis.

In any event, Thomas Amis’ notable history took place during and after the Revolutionary War. Amis served as a member of the Provincial Congress from Bladen County in 1776 and was also appointed as a justice of the peace for North Carolina. He served as a superintendent of the commissary with a rank of captain for the 3rd Regiment of North Carolina Continental Troops representing the district of Wilmington and also had at one point responsibility for finding continental army desserters. Following his service in the Continental Army, Amis became a member of the Society of the Cincinnati.

The western lands of North Carolina (now in Tennessee) were claimed by the state of North Carolina in 1780 and used to compensate soldiers and military suppliers instead of cash payments. After being displaced from his Bladen County home by British invasion in 1780, Amis relocated to the frontier of then western North Carolina after petitioning for and receiving a grant of one-thousand acres on Big Creek in the Holston River area in what became Hawkins County. He may have participated in General John Sevier's State of Franklin campaign but subsequently represented Hawkins County in the North Carolina General Assembly. The 1887 History of Tennessee indicates that Amis also participated in restoring Sevier's citizenship following the failure of the State of Franklin. In 1789 Amis delivered a petition to the North Carolina General Assembly for creation of a town at the Hawkins Courthouse settlement. The approved town became Rogersville (in present day Tennessee).  Amis commissioned architect Thomas Harlan to build a fortified home near present day Rogersville. The home featured eighteen inch thick stone walls and rifle ports in place of windows on an upper half story.  At over 200 years old and structurally sound, the home still stands today.

Amis became a highly successful merchant and entrepreneur after the Revolution. Analysis of his business ledgers by Lucy K. Gump indicates that he developed a fairly complex enterprise utilitzing the barter system that included the development and resale of commododities from local crops and goods, particularly corn. He opened a trading post, blacksmith shop, saw and grist mill, and distillery, which seems to have been his most profitiable enterprise. His business ledgers also indicate horse breeding and providing tavern and stable services for travelers, among whom were Governor William Blount and Andre MIchaux, the French botanist credited with the discovery of the Magnolia macrophylla in 1789.  He may have traded with Native American traders and may also have participated in trade well down the Mississippi with the Spanish, as Edwin Sparks reported in his 1904 The United States of America. Sparks noted that North Carolina trader Thomas Amis lost a fully loaded flatboat at Natchez when it was taken by the Spanish.

Thomas Amis spent the final decade of his life in his community operating his various business interests and providing services to pioneers who travelled through the area. His will was reportedly the first recorded will in Hawkins County, Tennessee. Captain Thomas Amis passed away December 4, 1797, and, along with both of his wives, is buried in Amis Cemetery near the stone house built by Thomas Harlan. This location is approximately three miles from present day Rogersville, Tennessee.

I am Registrar of Dallas

I am Registrar of Dallas Chapter of SAR. I am working with a man who believes he is descended from Thomas Amis. Have found his ggrandmother Matida Amis born abt 1855 and her parents James Amis born about 1818 and wife Susan.

Do you have male descendants of Thomas Amis that might help make connections?

Hi, I'm trying to get into

Hi, I'm trying to get into contact with Sam Starnes or Kelly Agan. My father and I have been tracking our family back and we believe Thomas Amis is a great grandfather of ours. I'd like to learn more about him if at all possible.

Thanks for visiting NCpedia and taking time to share your family history.  I contributed to this entry on Thomas Amis, and I do not believe that anyone has compiled a book-length publication on Thomas Amis so his history is distributed among government records for both Tennessee and North Carolina.  The work I did for the NCpedia was not exhaustive of these sources by any means so there is definitely more work to be done!  Here are some suggestions for places to start:

1.  Visit the citations and additional resources listed under the article.  One of the sources, The Colonial and State Records of North Carolina, is available online (with a link) -- this source can be searched for references to Amis in the governmental history of the colony and state. Other sources that are not online may be available at a local library (or through interlibrary loan from your local library).  You can also search resources on WorldCat, a global library of book holdings at libraries around the world, which can help you locate libraries that have particular works -- https://www.worldcat.org/).  There are also historical records related to Thomas Amis at the State Archives of North Carolina.  Here is a link to search results from their catalog -- http://mars.archives.ncdcr.gov/DisplaySearchResult.aspx.

2.  Here is a link to the National Register of Historic Places nomination form for the Amis house in Hawkins County, TN -- http://focus.nps.gov/pdfhost/docs/NRHP/Text/73001786.pdf.  These forms often have well-researched background history on places and people and can give you insights into other places to search.

3. Here is a link to an entry on Hawkins County, Tennessee from the Tennessee Encyclopedia of History and Culture -- http://focus.nps.gov/pdfhost/docs/NRHP/Text/73001786.pdf.  Unfortunately, they do not have a specific entry on Amis but this entry does mention him and his role as a founder of the county.

4.  Here is a link to the Tennessee State Library and Archives -- http://sos.tn.gov/tsla.  You may find information in their digitized collection and they may also be able to help you research Thomas Amis history in Tennessee more.  The Tennessee Historical Society will be able to assist with research as well -- http://www.tennesseehistory.org/.

5.  The N.C. Government & Heritage Library (at the State Library of North Carolina) also has collections for family history researchers and genealogists.  Here is a link to our resource and services page for genealogy research -- http://statelibrary.ncdcr.gov/ghl/resources/genealogy.html.

I hope this helps!  Please let me know if we can help you with additional North Carolina research.

I believe the proper spelling

I believe the proper spelling of the middle names of the children of Thomas Amis and Alice Gale are "Gale" like their mother.